A Case For Pedestrian Wust el-Balad

A statue of Ibrahim Pasha stares down the Opera Square, seated over primal traffic and tumbleweeds of litter. Garden City is tight-knit and knotted, padded with congestion. Wust el-Balad – the pulse of Cairo – remains buried in car exhaust, mourning itself. Scattered between modernity’s advancements, are relics and heritage sites that now seem out of place.

At Maspero, two German girls interlock arms and try to cross an infamously busy road, a single heartbeat between them. I recall putting those girls in that situation and wondering if I had unintentionally put them off Cairo for life.

It was a balmy summer night, with mastic gum and neon felucca rides; Laila Ramzy, a friend of mine with a quick wit and cautious temperament, was hosting two visiting Germans she’d grown close to. I offered to walk them back to my apartment for tea, and lost to their own excitement, they agreed – save for Ramzy herself.

Being Egyptian, she knew what Cairo’s streets had to offer: nothing good and nothing beautiful. I insisted, and perhaps I shouldn’t have.

Egypt’s capital has evolved into an unfortunate battery of sound and fumes, and although not entirely neglected, an ever-growing population has pushed greenery into yellowing and forced small shops to retreat into alleyways in favor of wider streets.

A Cairo traffic congestion study notes that the Greater Cairo Metropolitan Area (GMCA) is home to upwards of 19 million registered inhabitants – a fifth of the country’s entire population. It’s no surprise that over the years, measures have been taken to move people out of the capital and into satellite communities such as the 6 October, New Cairo, and most recently, a new capital rooted outside the GMCA.

The same study calculates a bizarre, unimaginable increase by 2027: in just a handful of years, Cairo will be home to over 24 million individuals – a number so absurd for a single city, it is hard to fathom. It is hard to fathom that, once upon a day, the Cairene center was designed and defined for the pedestrian: the walker, the cyclist, the mother running errands and the karkade street vendor.

This increase has come hand in hand with a profound loss of individual autonomy and ease of movement; Egyptians have become reluctant to walk the streets, even more so within the city center. Rather, those who walk, walk for lack of options; they don’t do so to indulge the beauty of a now tragic Cairo.

Though bleak-seeming, hope is not lost. Egypt’s 2030 vision, a goal-oriented view in line with the United Nations’ Social Development Goals (SDGs), aims to inspire a more aware and sustainable generation; there is no better place to start than the preservation of heritage – than moving towards a pedestrian-only Cairo center.

Khedive Ismail doesn’t carry the fondest reputation in Egypt, but what little good can be said about him comes embodied in architectural innovation. During a period of cultural fault lines, Egypt struggled to navigate its own identity between colonial powers and shifting political tides. The era was an ideological mosaic, and the Khedive’s ideal was born from its chaos: a Europeanized Egypt, a Cairo that drew on delicate Italian sensibilities and cobbled English streets.

Cairo became a study in multiculturalism by the late nineteenth century, a “manifest[ation] of the ragged edge of the British empire.” Wust el-Balad was something of a vibrant melting pot of ingenuity; architects from across the world and the empire were active participants in breathing life into the city.

Central Cairo was designed as a reimagination of avenues in London and Paris – and today, is more reminiscent of their catacombs than their charisma. Though the celebration of a colonial past is questionable at best and out of line at worst, it is worth re-examining the historical value behind these locales.

Cairo was, after all, the “contact-zone” of cultures – and that in and of itself is telling of the Egyptian disposition, making it all the more worthy to preserve.

Garden City and Wust el-Balad in particular were Khedive Ismail’s personal pet projects. Extraordinary feats of craftsmanship, their streets express a different Egyptian ideal than that of Coptic Cairo and more postmodern renditions of Egyptianism (e.g. Misr el-Geddida, Madinet Nasr). This is not meant to be an ode against modernity, but an invitation to preserve heritage that exists within our grasp.

Accordingly, any motion towards preservation must consider pedestrianism. It filters under the acknowledgement that there is both public and state-level responsibility to preserve “historic and aesthetic value” in prime locations.

Much like side-streets in Amsterdam, Wust el-Balad was not designed for the volume of people and vehicle traffic it now sustains. It’s evident at every turn; stone detailing has been knocked off buildings and fine plaster continues to peel without hope for renovation. Fumes and car exhaust have not only created a claustrophobic environment but have contributed to the decay of the architecture itself. 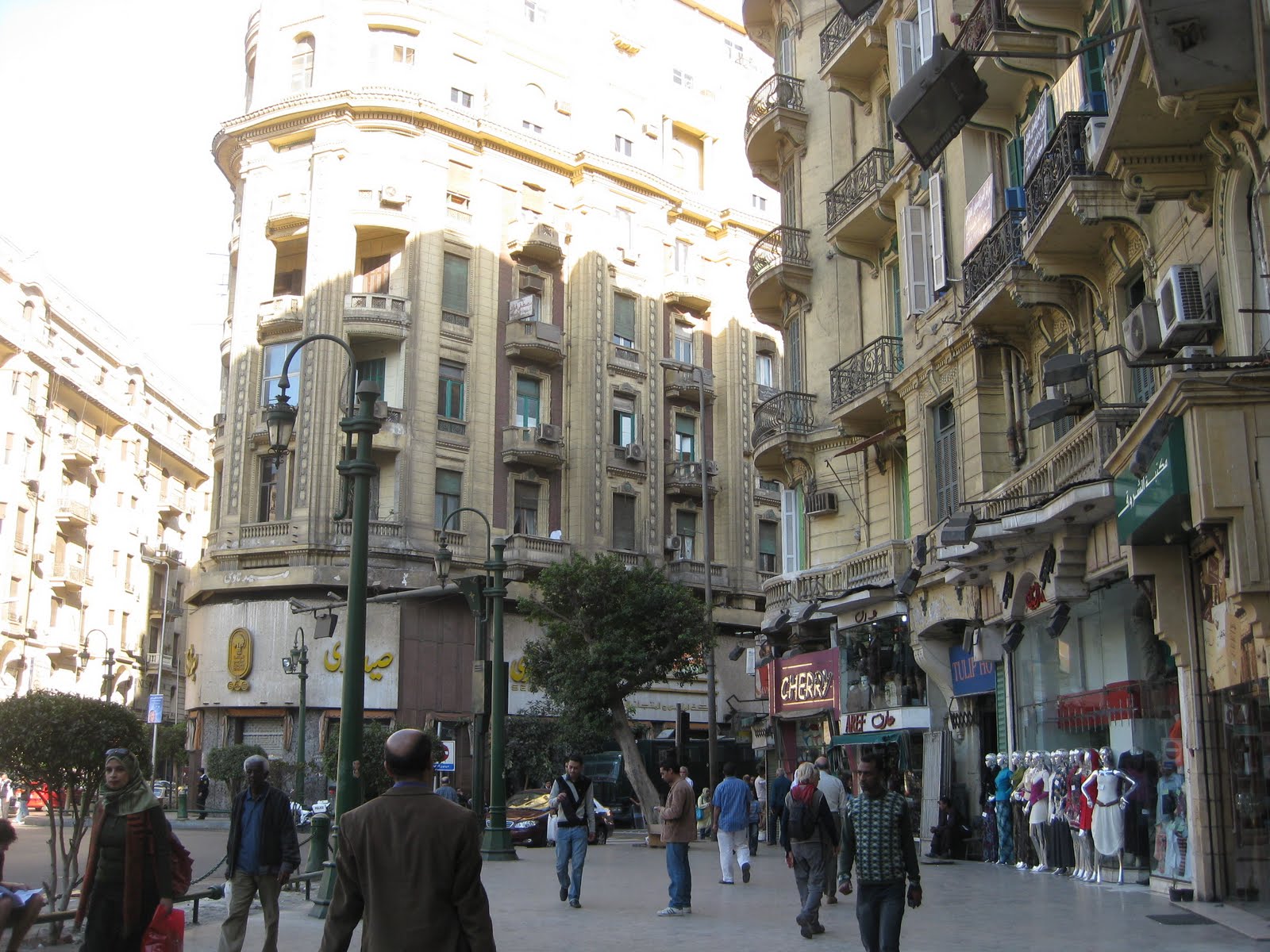 Cairo has long since grappled with the pressure to conserve heritage, with conflicting results. Best placed in a study on Egypt’s heritage control, “[it’s] a myth that the more heritages a country own, the better [off] it would be.” Rather, heritage sites have transformed into economic burdens as their state continues to deteriorate. This fact alone speaks volumes; producing new, sleek and sexy cities is good and well, but motioning towards damage control in age-old locations is essential.

It is not ambitious to suggest that Wust el-Balad would fare better closed off to vehicles and left open to on-foot traffic. This isn’t an unheard of suggestion, either; the government itself considered similar eco-efficient, pedestrian-friendly plans for Maspero – only to scrap them all in a rush towards Gulfie skyscrapers and spunky polished skylines.

“In Europe you always find that the older neighbourhoods are the most appealing to tourists. This is what we’re suggesting – the merging of an old neighbourhood in the middle of the modern city,” commented Ahmed Zaazaa, an architect and member of the urban research institution Madd, when asked about heritage preservation by Al Ahram.

It is understandable to have concerns. Cairo’s a massive function of many districts, and getting around it is in no way an easy feat without decent transportation. Cairo, however, is not Wust el-Balad; Wust el-Balad is a microcosm of Egypt in the nineteenth century, and while it contains independent businesses and residentials, it’s no metropolis in need of trucks and corporate parking garages.

Presently, most drivers use Wust el-Balad as a shortcut rather than a destination – and those who intend on lingering, spend most evenings on the prowl for a parking spot. It makes little difference from an infrastructural perspective to shift gears and create alternate, more efficient roads to accommodate an ever growing population.

Given the current cabinet’s odd love for bridges and new roads, now is a grand time to start considering it.

With the current El-Sisi cabinet focusing most of its efforts on road development and city graphing, this will simply be another project on the road to a greener, more historically-intact Cairo.

A Note on Chaos Management & the Climate

The elephant in the room is starting to push up against the walls and make a fuss; it is time to address climate change, and Egypt’s 2030 Vision. New locations promise greener infrastructure, promise a move from dingy, dusty downtown into emerald cities. That is good and well, but sweeping centuries of history under the rug is – well, a lukewarm, devastating pseudo-solution.

Moreover, it is lazy.

This move towards outskirts locations – be it new capitals or New Giza or new-something-elses – should be seen as an opportunity to alleviate pressure and damage off a weary Cairo. Rather than simply forget about a millennia worth of heritage, this move should come with goals of preservation and renovation, should see the only capital – or the niche parts of it in need of desperate attention – get the funding and planning they’ve long since waited for.

A pedestrian Wust el-Balad is not the be-all, end-all solution to Cairene pollution. Angels won’t belt out in song when cars are banned, but what will happen is a gradual, aesthetic shift that will return a city to its citizens. It will increase quality of life, limit carbon emissions and reactivate indie commercial life within the heart of a capital that has served Egypt well.