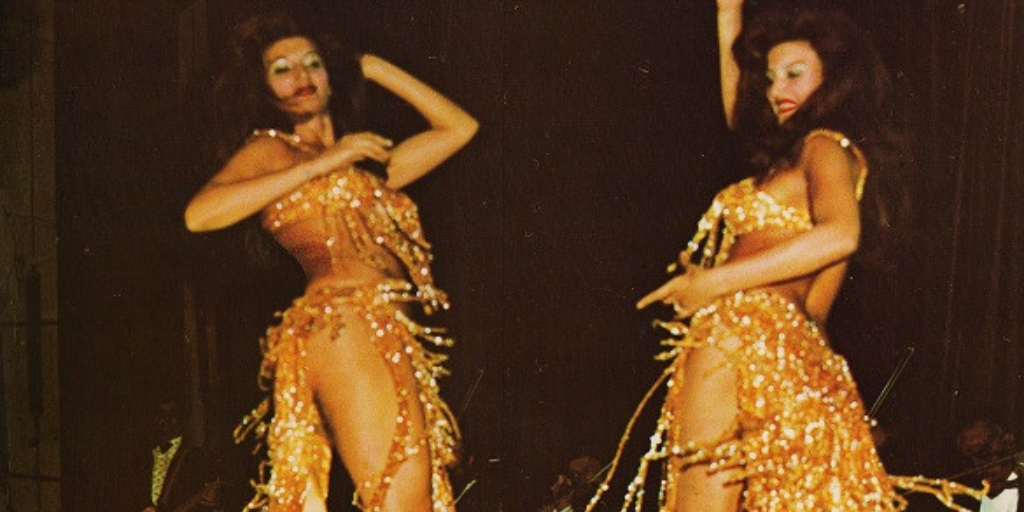 A wedding, a henna (bachelorette party), a birthday party, a bedroom, or even during lunch breaks in abandoned middle-school classrooms: these are all places where the infamous sound of Shik Shak Shok rings as girls and women of all ages dance freely, unabashedly.

“[Shik Shak Shok was] my five minutes of fame. When I was young at weddings, my mom would make me stand in the middle and perform,” answers Mai Ayman, 31, when asked about her memory of the song and its significance. “[It] brings out my alter ego, dancing is my prime source of happiness and I wish to be a belly dancer in some other universe, this song wakes her [alter ego] up.”

There is no solid explanation as to why this particular song inspires freedom or a sense of liberation. It is almost innate, instinctive, to move along to the song’s accordion riffs, whether one is truly capable of belly dancing or not. Those who do not dance, sing along, belting the lyrics “ta’ala nor’os balady” (‘let’s belly dance’).

Nonetheless, it would be remiss not to dive into the narratives behind this Middle Eastern classic. Egyptian Streets spoke with a number of women who shared their bond with Shik Shak Shok,and its significance during their adolescence.

Written by one of Egypt’s most accomplished master composers, Hassan Abu El Seoud, Shik Shak Shok was first released in 1974 as part of his first vinyl LP titled ‘This is Orient’, under the Lebanese record label Sout El Nogoum (Voice of Stars).

As the song grew more in popularity, it was featured heavily in nightclubs and late night casinos. Naturally, the song ended up on the silver screen twice in with Egyptian belly dancer and actress Soheir Zaki immortalizing the song — or at least the original version.

As the 1990’s rolled in, a more commercially-friendly arrangement arose under M. Sound, a subsidiary of Nasr Mahrous’ Free Music Art Production. The faster, modernized arrangement, which featured less synthesizer and more tambourine, came out as part of the Saher El Accordeon (‘The Accordion Magician’ or ‘The Magician of the Accordion’, 1994) cassette tape, though it was not the only element altered in the song. The iconic lyric “matseeb ya habibi el rap w’el rock” (‘leave rap and rock music, my darling,) was introduced, changing slightly from 1974’s version.

Nowadays, few recall the original version. On streaming services, only Free Music’s remix exists; erased is the old version from existence save for the memory of the few who experienced it firsthand.

Generally, it would seem the new Shik Shak Shok was destined for longevity. The oriental song is considered a staple of all occasions, marking the celebrations and merriment.

For many people like Twitter user @IvanDeJarjayes, Shik Shak Shok automatically translates to a wedding. It continues to be a part of several couples’ fond memories, and not just those living in Egypt. Take Ramy Tadros, who recently got married in Oregon, in the United States, and played it during his wedding. He perfectly describes the track as “a song that survived decades and thousands of miles.”

Teenage Discovery: Away from the Male Gaze and into Self-Expression

While Egyptian weddings are impossible without Shik Shak Shok’s rich, dynamic rearrangement, henna parties are even more so. Starting the 1990s, Egyptian women’s henna parties were monopolized by the staple tune.

Henna parties remain the most common occasion for playing Shik Shak Shok, El Seoud’s popular song. Women and girls of all ages move to the unmistakable beats and percussion sounds, undeterred by who might be watching or by intrusive, unasked for sexualization from strangers.

Rana Mohamed, 24, finds both confidence, acceptance, and femininity through the song. “[…] [A]s a shy kid, I loved to dance, but would usually not be brave enough,” Mohamed states. “When [Shik Shak Shok] came on, I just couldn’t help it. It was very catchy. […] Watching those brides and family members dance to it made me want to get better at belly dancing.”

Struggling with self-consciousness, Mohamed elaborates that being underweight left her open to criticism. “I’ve been underweight all my life, so I was frequently told that I dance well, I just don’t have the body for it,” she says. “ […] I hated any form of exercise but I wanted to look and feel stronger and more womanly, for the lack of a better word. Just tying a scarf around my hips and swaying to Shik Shak Shok made me feel very womanly. As an adult now, even though my body hasn’t changed much, I did grow to appreciate it [Shik Shak Shok] more.”

Girls-only house gatherings are also major events for Egyptian teenagers that feature Shik Shak Shok. Hana Hassan, 21, recalls the song “always being there” whenever she and her cousins, whose ages vary along a spectrum of 12 years, came together.

“One time, at our grandma’s house, we had a talent show of sorts where she would rate our dancing, and Shik Shak Shok was the main event,” Hassan says. “That’s the framing the song has in my head. I was obviously aware of the conversations floating around then about whether belly-dancing was sexual or not. For us, the song was separated from all that. It wasn’t sexual or shameful. It was just us having fun as kids as we discovered belly dancing. Since it was the only song we knew and loved from this genre, it became forever associated with those days.”

Those, like Merhan Mohammed, 22, who says she cannot dance at all, still feel an affinity for the song. From her viewpoint, Shik Shak Shok is the sacred sound which “fires up” any dance party.

“The only move I’ve got is just shaking my shoulders and that’s it. [But Shik Shak Shok] just really makes me want to grab sagat (Zills or zils, also called finger cymbals) and a mandeel (scarf) to tie around my waist. It makes me feel like my femininity is okay and is very empowering. Women dancing for themselves is just so wonderful. For me, I think it’s the only time when women aren’t shamed for what they are.”

Farah Mohamed, 23, supports the previously-stated sentiments, and adds that as the communities of women of all shapes and body types around her took to embracing Shik Shak Shok particularly in their female-only gatherings, they also began to indirectly perceive it as different from other songs, a source of power.

“This song celebrates the idea that dancing is made for women, unlike other famous oriental songs which might be targeted to men and the male gaze. [To our community], it was made specifically for us, with belly dancing in mind. Plus, it’s socially accepted among moms and aunties because it’s not considered vulgar,” she explains.

“I love how body-positive it is, because it celebrates femininity and encourages women everywhere to move their bodies [regardless of what they look like]. It’s also very sensual, again without catering to men or taking off your clothes because it exists largely only in women’s spaces,” she resumes. “If you want to express yourself, prove your femininity, whether for yourself or others in a conservative society like ours which usually rejects it, this is the song to go to. It’s very empowering and it doesn’t make you feel inner shame.”

It is not difficult to pinpoint the commonality in everyone’s experience: Shik Shak Shok is a women’s song for self-expression. Not only does it afford agency to the woman singing or dancing, but it urges her lover to dance for her rather than the other way around; this peculiar form of role-reversal only reinforces women’s freedoms.

Oriental dance tracks are countless, too numerous to begin listing. However, if one were to name the most memorable and enduring, Egyptian women and girls everywhere would cite none other than Shik Shak Shok as their first choice.

Places of Power: Looking at Egypt’s Presidential Palaces
House of Horrors? The Bone-Chilling Past of Egypt’s Baron Palace

House of Horrors? The Bone-Chilling Past of Egypt’s Baron Palace
Places of Power: Looking at Egypt’s Presidential Palaces