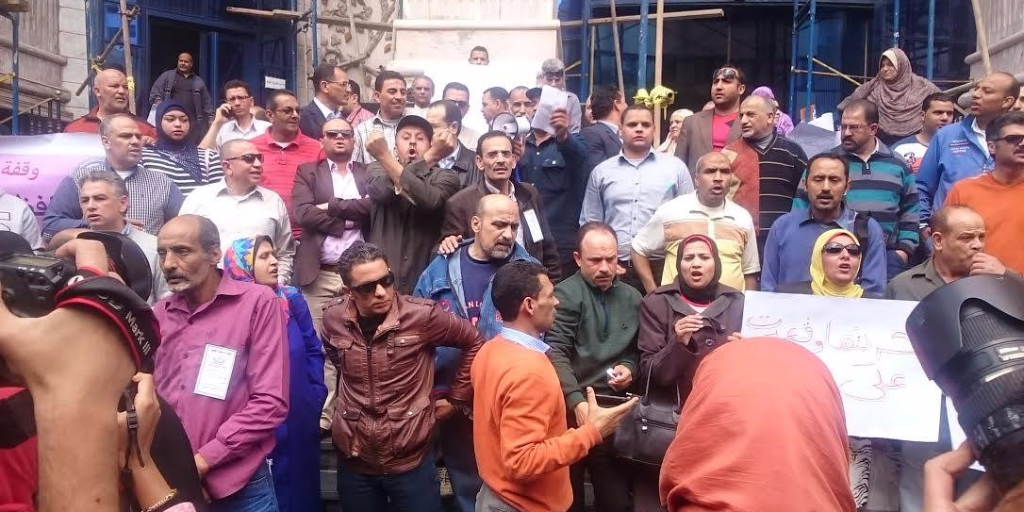 Dozens of government employees gathered in front of the press syndicate on Sunday in objection to an attempt to repass the civil service bill, amid tight security.

Demonstrators called on the Cabinet to resign. Instead of the controversial civil service bill, they called for the preparation of a uniform law for all state employees without exception to be put forward for public discussion.

A draft of the civil service law was ratified by President Abdel Fattah al-Sisi last year, enraging broad sectors of state employees and prompting some to protest, reigniting labour action in the country after a months-long pause.

The bill did not pass in January when a majority in the House of Representatives voted against it.

The demonstrators held banners today criticizing the government for attempting to repass a bill which was rejected by the House.

After the bill was rejected, the Egyptian Cabinet, headed by Prime Minister Sherif Ismail, said it will present an amended version to the legislature.

If approved, the law would usher wide scale changes in the pattern of governmental work, creating a framework of oversight mechanisms on administrative state bodies.

But not all workers are free to demonstrate against the bill. Head of the tax authority syndicate Fatma Fouad told Aswat Masriya that there are severe restrictions imposed on tax employees to prevent them from protesting.

She said, “We are not against the state or the regime, we are calling for our right to a dignified living.”

One of the demonstrators, Mohamed al-Saeed said, “The government deliberately provokes employees,” adding that it does not take articles in the constitution into consideration.

Ismail’s Cabinet is set to present its program to the House of Representatives on March 27, as stipulated in the constitution.

Article 146 of the constitution states that if the government does not win the confidence of the majority of House members within 30 days, the president appoints a new prime minister from the largest coalition or party in the House. The new prime minister must also present a program to the House and win its confidence within 30 days. If it fails to do so, the House is dissolved and new elections are held.

According to the Cabinet, the program aims to tackle “challenges” faced by the state including national security issues and economic issues such as population growth, unemployment, the economic slowdown and the budget deficit.

COVID-19 Deaths Edge Closer to 5,000 in Egypt: Ministry of Health