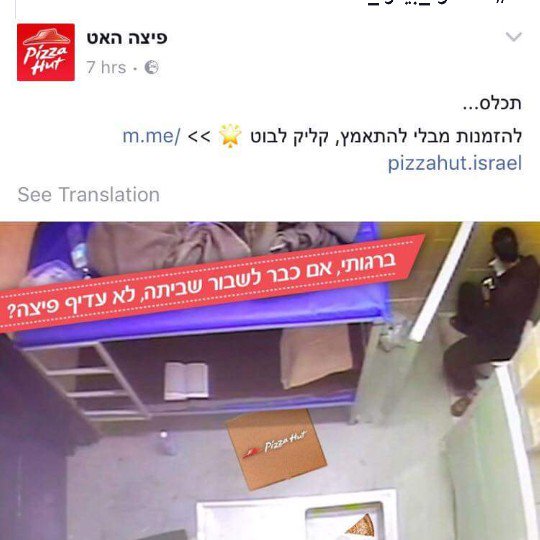 The international franchise of “Pizza Hut” has apologized for mocking the leader of the hunger strike, held by Palestinian detainees in Israeli prisons.

Several activists have started hashtags and campaigns to boycott Pizza Hut. However, the official account of Pizza Hut in Arabic has released an apology, saying that it is not their fault and they instantly terminated their contract with the advertising company responsible for writing their social media posts.

The franchise had included in the condemned Facebook post a screenshot taken from a footage released by the Israeli prison, claiming that the leader of the strike Marwan Barghouthi was eating secretly in the cell.

The caption that was written in Hebrew said, “Barghouti, if you are no longer on a hunger strike, why not eat pizza instead?”.

Palestinians had started to call for boycotts of Pizza Hut before several activists from other Arab countries joined the boycott calls. Barghouti has been leading about 1,500 prisoners in an open-ended hunger strike protesting their arbitrary detention in the Israeli prisons, medical neglect, and rare family visits.

In April, activists from an Israeli right-wing movement organised a barbecue outside a prison in the west bank where the Palestinians on hunger strike were held. The organisers said back then that the barbecue was only organised to provoke the detainees with the smell.

GERD Filling Plan Trudges On Despite Egyptian Concern Amidst COVID-19