This Australian Visited 100 Countries, but Nothing Compares to Egypt

Egyptian Streets
This Australian Visited 100 Countries, but Nothing Compares to Egypt 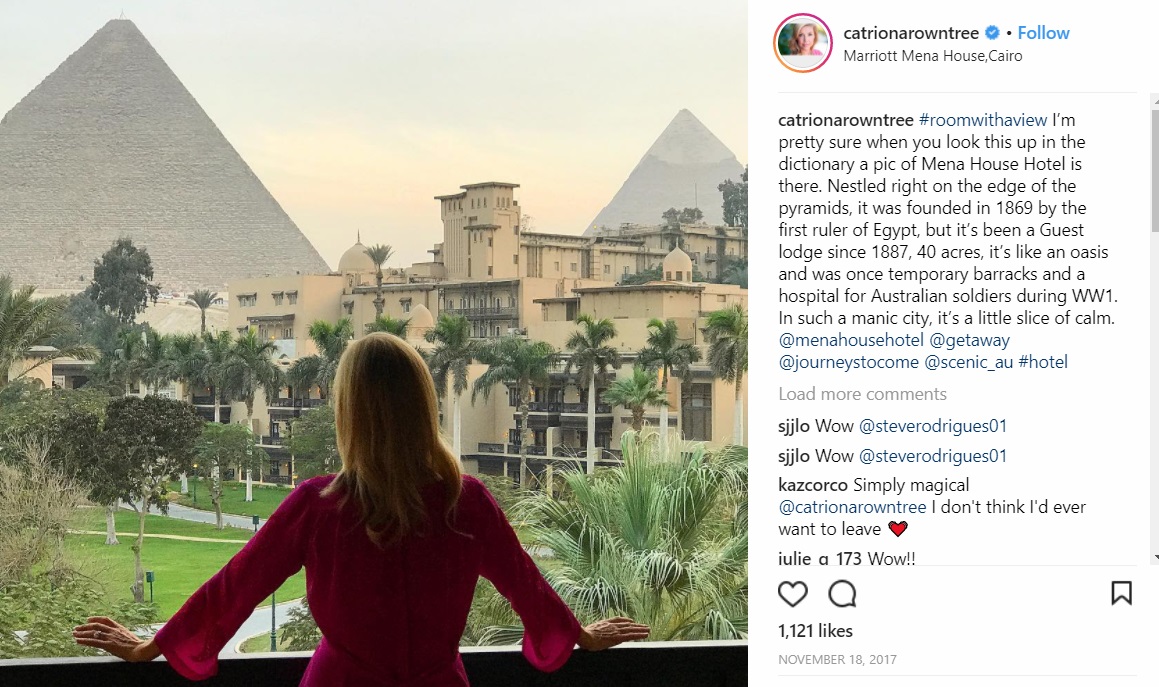 Catriona Rowntree, an Australian television presenter on the Nine Network, has traveled to 100 countries since she was 26. After 20 years of travelling, Rowntree believes no place can compare to Egypt.

“I’ve never been somewhere, where Aussies approach me with tears in their eyes. Not only are they achieving life long dreams, but they dearly wanted me to spread the word about how magnificent and safe it is,” said Rowntree about Egypt in an interview with Escape.

Rowntree spoke to Escape about her filming of episodes for Channel 9’s Getaway program on Egypt and Jordan.

“We were the first non-news TV crew to film there in years. Locals couldn’t believe we wanted to share positive, happy stories,” said Rowntree in the interview.

Rowntree told Escape that there are many misconceptions that exist about Egypt and Jordan, many of which revolve around safety.

“It’s unsafe; it’s entirely Muslim; you have to obsess about covering up. All totally false. You’d have more chance of kicking the bucket driving down an Aussie highway; it’s multifaith, so to speak, as in it has a huge Christian and no doubt more religions openly practised and I was laughed at when I asked if I needed to wear a hijab,” explained Rowntree.

“Women are free to wear what they like. You’ll find in rural communities, the culture there seems to dictate whether women should wear scarfs or not. But I just tried to dress with respect and never once had a problem.”

Rowntree’s love affair with Egypt first started when she was in school.

“At 15, I was blessed with a wonderful Ancient History teacher, Mr Wannen, the sort of teacher who could make the history in the books come alive and one day he pitched a crazy idea to us, “what if we were able to actually GO to these places!”,” said Rowntree.

“So after somehow convincing our parents and Headmaster to let us go, we set off on a school excursion like no other, visiting the ancient sites across both Egypt and Greece with family and friends.”

In 1996, Rowntree became a reporter on Getaway, a popular travel  series which airs on Australia’s Nine Network.

Since then, Rowntree has traveled to around 100 countries and encountered countless experiences. Despite her wide travels, her passion for Egypt which developed during her time at school continued to remain strong despite travelling the world.

From eating delicious and aromatic food with locals and visiting ancient Egyptian sites to staying at the Cataract Hotel in Aswan where Agatha Christie wrote the critically-acclaimed Death on the Nile, Rowntree believes there is plenty to discover about Egypt – and equally as many experiences to make you fall in love with the country.

The features on Egypt and Jordan are set to air on 5 and 12 May on Channel Nine. Read Escape’s full interview with Rowntree here.