Women Tell Distressing Stories of Their Experiences on Egypt’s Metro

Have you ever wondered how it’s like for women to ride the underground system in Cairo? Established in 2007, women have three carriages dedicated to them per entire metro train. Two of of the carriages accommodate women until 9: 00 P.M (recognizable through the green band of writing above the doors) and one that is solely for women at all times (strip band in pink).

It is an unfortunate reality that the very same carriage that were meant to protect women, end up causing them the biggest problems.  Women in Egypt also have difficulty approaching police officers to ask for help as the latter can be the cause of their troubles in the first place. In one instance, two years ago, a woman was even slapped by a police man for refusing men to get on the women-only carriages.

It is thus not uncommon for women to experience problems during their rides, whether in the women only or mixed carriages. Egyptian Streets decided to ask women about their most negative experiences riding the metro. Here are there stories.

”Once, this odd man entered the ladies’ carriage. He pretended to have an amputated hand and he was selling Quran books. Bear in mind that I saw the same man before and his hand was perfectly fine. Anyway, the carriage was crowded as usual and he was walking around touching women and people were being quiet about it until one woman yelled at him. He pushed her but she held on to him, so he made her fall to the floor. She started shrieking and the women started to crowd around them. The metro was near the station, so I got off and ran to the control cabinet to tell the driver that there was a man hitting women in the women’s carriage. I was yelling, and he was just staring at me, not reacting at all. The men from the other carriages went in the carriage and removed the man. We got in again and the metro went on its way.” Nada Achraf

”My sister once saw this guy hitting and shouting at his wife in the metro and so she intervened, so he could back off. I think she shouted at him at some point. The saddest and most ironic part is that the people did intervene just to tell her it’s not her business and that ‘what goes between him and his wife’ shouldn’t concern her. […] The hypocrisy was too much for me to handle” Nada Mostafa

”I was with a guy and a girl so we had to ride the mixed car not noticing that we had so many people behind us waiting for the ride. When we got in the metro car, many people entered much more than the car takes. The girl I had with me and I were squeezed between so many men and we were a little separated from the guy we had with us. It was so crowded so, of course, we were touched. We fought back and personally I yelled at the guy who was harassing me and even hit him, but he wouldn’t stop (he didn’t even defend himself while I was hitting him, the bastard) and even though the whole car could see me yell no one intervened. They only yelled at me for riding a mixed car. Sort of like, what made you ride this cart to begin with? A guy offered to let us stand near him away from the harassers but at this point we had lost our trust in the people around us, so we were scared. A fight was going to break out between them and the boy we were with. I don’t know why people were fighting with him rather than with the guys who are harassing us. It took me a long while to be able to take the metro again.” Nouran Osama

”I was dropping my mom to the train to Alex, and there was this guy following us. First time, he walked past me, facing me, leaning in and said ‘’eih ya 3assal [sweet thing] and I just scew-faced him and carried on walking. Then he turned around as my back was to him and grabbed my bum, so I turned around instinctively and slapped him. The whole station came to see what was happening from the sound of the slap and a few guys tried to catch him when they found what he did. Welcome to Egypt,” Mariam Serour

”I was living in Maadi for three years. For about a year I was working in Mohandessin.  I preferred to stay in the mixed carriage because women constantly touch and push. I have never been groped but I have had verbal confrontation. Twice, men have followed me from the metro. Once, in the afternoon, I was in the mixed cars. My mom called me, so I was speaking in English, I had a bunch of overnight bags and my laptop.  A pretty big dude followed me from the metro. I knew immediately because you have sense of who is around you. I chose to go through the most crowded street. I confronted him a couple of blocks down. I screamed at him and insulted him. A guy stepped in and spoke in my defense. When I went into my neighborhood, I saw him walking around. I called my bawab to see and make sure that he was leaving. […] When someone stares at me in the metro, I start talking shit to them. I pushed a guy in Tahrir once. I had come from Mohandessein and was descending the stairs to get on the train going to Maadi. I turned on the corner to go into the open area. As I did that, a man standing with his back against the wall leaned in and said something on my neck, on my chest. I’m sure he said something disgusting, I turned around to confront him about what he said. It was a quick exchange and I pushed him against the wall. I don’t remember what he said but he was shocked. He was a coward out he started shouting at me, so I started screaming at him. He called me crazy.” Carly Grijalva

”It was after 9 P.M. and the metro had just arrived. I took the one with ‘ladies only’ with much emphasis on ‘only’ when I found a sitting in there. I told him to get off, there’s plenty of room for your kind. He refused. So, in the next stop, I stepped in front of the door so it wouldn’t close and called for the cop, so the guy ran to the next compartment, but he kept an eye on me. When I hit my destination and went off, he followed me, and I started running. He ran as well but thankfully a woman who was a witness of the incident yelled at him and told him to leave me alone and that he had no right to chase me. Meanwhile, I had reached the top of the stairs and told the cop stand there…He told me it’s okay, just go home. ” Yuri Hossam 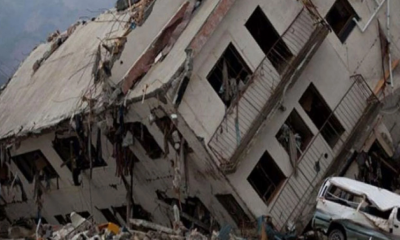 Calamity in Cairo: The Earthquake That Shook Egypt 30 Years Ago