What Are the US Midterm Elections’ Impact on the Middle East?

Omar Ibrahim
What Are the US Midterm Elections’ Impact on the Middle East?

On Tuesday, November 6th, the results were declared for the US midterm elections. Democrats won control of the House of Representatives, and the Republicans held a tight grip to the Senate and expanded their majority.

It would not be wrong to assume that, in some manner or another, many countries would be indirectly affected by the outcome of the decision in the medium and long run

What are the US Midterm Elections?

According to Vox news “Since the Democrats have won the House, Republicans will no longer be able to pass legislation with GOP votes alone — instead, to get any bills through Congress, Trump will have to spar with Democrats. The new Democratic majority will also have subpoena power, which will help them investigate the Trump administration far more aggressively.”

But since the Senate is the Republicans hands, Democrats do not have the power to block the American president’s Supreme Court, Cabinet, or other nominees for the next two years.

The midterm elections might shuffle around some US policies in the Middle East after the Democrats winning the House, policies towards Iran, Saudi Arabia, Yemen, Palestine, and Egypt.

Trump withdrew from the Iranian Nuclear deal (The Joint Comprehensive Plan of Action) back in May, 2018. It left many Democrats in scorn, primarily for believing that Trump has abolished Obama’s diplomatic achievement and rendered the US national Security and the Middle East in huge risk.

Representative Nancy Pelosi of California, the House Democratic leader said back then that “The Joint Comprehensive Plan of Action is a great diplomatic achievement. Experts and our allies all agree that this landmark agreement has been successful in preventing Iran from obtaining a nuclear weapon, and even senior Trump Administration officials have confirmed that Iran has remained in compliance with the agreement. Yet, the president has chosen to utterly ignore that reality.”

Although nothing can be done to reinstate the Iranian deal, it can be expected that the Democrats will follow up closely Trump’s action’s and current policies towards Iran.

Saudi Arabia’s killing of journalist Jamal Khashoggi effects still hasn’t waived off, and it has put the US close alliance to Saudi Arabia into test, especially that the Turks are working hard to indict Saudi Arabia’s highest hierarchy to the murder including the Crown Prince Mohamed Bin Salman (MBS), which Saudi Arabia will not allow by any means.

However, Politico has captured it perfectly when assuming the reasons behind Turkey’s non-resilient position, it stated that “Erdoğan is perfectly placed to extract concessions from the Saudis. And given that the Trump administration has built a foreign policy strategy that hinges on cooperation with MBS, and that Trump’s behavior suggests he is invested in protecting the kingdom, Erdoğan’s leverage over the Saudis extends into leverage over the United States.”

The Democrats are not happy with the situation, they want a more hardline approach to Saudi Arabia, Smith and Engel said in a statement last month with top Intelligence Committee Democrat Adam Schiff, D-Calif. “As congressional leaders, we must show that the United States will stand up against injustices and human rights violations in any country, including our partner, we wish the administration would do the same.”

Yemen has suffered immensely during these past few years, and still suffers till this day. the UN has warned that Yemen faces a growing risk of cholera and famine. According to UN figures more than 22 million people need food assistance, including 8.4 million who are on the verge of severe hunger. UN aid operations chief John Ging said living conditions in Yemen are “catastrophic” following three years of conflict.

Yemen’s fortunes may be tied to Saudi Arabia and the Khashoggi case, some countries are taking a chance of Saudi Arabia’s vulnerability by addressing the war in Yemen. According to the CNN “There are plenty of members of Congress in the US who don’t agree with Trump’s lax response to the Khashoggi killing. A bipartisan group of Senators has introduced draft legislation to impose tougher sanctions on Saudi Arabia that target arms sales to the kingdom and bans the US practice of refueling of Saudi planes in the Yemen war.”

Democrats are opposed to the war in Yemen, by winning the house, they may have an effect in changing in the Yemeni war, or at least push for a cease fire.

Resolving the Palestinian issue is the key to the solution to every problem in the Middle East. Democrats generally feel that Trump hasn’t struck the right balance in dealing with the Palestinian Israeli problem, Democrats feel Trump is more in favor of Israel. So, the Democrats by winning the house may try to impose a balanced foreign policy to the problem, however it seems unlikely due to the powerful Israeli lobbying in the Congress.

The Egyptian president Abdel Fattah El Sisi was rooting for Trump in the presidential elections, he was rooting for a Republican win, it seems that under the last Democratic party president Obama, Egypt’s relations with the US weren’t at the desirable level.

It is still being seen by the Egyptian government that the overthrow of Mubarak by protests in 2011 was due to US and the Muslim Brotherhood meddling in the country, Egyptian officials still call the 2011 revolution the decline of the “National State”, that change must not come suddenly or else it will destroy the state. 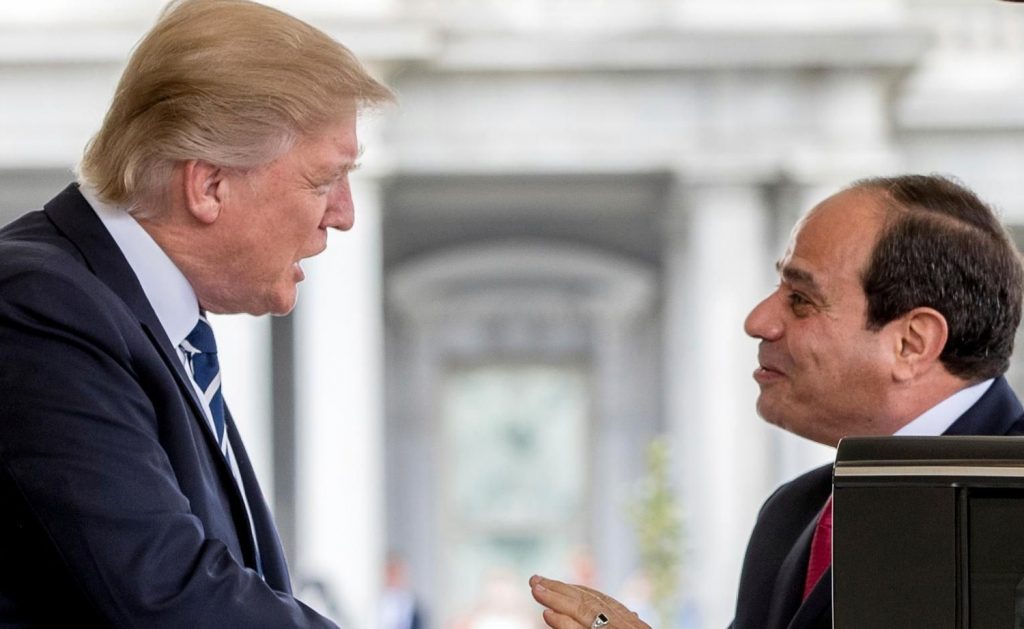 Democrats may raise up the humanitarian issue in Egypt, since the government has pulled its grip against the political opposition in Egypt.

Even though the Democrats have won the House, Trump will still enjoy significant power over foreign policy.

According to Politico, “He can still quit treaties, negotiate bilateral agreements and make significant changes to U.S. priorities abroad if he so chooses. Congress can’t force the president and his aides to fill the vacant diplomatic posts that dot the globe, for example. And it can’t constrain Trump’s rhetoric about foreign countries, the United Nations or NATO.”

“When it comes to foreign policy, the president of the United States still has a lot of discretion, he has a lot of powers in his hands, Congress does not have much leverage over the president when to comes to foreign policy decisions” said Karim Abdoun, MA in International Relations and Assistant lecturer in the British University in Egypt (BUE).

The only danger to a shift in foreign policy would come if Trump is impeached, “The big key question is whether the Mueller investigation ends up in indicting Trump, or suggests that his campaign had illegal dealings with Russia” added Abdoun, there may be grounds for impeachment, but let’s not get carried away with the notion, let’s not forget that US Attorney General Jeff Sessions has been fired earlier by Trump, presumably over his refusal to oversee the investigation into alleged Russian meddling in favour of Mr Trump’s election in 2016.

The American president alone has the ultimate say on foreign, even though Democrats won the House, but we can expect hearings here and there over some Executive decisions, even those related to foreign policy, but ultimately not to any effect.