Egyptian blogger Amira Shohdi launched a new, ongoing initiative “I Can’t Do It All” in October 2018. The initiative is intended to raise awareness on how society’s expectations are adding a lot of pressure on women.

It especially aims to tackle the notion of expecting women to be flexible in dealing with their everyday duties and taking more responsibilities than they care bear, un-assisted, as is the ‘natural’ role of women instilled in Middle Eastern upbringing.

Shohdi realized that this misconception of the role of women has caused difficulties in raising healthy girls and young women with healthy mindsets. It has often stunted self-care as well as self-love and halted the mindset of thinking of her wants as there is constant pressure to care, love and add value to her community.

This perpetual sense of self-sacrifice has further perpetuated the idea that a woman is expected to juggle her career, marriage, and children without any help and without resorting to private, self-indulging activities.

We speak to Shohdi about her initiative and its goals. 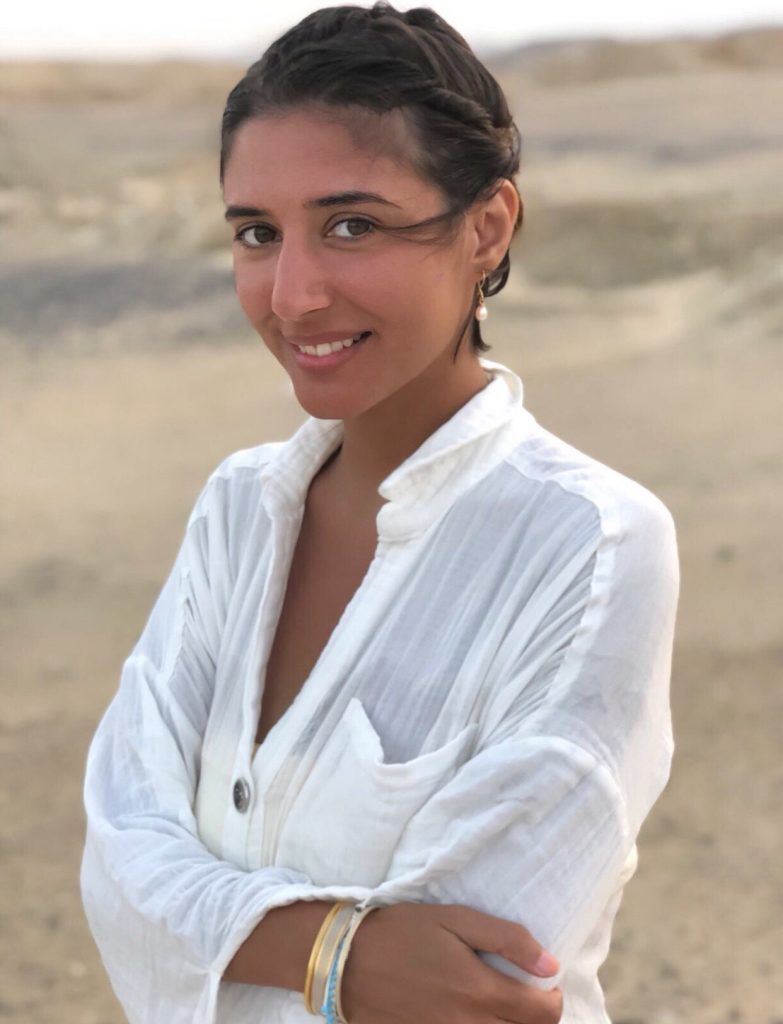 As a Middle Eastern woman raised in New Zealand, what inspired you to start the “I Can’t Do It All” initiative?

I’ve been raised in at least five different parts of the world, growing up, and as much as I’ve learned about how some cultures and religions can be so different and diverse, I’ve also learned that they can have so much in common. I’ve realized no matter how many women I have met from all the unique parts of the world, we all tend to have quite a lot in common and dealing with unrealistic expectations is one of the common areas.

What inspired me to start the “I Can’t Do It All” movement was a conversation I was having with some friends, who are from different parts of the world, yet all facing similar issues in one way or another. That’s where the idea was triggered.

It has become so hard for us to choose what we want because our minds are consumed with what we’ve been programmed to want and think since we were babies. Your job? Or your marriage? Your career or a child? How many times have women had to make this decision and deal with these ultimatums? You do what makes you healthy, not just happy but healthy mentally, emotionally and physically. If you can’t love yourself you won’t be able to love those around you.

The reason this initiative is so close to my heart, is it is a loud and blunt message to myself and to the rest of the world that we, as women and even the men who feel this same pressure, will no longer and can no longer succumb to these unrealistic obsessive expectations that society, social media, film and cultural have put us through all these years.

What challenges did you face before and after launching “I Can’t Do It All”?

Before launching the movement, I did consider that it might not succeed, that no one will open up and I’ll feel like I’m completely alone in what I was feeling. Now this is because as you may know, in the Middle East, we like to pretend like everything is always fine, especially in the public eye, we have this belief that we shouldn’t open up or people will know we have issues, god forbid. And I was also a little concerned about how people might judge my own personal life, and then I said to myself “I don’t care!”. 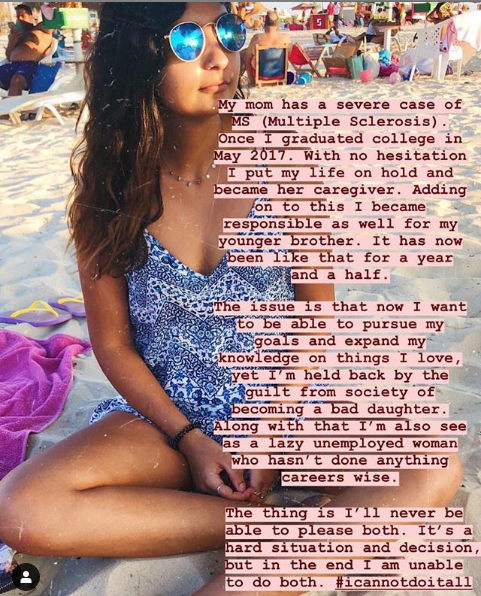 I don’t care what people think of me or my life, I will never let that ever get in the way of me expressing my thoughts, fears, and experiences, even if I end up being the only one saying these things, even if other women refuse to support me or even if they try to steal the idea and make it their own. Once I initiated the movement, I got great feedback from both women and men. But the challenge I face now is getting women to open up honestly about their issues even if it is anonymous. There’s not enough support in the community, there are too much business exchange benefits and not enough selfless support. But I will continue to try to change things as much as I can.

What were your expectations towards “I Can’t Do It All”? And the initiative achievements so far?

My expectations were not that high as I mentioned before because I wasn’t launching this in Arabic and I am based in the Middle East after all, but my mother tongue is English so I can’t help it. I also knew that since this wasn’t an entertaining, eye-candy page for fashion addicts and foodies, travel bloggers etc., that it would be difficult to get the kind of recognition that this movement deserves. However, I was wrong. I was overwhelmed by the support I got from some people and especially social media, newspapers, magazines, and TV. The page continues to grow slowly but surely.

@alqaheraalyoumalfa @bothainatawakol Tawakol @nada_hussam Thank you for having me in your show today. It was an honor and a privilege to get to talk to you about my movement “I Can’t do it all” and to discuss other topics including my Nos Masry series on YouTube and my love for fashion. I’ll share the full episode with you all soon!! Follow @Icannotdoitall ! Thank you everyone for the support! Al Hamd le Allah! . . . #egypt #cairo #instadaily #instagood #tv #interview #icantdoitall #feminism #empower #women #love #fashion #nosmasry

What is the most inspiring/motivational story that you have received from women/men who supports “I Can’t Do It All”?

I have received several, to be honest, but the one that stands out is a woman who wanted to commit suicide a few months back due to a severe case of depression which she does not wish to see a doctor for. What was frustrating is that when she approached her mom to tell her she has been dealing with depression, her mother told her “Honey, you have a husband that loves you, and a job you’re good at and a family that loves you, what’s there to be upset about?”.

So she felt a little ashamed to be wanting to go to a shrink, and she thought she should be strong enough to heal herself. We spoke to each other, I told her I had my fair share of depression and that it took many years and many side projects to try to figure out how to control it. But I kept stressing to her that she shouldn’t feel like she needed to fix everything on her own, it was unfair to expect that, especially when it wasn’t succeeding. She later told me she told her husband that she needed to see a doctor because she wasn’t well. She’s been seeing the doctor, she’s gone back to writing short stories, she’s been telling me it’s a process and there are no shortcuts but it’s been so inspiring to see her try to get her life back for herself, because only then can she give back to her family and to everything else.

What is your advice to every woman/man in our society, especially in Middle East society?

My advice is, to be honest with yourself about who you are. Be good to other women, and be very protective of your own self, don’t let people hurt you and abuse you and then make it seem like it’s your fault. I always talk about kindness, but I will stress that kindness is also a kindness to yourself. If you’re kind to others and they abuse it, you must be kind to yourself by letting go of the things and of the people who refuse to let you live and can’t love you for who you are. 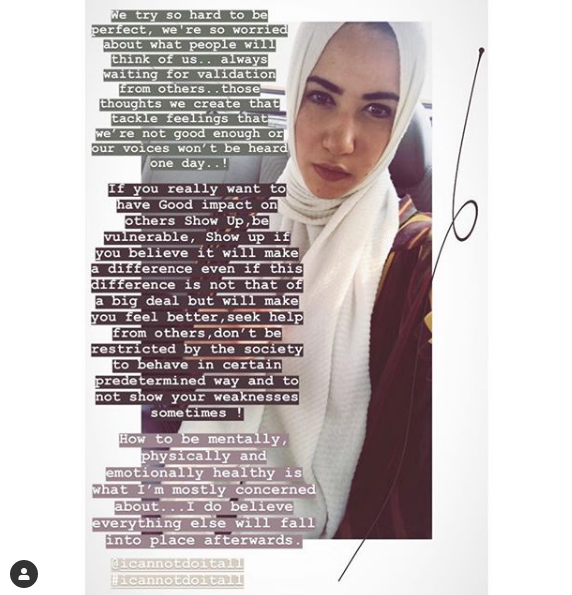 I also very strongly advise young women and even older women to not rely on a relationship for happiness; finding a partner is not life’s main goal or mission but finding yourself is. It that takes so much time because just when you think you’ve figured yourself out, you grow a little, experience something and then bam, you’ve changed a little once again. So be patient, don’t compare yourself to anyone else. Just focus on yourself, you’re not anyone else, and they’re not you. The most beautiful thing one can have is originality. To be one’s self without worrying about being someone else, how liberating!

From your own point of view, what should the society do to raise a healthy generation that understands mental health, equal rights and respect for both women and men without any kind of pressure, disrespect, guilt, anxiety or any sort of toxicity?

Religious, sexual, racial and social hierarchy discrimination is something that people have to deal with all over the world, it’s an issue facing every society and is embedded in all of our cultures in some way or another. Here’s the thing though: I believe it all starts at how the home environment is.

I believe there’s a lot to be done, but the first thing is to read more or even watch documentaries more to gain information and expand knowledge. The second thing would be, equality in the way we raise men and women, starting of course in their own homes by their families and friends, in their schools and their teaching material. I wish they’d give kindness and self-awareness classes that teach kids to be good to one another, to not judge each other based on materialistic things and to accept each other for who they are.

Tag a female entrepreneur here and let’s talk about our own businesses and dreams! I’ll repost their pages for support! Show them love! Let’s support each other freely. Tag the women you know and love who are either new in the business online or offline or those who are already up and running and doing great! I’ll give them all a shout out! . . . #women #business #entrepreneurship #entrepreneur #empowerment #love #instagood #instadaily #female #thefutureisfemale

I also do think teaching self-love would instantly make this world a better place, it would make homes less cold, detach people from social media a little more because we might not want to escape reality as often and it would definitely help us to love each other better.

I don’t think we should be shoving words like “because society says” or “people will talk if you do this or do that”, instead we should help our kids worry about the consequences of their action on their own selves other than what others will perceive. That way you’re not teaching them to act one way in public and another in private but you’re teaching them to care for themselves the best they can whether or not someone’s watching.