Review: Where Epics Fail – Meditations to Live By

Mirna Abdulaal
Review: Where Epics Fail – Meditations to Live By 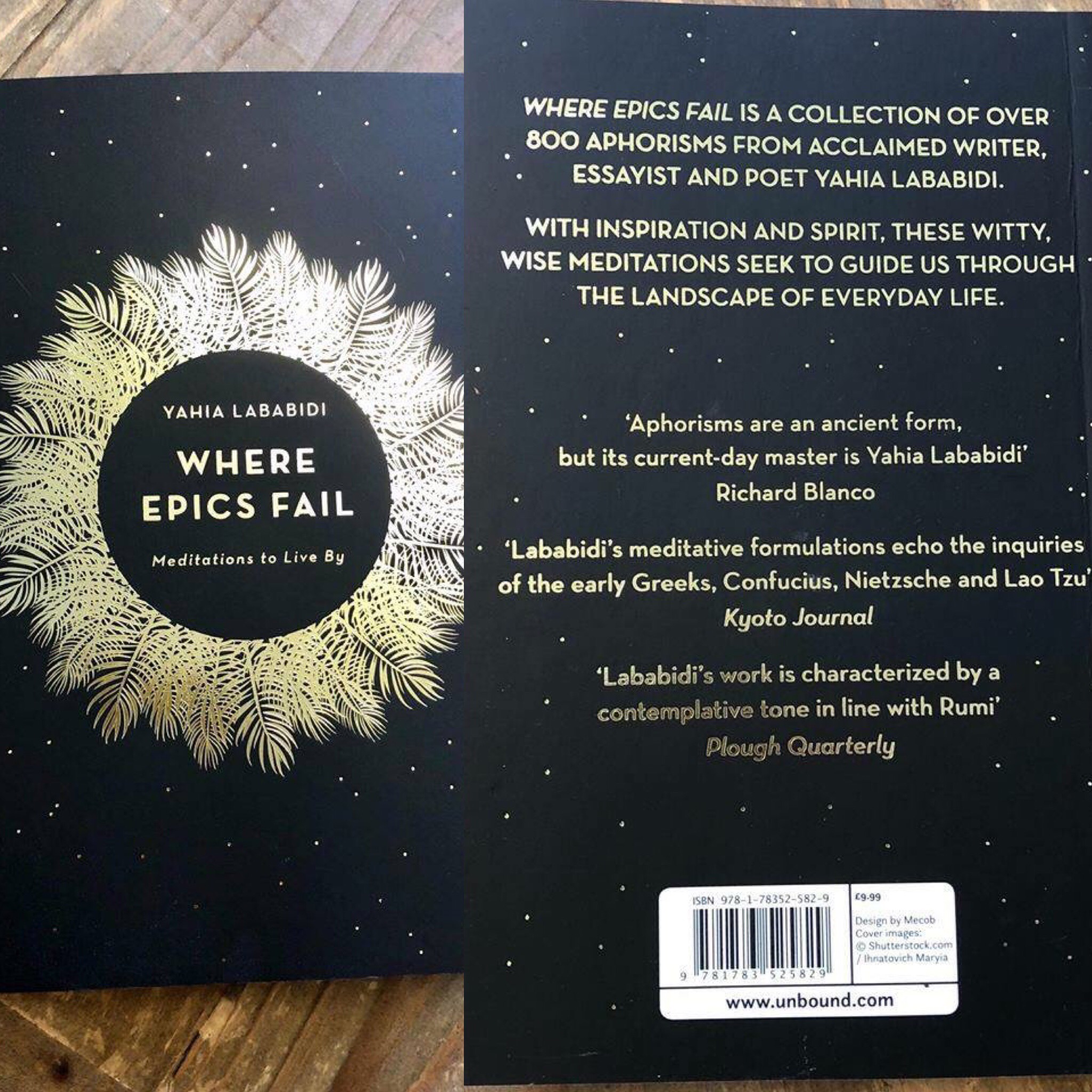 At times when the weight of our spirit becomes heavy, there comes the need for some kind of power or force to bring a little delicacy and lightness to it. Some may look to music, dance, prayer or any other activity that transcends the physical world, but one can also look to ‘Where Epics Fail’ by Yahia Lababidi, which I like to describe it as a ‘ray of light’ in our current time.

For centuries, light has been the most powerful symbol of spirituality or the divine. In most religions, it is strongly connected to our ability to see or becoming spiritually awakened. It does not necessarily mean that the sun’s light is the divine, or that it will help you reach it, but it is certainly a metaphor for vision, power and illumination.

Previously featured on The Guardian and Al Jazeera for his work, Yahia Lababidi, an Egyptian-American poet and aphorist, captures that light perfectly in his latest book. Just like a ray of light, it cleanses your spirit, awakens your mind, and guides you. The short yet powerful aphorisms leave you to both question, discover, meditate and love all at the same time.

When I first read ‘The Prophet’ by Kahlil Gibran, I recognized a voice that is quite different and distinct from his other works like ‘Broken Wings’. In the latter, there was more emotion and a sense of fragility and humanness to the character. Yet in ‘The Prophet’, this weak human voice is replaced with this anonymous and mysterious one that allows the words to take a much higher level than the character.

Since then, I concluded that there are certain kinds of works that require this special skill in echoing this truly hidden and unknown voice. In other words, it demands a person that has reached a certain level of consciousness that transcends their own human voice.

Lababidi mastered this skill quite beautifully in his work. The wisdoms he shares leave you with a more balanced and delicate spirit, as though you’ve let go of the past and became reborn.

The value of forgiveness swims deeply in this book, which I believe is one of the main elements that gives it a sense of delicacy. One of my favorite one is: if we can try to see the (oftentimes, hurt) child in others, we are more likely to forgive them.

At the end of the day, it is more about how we treat and connect with others that really helps to elevate our souls, as another one says: the prayers most likely to be answered are selfless ones that we make for others, and If we gaze deeply into our own wound, we also see the wounds of others.

There are also other exquisite lines on love, religion, and self development, which he cleverly connects together to make the true message of the book more united and harmonious.

To truly appreciate this kind of work, I believe that one needs to read it perpetually at different stages of life, for each line brings out bigger meanings with the experiences that one intakes. There is always so much noise and distractions in our modern times that one can easily look past these few lines on a page, yet it is only when everything becomes much quieter with time that we truly value their simplicity.

As he says: if we listen, the air is heavy with poems.

Lababidi’s true magic lies in his ability to travel through the ray of light on his own and come out with the magical end result for the audience to enjoy.