Two separate bus crashes in Egypt on Saturday resulted in the deaths of 29 people and left 31 others injured, including a number of Malaysian and Indian tourists.

On Saturday morning, a bus crashed into a truck on a highway near the city of Port Said, killing 23 people and injuring seven others. The bus had been carrying local Egyptian laborers who had been on their way home from a garment factory.

The victims of the Port Said accident were aged between 20 and 50, reports Al-Masry Al-Youm. The accident has left locals reeling, with many families left without fathers, brothers, and sons. Local police and prosecutors have vowed to swiftly investigate the cause of the accident.

Later on Saturday, six people were killed and 24 were injured when two tour buses collided with a truck while travelling on the Sokhna – Zaafarana road in the Suez Governorate. Three tourists were among those killed, including two Malaysians and an Indian, reported local media.

The tour buses had been on their way to Hurghada, a popular seaside resort town for tourists, when the accident occurred. The Suez Security Directorate announced in a statement that a task force had been formed to investigate the accident.

Road fatalities in Egypt are common and are a daily occurrence.

While the total number of road accidents has been declining since 2010, where it reached an all-time high of 24,400 accidents, fatalities remain high and critics say not enough is being done to ensure road safety and compliance with road rules. 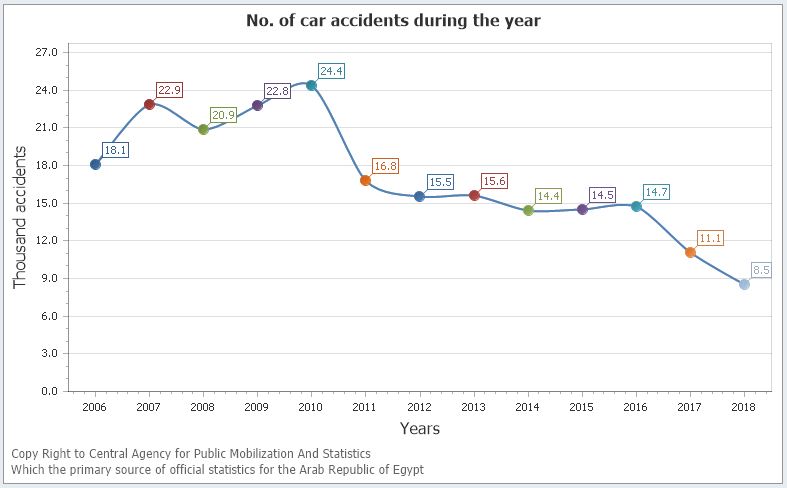 According to the most recent statistics by the country’s Central Agency for Public Mobilization and Statistics (CAPMAS), there was a recorded 8,480 road accidents compared to 11,098 in 2017.

However, the total number of those killed or injured per accident increased to approximately 1.8 per accident in 2018, compared to 1.6 in 2017 and 2016. In total, 3,087 lives were lost on Egypt’s road in 2018. More than 11,000 others were left with injuries ranging from minor injuries to severe, life-changing injuries.

The report also revealed that road accidents are the primary causes of death among Egypt’s population under the age of 25.

The report, along with Saturday’s road fatalities, show that while road infrastructure has generally improved – with the Egyptian government exerting a lot of effort to build new roads and bridges while improving some older infrastructure – not enough is being done to enforce traffic rules and compliance.

Driving under the influence of alcohol or drugs, speeding, tail-gating, lack of seat-belts, use of mobile phones, driving on the wrong side of the road, and sleep deprivation are all common causes of road accidents in Egypt.

Tour companies have also been criticized in the past for not regulating their drivers’ behaviors to ensure compliance with speed limits. In the past, various accidents involving tour buses have been blamed on speeding.

While there may be some traffic police at certain points, speed signs are generally rarely observed on Egypt’s highways and traffic police often operate at checkpoints as opposed to driving around to stop offenders.

Additionally, while the Egyptian Ministry of Interior often conducts traffic operations to arrest those driving under the influence of drugs, critics say these are rare and that traffic police need to be operating to crackdown on drug-use, along with other traffic violations, on an everyday, regular and effective basis.

Various social media campaigns have also been launched in the past decade urging Egyptian drivers to obey traffic rules. However, these campaigns are often not enough to ensure systemic change, are short-lived, and do not target all segments of Egyptian population.

It remains to be seen whether more action will be taken to ensure both awareness raising among everyday drivers and enforcement of traffic rules by authorities.