Egypt’s Musicians Syndicate head Hany Shaker issued a decree on Sunday banning all Mahraganat singers (electronic folk) from performing in any festivals, clubs, cafes or other concerts, according to an interview on Amr Adeeb’s program.

In the interview, Shaker noted that, “Mahragant musicians will no longer be working in Egypt,” and that they will “not be able to obtain license” to perform anywhere.

“This type of music is based on promiscuous and immoral lyrics, which is completely prohibited, and as such, the door is closed on it,” Shaker added, “we want real art.”

Shaker stated in the interview that it applies “to all Mahraganat singers”, including the popular duo ‘Oka Wi Ortega’, as this type of genre does “not represent Egypt.”

In an another interview with Ahmed Moussa, Hany Shaker noted that Mohamed Ramadan did not obtain license from the syndicate to perform his last concert, and that he will look into further measures to restrict these artists from performing anywhere.

The decision comes after an incident during a Valentine’s Day concert held in Cairo Stadium, where Hassan Shakoush sang the lyrics “I drink alcohol and smoke hashish”, which was considered a violation of the principles of Egyptian society.

In a press release, Egypt’s Musical Syndicate warned all nightclubs, tourist facilities, Nile boats, and cafes that any engagement with Mahraganat performers will result in “legal action.” 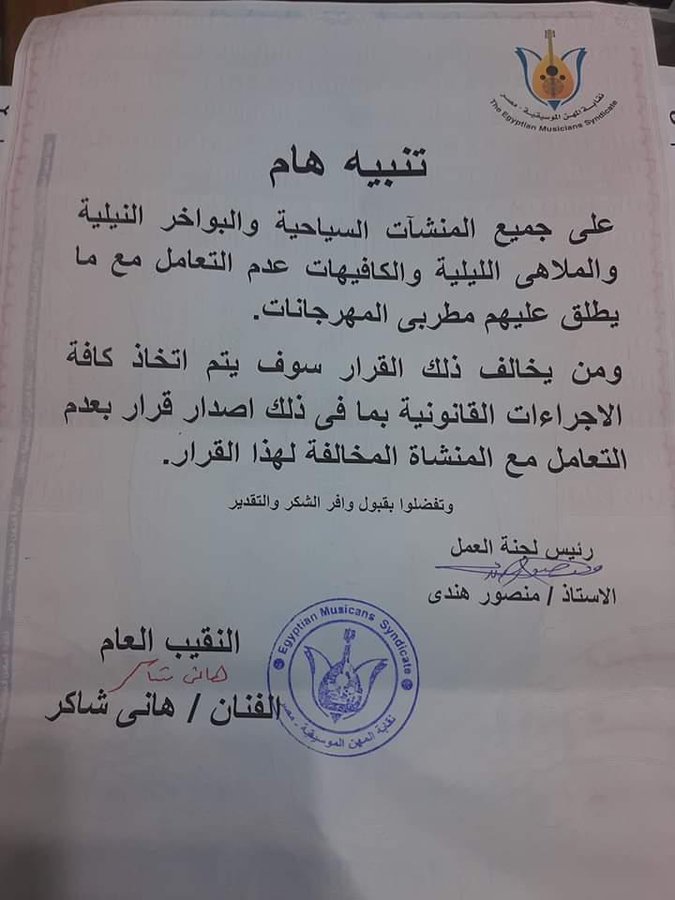 Mahraganat is known to have originated among the neighborhoods and slums of Cairo around 2006-7, where wedding DJs began combining chaabi (folk) music and electronic dance music with various influences from reggaeton, grime and rap.

In a Rolling Stone feature article, it was dubbed as Egypt’s new ‘musical revolution’, which was ‘created by and for an uncertain youth in the wake of a tumultuous, post-Mubarak Egypt.’

The songs usually include lyrics that discuss politics, sex, and day-to-day life of the youth living in these neighborhoods, which is mostly explicit and never mentioned in mainstream Egyptian music.