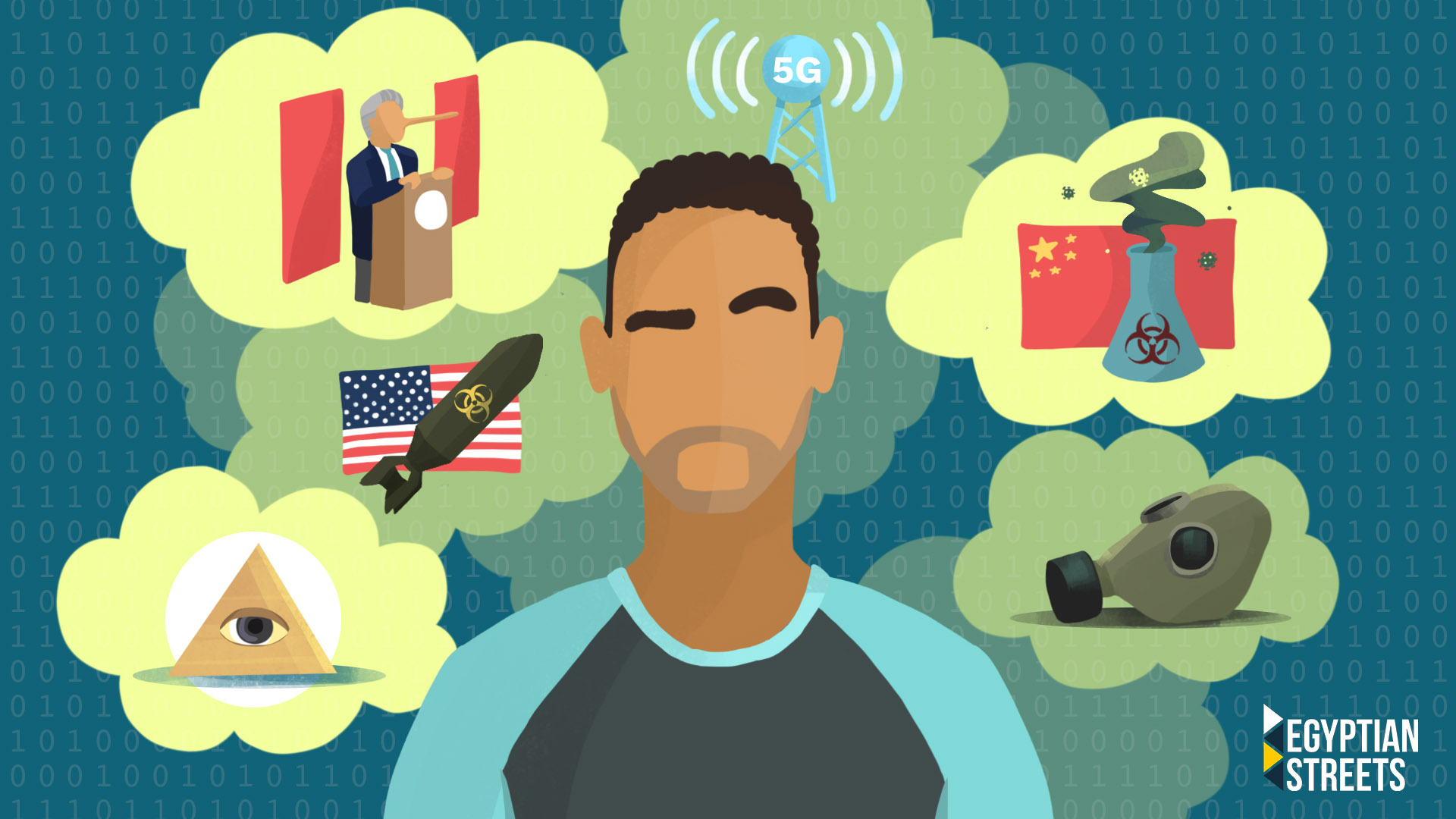 A conspiracy theory starts with a warm glow, a comforting notion that worms its way into one’s mind and promises that there is a method to the madness. It is a fairly digestible premise that underlies much of our attempts to make sense of the world—from physics to humanities.

Unlike science and the sum of human knowledge, however, conspiracy theories are often unfalsifiable and unknowable. They linger in the back of our minds, consigned to the limbo of fanciful ideas, where they remain unproven, but too outlandish to conclusively disprove.

Conspiracy theories emerge from the depths of our despair, under the guise of healthy skepticism, spinning tales of omnipotent conspirators lying in wait for us. They rear their paradoxical heads every time our faculties are strained by questions we don’t know the answers to, whispering, what if? After all, isn’t magic just science we don’t understand yet?

“When things are unclear, it is normal for people to search for explanations, sometimes this results in a wide array of possible theories as to why things are happening. This is particularly true in high stress and crisis situations,” renowned clinical psychologist Anne Justus tells Egyptian Streets.

In ordinary times, conspiracy theories dwell in the seedy underbelly of the internet, but in the age of coronavirus, they are encroaching dangerously close to mainstream consciousness, garnering a cult following of keyboard warriors, slapdash journalists and charismatic news anchors and charlatans ready to pass their pseudo knowledge to anyone who will listen.

Since the onset of the COVID-19 pandemic, numerous unsubstantiated claims have been made about the disease’s origin, the most enduring being that the virus is a Chinese/American biological weapon—the word “Chinese” is used interchangeably with “American” depending on the interlocutor’s allegiance, political views and personal prejudices.

Both claims were conclusively and thoroughly debunked by a slew of scientists, medical experts and, most recently, the World Health Organization (WHO). “All available evidence suggests the virus [is of] animal origin and is not [a] manipulated or constructed virus in a lab or somewhere else,” WHO spokesperson Fadela Chaib said during a Geneva news briefing, Egyptian newspaper Al Ahram reported earlier this month.

Another unlikely theory suggests that American tech billionaire Bill Gates, in his capacity as a stand-in for the ‘deep state’, has a hand in ‘engineering’ the virus. Proponents of this theory insist that Gates and his cohorts in the American establishment have fomented this crisis to unseat current US President Donald Trump. Others claim that Gates is scheming to roll out a worldwide vaccination campaign and install microchips in as many people as possible as a means of tracking and controlling them.

But the most absurd (and easily debunkable) conspiracy theory to come out about the coronavirus pandemic has got to be the firmly held belief among many that 5G mobile networks are behind the spread of COVID-19. It is not clear where this theory originated from, but those who believe it claim that the virus is transmitted via radio waves, which is physically impossible.

All conspiracy theories are not created equally, however. Some are far more dangerous than others. In India and the UK, far right groups have gone as far as blaming Muslims for the outbreak, with false claims that members of the community are selling contaminated food and breaking public healthy and safety regulations by continuing to hold religious gatherings.

In Iran, home to one of the world’s oldest Jewish communities, state-owned Press TV reported that “Zionist elements developed a deadlier strain of coronavirus against Iran.” Similar antisemitic dog whistles were echoed by white supremacists in the US and on Turkish media.

These trends of thought, collated with the legitimate and valid themes and narratives that make up the larger COVID-19 conversation, are a recipe for disaster.

The discourse surrounding power structures and the management of the pandemic has been marked by a general distrust of authority, and rightfully so. Governments and political leaders have over the course of this crisis given their peoples many misgivings—from China’s desperate attempts to downplay the gravity of the disease by silencing Dr. Li Wenliang, to the Trump administration’s callous response to the pandemic.

Mistrust of authority is nothing new. Imbedded in our collective consciousness are histories of heinous betrayals and treacheries that date back to the beginning of time. We are taught to fear, question and even spurn power, not only for its corrupting influence on those who wield it, but also for its infinite potential to inflict evil on those who don’t.

According to a survey by the Organisation for Economic Cooperation and Development (OECD) an international body of 30 member states, including the US, the UK and most EU countries, only 43 percent of citizens trust their governments.

The 2020 global report by the Edelman Trust Barometer yielded similar results, only 42 percent of people expressed trust in their respective governments. The survey also found that those with higher cultural capital, typically found “in the top 25 percent of household income per age group” in their respective markets, were more trusting of NGOs, business, government and the media.

These findings are consistent with age-old and often well-founded misgivings about power and authority, which take on a life of their own in times of crisis. That is what makes conspiracy theories so dangerous and darkly alluring to some. They appeal to that which is so fundamental and instinctual to us: doubt.

According to The Conspiracy Theory Handbook by Stephan Lewandowsky and John Cook, skepticism is a natural stage of the conventional thinking process where only facts inform conclusions. Conspiratorial thinking, on the other hand, is marked by overriding suspicion and a tendency to dismiss facts and evidence that don’t fit predetermined outcomes.

Conspiracy theories also fulfill our cognitive needs on a much more basic level. A research paper authored by Karen M. Douglas, Robbie M. Sutton, and Aleksandra Cichocka of Kent University’s School of Psychology suggests that “people may be drawn to conspiracy theories when—compared with nonconspiracy explanations—they promise to satisfy important social psychological motives that can be characterized as epistemic (e.g., the desire for understanding, accuracy, and subjective certainty), existential (e.g., the desire for control and security), and social (e.g., the desire to maintain a positive image of the self or group).”

These theories are then reinforced by our own confirmation bias, where proven past misdeeds and conspiracies are used as reference points—from Watergate, all the way to the Jayson Blair affair. This phenomenon was first observed by Stanford University researchers who in 1975 conducted an experiment on a group of undergrads, in which the students were asked to evaluate the authenticity of suicide notes.

The subjects were split into two groups. One was told they had successfully identified the genuine letters, while the other group of students was told they had failed to spot the authentic suicide notes. The researchers then told the students that the purpose of the experiment was to “gauge their responses to thinking they were right or wrong.”

Subjects who were initially told they had successfully identified the genuine letters continued to believe they had performed well even after they were proven wrong. Similarly, those who were initially told that they failed believed they performed “significantly worse” than the average student. The researchers concluded that “once formed, impressions are remarkably perseverant,” according to The New Yorker.

This tendency to obstinate ourselves against facts and evidence contrary to our deep-seated misgivings is a defense mechanism we have developed over generations to spare us the heartbreaking disillusionment of failed revolutions and disappointing politicians.

Stripped of the context in which conspiratorial thinking informs public debate, it is easy to dismiss these theories as fringe political ideologies, but the growing prevalence of conspiracy theories is symptomatic of the erosion of public trust in existing power structures—be it the media, the political establishment, the billionaire class or indeed capitalism itself.

Research has shown that one’s trust in political, social and cultural establishments are strong indicators of their economic status, which further highlights the parallel realities created by inequality.

With the unrelenting spread of COVID-19, thousands are losing their livelihoods everyday, healthcare professionals are rationing medical resources and making life and death decisions, authoritarian regimes are consolidating their powers and billionaires continue to amass wealth. The sheer grief and indignation that come with that reality is enough to rob anyone of their capacity for reason.

And while conspiracy theories may offer answers in times of uncertainty, they are seldom the right answers. To surrender our minds to charlatans and hate mongers now would be to disengage from the most important conversation of our time: the world post-COVID-19. Now more than ever, we need to hold our governments accountable and negotiate our definition of this new normal to ensure a future in which no one is left behind and no one is easy prey to conspiracy theorists.