Correlation Between Eating Habits and Mental Health: From Food to Mood

“I love food, it makes me happy and my life revolves around it,” enthuses 22-year-old Salma*.

Salma* has noticed that what she eats highly impacts her mood and how she feels. She says that she had been aware of the effect, although she never fully focused on the correlation until a few years ago.
“It started back in school when I was already underweight and thought that I needed to lose more weight. Whenever I’d gain a little bit of weight, I’d instantly go on this diet, which affected my metabolism because my weight kept fluctuating,” she explains.

“Fast forwards, a few years later, I lost 10 kilos and I would try to maintain this weight, so I’d find myself restraining from indulging. I was very hard on myself in terms of what I should and shouldn’t eat. It grew out of proportion and it became an issue of maintaining my weight no matter what. There would be times where I would cheat [have a free meal] and when I’d do, it would ruin my mood for the entire week and I’d start binging as a way of punishing myself,” she adds.

There is a strong correlation between diets and mental health. Poor diets, for example, play a role in developing mood disorders such as anxiety or depression. According to Harvard Medical School, food is more like the fuel that keeps humans’ brain “on” all the time, even while sleeping, it directly affects how the brain functions and accordingly affects one’s mood. Thus, the brain functions at its best when it gets the best fuel, which for example could be food that contains vitamins.

On the other hand, highly refined ‘sugar’ food is harmful to the brain, as it worsens the body’s insulin which would increase its chances of being afflicted with stress and inflammation. The correlation between highly refined sugar and brain function could lead to mood disorders, such as depression.

A 2019 Harvard study has shown that depression, more often than not, results from a chemical imbalance. Factors that could lead to depression vary, including “faulty mood regulation by the brain, genetic vulnerability, stressful life events, medications, and medical problems. It’s believed that several of these forces interact to bring on depression.”

“Diets rich in refined sugar are far from healthy to the brain. [These diets] also affect the normal insulin regulation of the body. Such unhealthy food can also cause inflammation and oxidative stress. Some research studies highlighted how too much refined sugar can impair normal brain function and worsen symptoms of some psychiatric disorders like depression,” says Ola Morsy, Director of Student Well-being Center at the American University in Cairo.

Morsy explains that people who follow traditional diets, such as the Mediterrean diet, have a 30 percent less risk of suffering from depression compared to people on Western diets. “That is because traditional diets depend mostly on fish, seafood, vegetables and fruits in contrast to refined sugar and carbohydrates in the Western diet,” she adds.

Your Diet Affects How You Physically and Emotionally Feel

Salma* explains that she was close to developing an eating disorder as feelings of guilt and shame were pushing her off the verge of obsession towards maintaining an ideal body image.

But then one day, she realized that part of being healthy is to keep her mental well-being in check.

“One of the things that brings me genuine happiness is food, and restraining myself led to horrible circumstances that affected my body and my emotional wellbeing, so I slowly started getting familiar with the idea that it is okay to eat. Then, I sought help a little while after, and my therapist told me I was close to developing an eating disorder, so I guess I was lucky,” she says.

The correlation between eating habits and mood fluctuations can be explained from a scientific perspective.

Heba El Bannan, an ISSA certified nutritionist, explains that the correlation between eating habits and mental health is based on the fact that some foods trigger the release of dopamine in the brain. This is the case for yogurt, eggs, almonds and beans.

“There are foods that are linked to increased serotonin levels such as salmon, nuts, seeds, turkey, pineapple and Vitamin D,” she breaks down.

Salma’s* case of almost developing a disorder, as explained by El Bannan, is strongly related to negative emotions and eating behaviors. Other eating disorders such as anorexia nervosa, bulimia nervosa, and binge eating could develop from not being aware of the effect of dietary habits.

“Trying hard to maintain an ideal self image will do more harm than good, the first step towards [feeling] good about ourselves is to accept and change. Maintaining a healthy lifestyle while enjoying the food is the only way to achieve good results, one step at a time,” El Bannan tells Egyptian Streets. 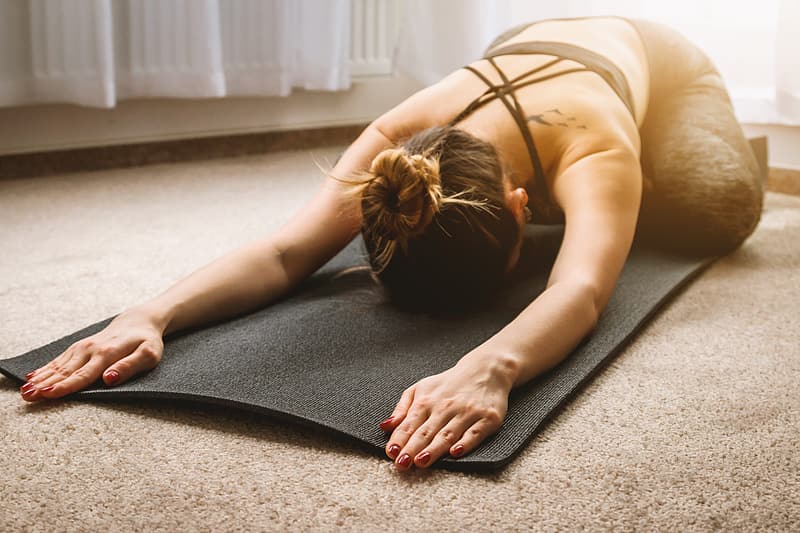 Which is what Salma* did, with the help of her family, friends and therapist. “I was lucky enough to be around people who noticed my obsessions and patterned behavior around food before it could’ve developed into something more severe,” she says .

To overcome a negative mentality, Salma* has been adopting a healthier mindset towards food, where she eats whatever she wants in proportion, because she sees restraint as conducive to increased cravings. This would result in binging as well as feelings of guilt and obsessiveness.

The surrounding community plays a role in reframing mindsets towards eating habits, because changing them at once and breaking the myth of an ideal body image is difficult.

Riem Maklad, 21, had to deal with the implications of gaining or losing weight. “It happened ever since I was in grade 11 when I got depressed and started binging and purging, food was my only way out of my head at the time and society did not help much, either by pointing out each kg I lost or gained over the years,” she says.

Maklad adds that she had developed a toxic eating behaviour out of this situation, which is purging whenever she eats junk food. However, she was able to overcome it after a while seeking professional help. “When my mental health declined to life risking manners, along the way I learned to cope with my depression and thus with my eating habits,” she explains.

After a while, she felt more honest with herself and her body image and was confident to say that she had an overall more positive outlook on the food she consumes.

“If anything, our society is spreading false “ideal” body image of what a woman’s body should look like and I feel like this is backfiring because a lot of women can’t accept their bodies unless they’re stick thin. Which, in turn, can manifest a lot of eating disorders with the goal of looking like one of those skinny models no matter what. And it is scary because that “no matter what” mindset is what leads to disasters in the long run,” Salma* says.

Spreading awareness regarding this matter is key, El Bannan says that awareness level differs from one community to another. Most probably, people are aware of the fact that what they eat affects their physical health, regardless of their mental health.

“To raise awareness, we have to start with schools, [kids must be educated] about healthy and mindful eating. As for adults, media plays a key role in letting [them] understand what they should and should not eat,” she says.

Morsy adds that social media campaigns should be done by popular celebrities. “They should be emphasizing the importance of good food choices for their health and mental wellbeing,” she says.

If Salma* was to tell herself something a few years ago, she said that it would be to resist giving into her obsessions and let go of control. “To try and go a little easier on myself because I have achieved a lot but with what I used to do, it would always make me feel like I haven’t done enough and I needed to do more, and this is essentially where my problem was. And finally, that it isn’t the end of the world if I ate a cookie throughout an entire day of eating clean,” she added.

'Hagat Helwa': Exploring Egyptian Femininity From Past to Present
Ash: the French-Egyptian Musician Dominating Streaming Platforms Around the World

Ash: the French-Egyptian Musician Dominating Streaming Platforms Around the World
‘Hagat Helwa’: Exploring Egyptian Femininity From Past to Present