When she boarded her plane to Bali, Indonesia the day after her wedding, Mai Abdelhay, a 26-year-old digital marketing specialist, did not expect to be at a hospital in Cairo less than a week later, surrounded by her family, physically unable to speak.

“It looks like you have MS,” the doctor barked at her. “And you’ll have to stay here in the hospital for five more days and take an intensive course of cortisone.”

What MS was, she did not know. All she knew was that on the second day of her honeymoon, she began to experience strange symptoms with no warning. Perhaps the fatigue and lack of energy could be explained by the effort she had exerted in the runup to her wedding, but what about the numbness in the left side of her face and the rigidness of her jaw?

By the time the fourth day of her honeymoon came, Mai was unable to speak properly. All her questions, the pleas for help and advice she directed at the doctors in Indonesia, she communicated by typing out on her phone. At that point, she and her husband had no choice but to conclude that something was seriously wrong, and they boarded a plane home. 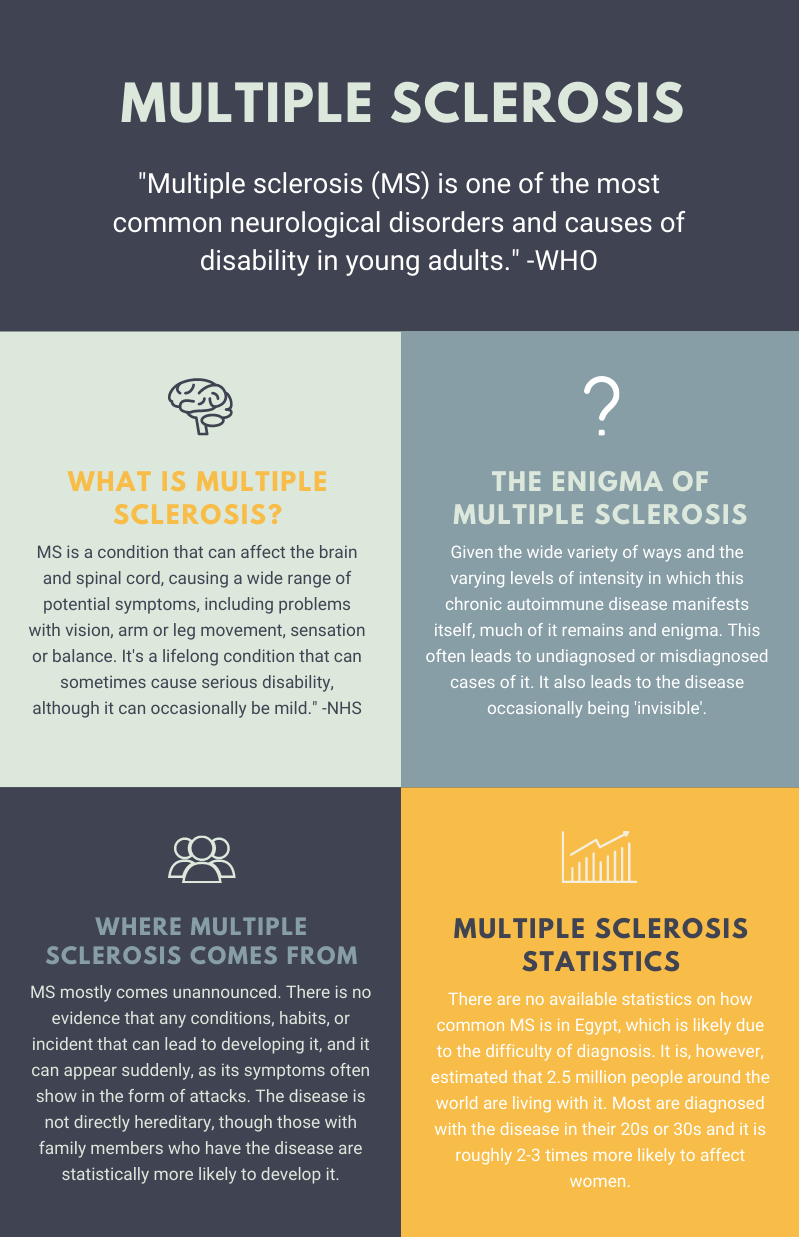 The doctor in Cairo told her she had no option but to take that course of cortisone. “This is an attack,” he said. “MS comes in attacks.”

After nearly a week of confusion and treatment in the hospital, Abdelhay finally went home to deal with the new reality she suddenly found herself in with no warning, mere days after her wedding.

How does having MS affect everyday life?

The effect of MS on its patients varies significantly from person to person, so Abdelhay’s case may not be identical to that of others living with the condition. The enigma surrounding it frequently leads to misdiagnosed or entirely undiagnosed cases.

“It’s very new to me,” she told Egyptian Streets. “I’m still learning and still reading about it. Even doctors are still struggling with understanding it fully. Some of the doctors I’ve spoken to told me that they’ve only encountered this disease in textbooks and exams.”

But in reality, MS, a disease that stays with the patient for life, is one of the most common causes of disabilities among young adults, as it normally makes its first appearance in a patient’s 20s or 30s.

But after a difficult experience with the doctor who made the initial diagnosis, Abdelhay later found herself being advised by more helpful and supportive physicians.

“The second doctor told me how much my mental and emotional state affected the situation,” Abdelhay explained. “The severity of how I experience this disease is affected by my mental well-being.”

So living her life normally and finding ways to enjoy herself was among the doctor’s prescription to Abdelhay’s road to well-being. That, along with trying to eat gluten-free.

But the more challenging prescription was that of the medication she was instructed to take on a weekly basis. Abdelhay told Egyptian Streets that the day she self-administers that injection is a day lost to severe head and body aches.

“If I’m going to take the medication at, say, 7 p.m., it feels like I start experiencing the symptoms at 3 p.m. already, because of how much I’m dreading them,” she said.

While in the early days of her diagnosis Abdelhay went to a pharmacist to give her the shot, things changed with the spread of COVID-19, and she no longer felt safe leaving the house for this purpose.

Living with an autoimmune disease makes Multiple Sclerosis patients among the at-risk groups, so Abdelhay had no choice but to take every recommended safety precaution to heart, something she doesn’t share with many people around her.

“People make fun of how fussy I am about COVID-19, they ask ‘Mai, why do you use disinfectant so often, Mai, why are you always wearing a mask?’ But so often they don’t know what I’m dealing with. They don’t know the anxiety of knowing that even the smallest thing could trigger an attack.”

But this Abdelhay is a far cry from pre-diagnosis Abdelhay. She told Egyptian Streets that she had always been the epitome of spontaneity before.

“I was the kind of person who would travel on a whim. Sign up for a course at a moment’s decision. Climb Mount Catherine. After this experience and trauma, I calculate everything a hundred times before I do it,” Abdehay said.

But in spite of this, Abdelhay has some experience with seeing – and showing others – the silver lining in difficult situations. And with that exact purpose in mind, she created the Instagram account MSerxMasr.

Before her diagnosis a year ago, she had already been dedicated to regularly honouring the memory of her late sister Menna, who lost her life after a long struggle with disease. After her first doctors failed to diagnose her case of Lupus – also an autoimmune disease – for years, thereby giving her medication that led to the worsening of her state, she was diagnosed with stage four cancer.

But through the pain of losing her sister, Abdelhay saw the strength she had displayed through her struggle, and the positivity and purpose she had exuded as she continued to pursue her passions and meet life with a smile. That was when Abdelhay decided to tell her sister’s story to bring hope and motivation.

When Abdelhay herself was diagnosed with a chronic disease, making sense of her new life was a long and arduous process. In fact, she says that she has not fully made sense of it yet. But as time passed, she became aware of important and helpful it is to have access to advice, empathy, and community in the struggle with the disease.

Abdelhay, who returned to work for the first time since her diagnosis less than two months ago, explained that one of the trickiest things about the disease is that it is “seen, and not seen.” In front of you is someone who seems healthy, but is suffering from chronic pains, risk of attacks, and constant anxiety over the state of their health.

“Whenever I googled the condition, I only ever found stories about people abroad. But I needed to read something that I could really relate to. I wanted to feel like there was someone out there who was like me, who felt what I was feeling, someone who understood me, someone who’s going through what I’m going through,” Abdelhay told Egyptian Streets.

“I wanted to feel seen, heard, appreciated,” she said, and cited that as one of the reasons she decided to create a page that Egyptian MS patients can turn to for that empathy and sense of community.

But another reason that pushed her to create her cheerful, informative Instagram posts was that she found that many people around her did not know how to approach her, knowing that she was an MS patient. Too often they knew, and pretended that they did not.

But for Abdelhay, and surely for many other MS patients, the preferred option would be for people not to tiptoe around her, and to make an effort to understand her condition. Her target audience was not only people who lived with the disease, but also those who want to understand it for their loved ones, or simply to be informed.

“I want to be asked, ‘Mai, what is MS? Do you feel like talking about it? How do I deal with people who have it?'” she said. She would always take that over the pity she often receives.

And indeed since she turned to Instagram for this purpose, she has received phone calls and messages from people with questions about the disease.

“I felt grateful that I was able to use what I had learned to directly help someone. I could never tell them what to do, because every case is different, but I could provide support, and I was so grateful for that.”

In spite of the seriousness of the topic that Abdelhay chose to handle on her Instagram account, she said that she learned from her sister the vital lesson of maintaining positivity and hope in the face of adversity.

“The way you deal with what’s happening in your life sets the tone for everything else,” Abdelhay said. “I know I may be going through a difficult situation, but I believe that people should know about MS, that this disease exists. And they can learn about this from what I’m writing.”