Over the past few weeks, Egyptian social media has been abuzz with reports of a now notorious outfit emblazoned with the demeaning and offensive words Egyptian women face everyday in their ongoing struggle against Egypt’s sexual harassment epidemic. Created by Egyptian interdisciplinary artist Sara Ayman Ragab, the outfit debuted at Cairo’s Mashrabia, not as fashion, but as part of an installation in which art not only imitated life, but was plucked right out of Ragab’s wardrobe. 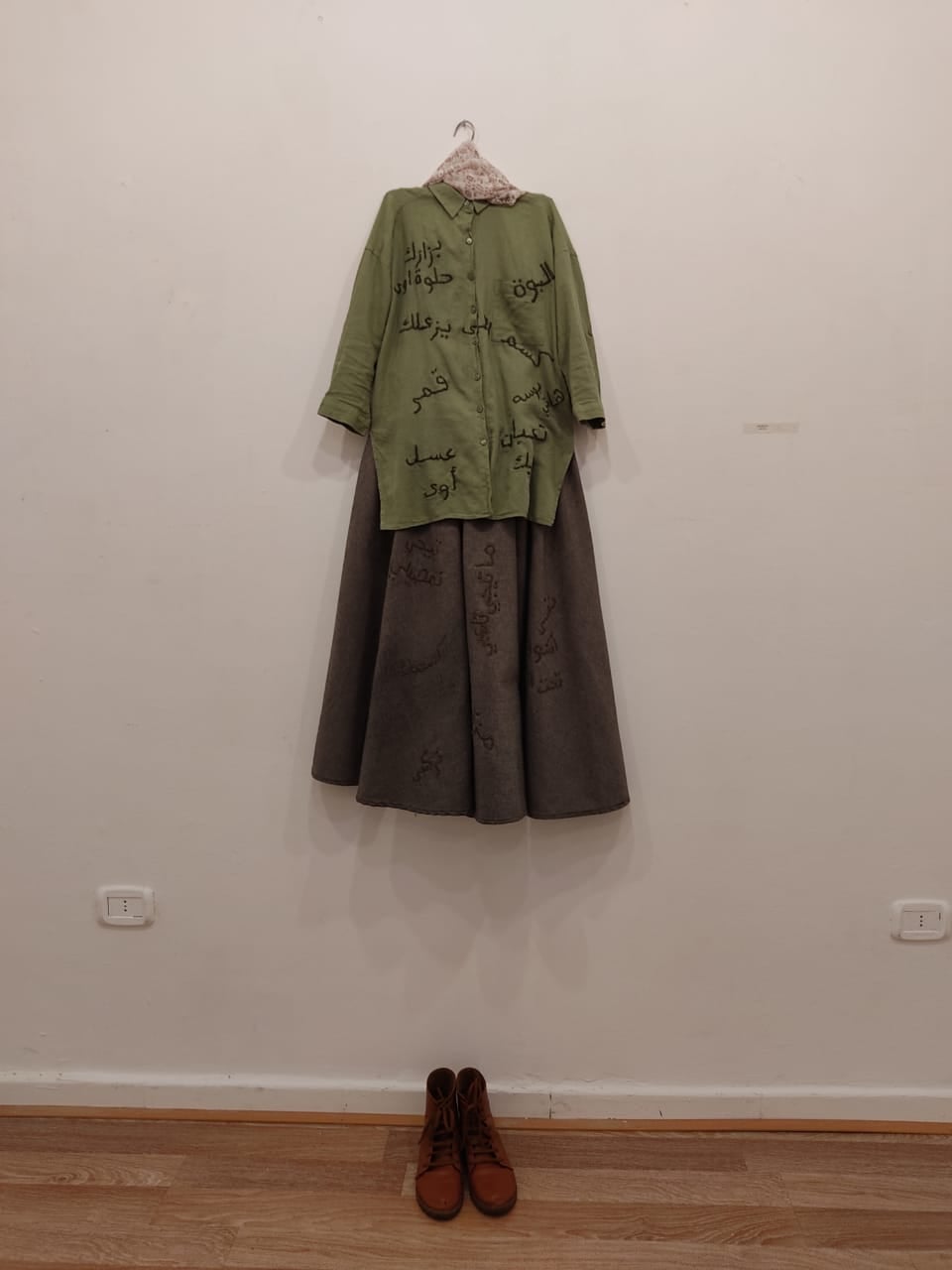 Using her own clothes as the canvas on which to capture some of the urban horror Egyptian women experience in public spaces, the artist adopts candid realism and renders a damning portrayal of the country’s culture of street harassment and catcalling.

Jarring and enraging, the lewd language and obscenities stitched into the artist’s clothes become a rallying cry for Egypt’s ongoing #MeToo movement, catapulting Ragab into the national limelight. Egyptian Streets caught up with the artist to talk feminism, art and the power of commiseration among women.

Can you tell us more about your career as an artist? How did you first get started?

I graduated from the Applied Arts department, faculty of Media Studies at the New Cairo Academy. I have participated in several exhibitions before and I have been [active] for three years.

At first, I wanted to explore the feelings and emotions that one can’t talk about, or the things we all feel but don’t express. Most of my work relies on writing and painting, and this is perhaps the influence media studies have had on me—so I don’t just do oil paintings and aesthetics, which is unusual to a lot of people.

What other projects have you previously worked on?

I have worked on a project tackling child sexual abuse, around the time of the Ganna Hafez case, right when it happened. I tried to present it at the Ministry of Culture’s Annual Youth Salon competition, but it was rejected and hasn’t been shown anywhere yet.

Can you tell us more about your latest installation, the sexual harassment outfit?

I decided to tackle the verbal harassment I have experienced every single day of my life, and to express it using my own clothes, what I wear when I go out. I decided to write on it the crude things I hear every time I leave my house. With the #MeToo movement going on and platforms like Assault Police around, I felt emboldened to talk about this issue and felt that it had to be shown. We all stay silent, especially us women—we stay silent about the things that happen to us because many think they are the only ones subjected to this or that not all girls experience the same.

When #MeToo happened, most girls started talking, using the hashtag, and they started recounting what happens to them and what they experience, and this is, of course, a good thing. This work inspired a lot of women and made them speak out. A lot of girls now send me stories of the sexual harassment they experience, and this is an important shift I was able to effect with this work.

How was people’s response to the project?

I made it a point not to share it on my Facebook until the exhibition at Mashrabia gallery. I intentionally waited to hear people’s feedback towards the piece first [from gallery attendants], before showing it [on my social media] and responding to all or most of the comments. Honestly, people were always responding to the negative feedback—so people were actually engaging in a dialogue and that was such a beautiful thing to come out of this, that it started this debate and conversation.

A lot of people supported the project and most of them were women, of course. They contacted me, sent me their own stories and experiences, and thanked me for expressing something we can’t talk about.

There were also a lot of people against the project and they were outraged that these crude terms were displayed like that, to which the answer is simply that this offensive language is what we are subjected to on the streets. A lot of people thought it was ‘extra’ and that this is not the kind of language sexual harassers use and, of course, women fought back to dispel that. They were the ones responding to these comments—like, oh, you think this is bad? You should listen to what we hear on the streets!

I also conducted a poll on Instagram, asking women to tell me about the sexual harassment and catcalling they experience on the streets and I received shocking answers and awful stories. I was shocked. I didn’t think there would be anything worse than what I wrote on the clothes, but I realized that there is so much worse out there.

A lot of people said it wasn’t art because it is not a painting … they don’t understand that art can be conceptual or something that can be used for social commentary, it doesn’t have to be a painting of a flower. There are so many issues we, as a society, need to talk about. As artists with platforms, we should highlight and tackle these issues, whichever way we can.

Do you identify as a feminist?

I don’t like the label ‘feminist’. I think each label usually emerges as a pure concept and then it starts getting distorted by people by indirectly inserting their own beliefs under it. So I don’t like to have any labels [projected on me or my work]. [Sexual abuse] is an issue that faces half or even 3/4 of society, it is about girls and women and children—I have also received messages from men recounting their own experiences with sexual harassment [and abuse]. So it is no longer feminists vs. non-feminists, like, oh she is talking about sexual harassment that happens to girls! To which I say, girls are part of society. If we call anyone who talks about women’s issues a feminist, then we would all be feminists.

How important is feminism for the survival of women artists like yourself and the art you create?

Feminism is important for this work and for these issues, because a big part of that ideology is about dealing with these issues, so it will certainly spotlight this type of art and these issues, and that is a good thing.

We are presenting an issue and a cause—I don’t know if this project will solve anything, I hope it does, but at the end of the day, it isn’t intended to provide a solution and it can’t achieve that.

Can you tell us about your future plans? What is next for you as an artist? What do you want to be recognized and remembered for?

I don’t like to put myself in a certain category or limit myself to one thing. I am not the type of person who will always tackle social issues in their art, but I am also not someone who will produce things that have nothing to do with their community. I felt the need to say something about that issue at that particular time, so I did.

Perhaps later I will want to go back to my initial style of art or talk about entirely different things or tackle social issues, I honestly don’t know. I don’t like to commit myself to something that I might not be able to achieve and be disappointed with myself. But I hope that my art will always have a message and inspire at least one person. My latest project has touched many people and many women and that is great and I hope that my work continues to do that.

5 of Cairo’s Best Vintage and Thrift Stores Bringing Retro Back
'Imagine if Every Girl in Egypt was Educated': Meet Activist Jana Amin

‘Imagine if Every Girl in Egypt was Educated’: Meet Activist Jana Amin
5 of Cairo’s Best Vintage and Thrift Stores Bringing Retro Back