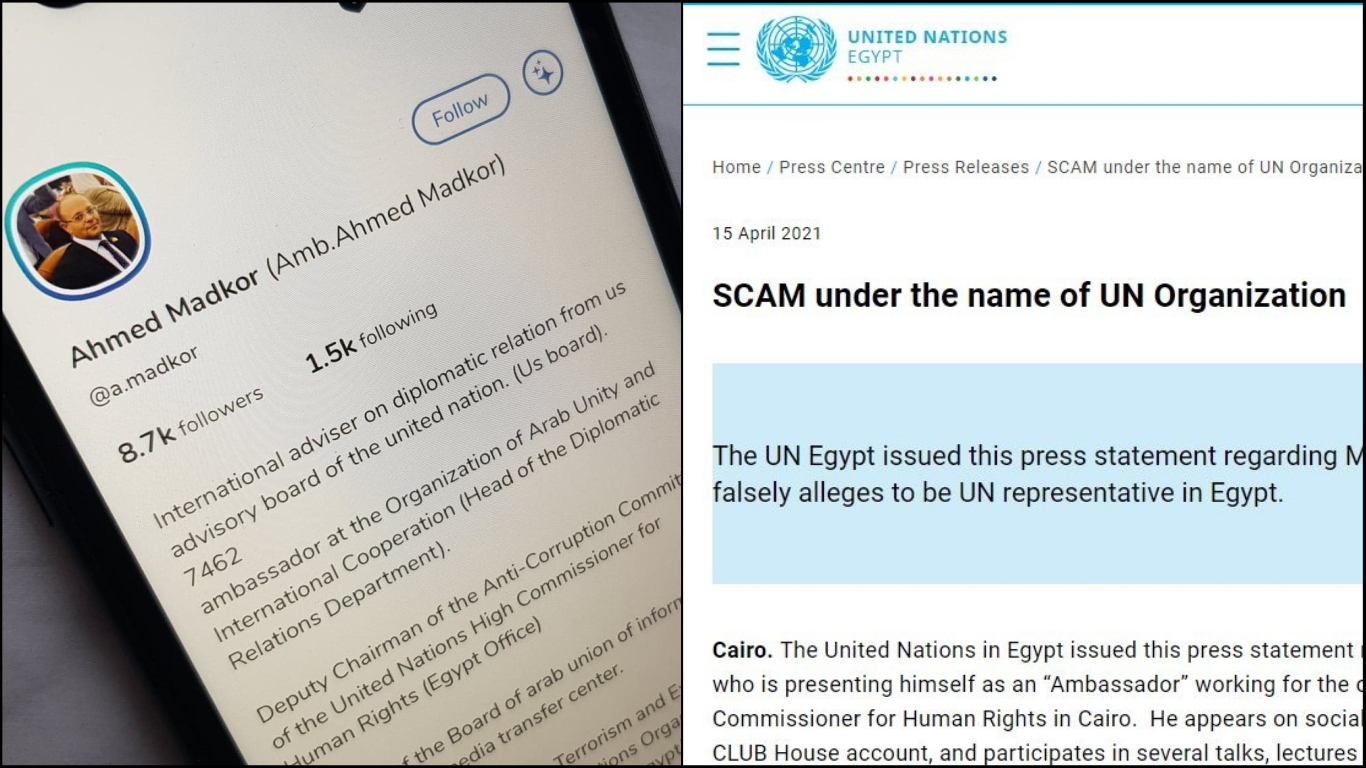 The United Nations in Egypt issued a statement on Friday evening warning against an individual who it says falsely alleges to be its representative.

The statement, which was also shared by the UN’s Information Centre in Cairo, comes after similar reports regarding the same individual presenting himself as an Egyptian Ambassador and a member Mostaqbal Watan, a leading Egyptian political party.

In its statement, published in both English and Arabic, the UN said that Mr Ahmed Madkor, who the UN says has been presenting himself on social media as an “Ambassador” working for the Office of the United Nations High Commissioner for Human Rights in Cairo, “does not represent the UN in any capacity”.

“He appears on social media platforms, through a Clubhouse account, and participates in several talks, lectures with different groups of people, alleged to be a ‘UN Representative’ stating his opinion on critical topics regarding political issues in Egypt,” alleged the UN in a the statement about Madkor’s activities on Clubhouse, an exclusive, iPhone-only social media network.

“Mr. Ahmed Madkor does not represent the UN in any capacity. In this regard, the United Nations in Egypt rejects any violation conducted under its name and any wrongdoing or interference in the internal affairs that take place in its name, stressing that the United Nations expresses its views through official statements to the newspapers and the United Nations webpages and social media accounts,” concluded the statement, which has since been shared on Al-Masry Al-Youm and Al-Shorouk.

From Members of Parliament to Egyptian Women: How Madkor Came to the UN’s Attention

Clubhouse is a social media network that first hit the Egyptian market in February, quickly gaining popularity among iPhone users in the country.

The app, which is currently invitation-only and will be available on Android later this year, allows both friends and strangers to connect in ‘rooms’ and ‘clubs’ to listen in on various topics initiated by moderators and their guests. Anyone who enters a room can ‘raise their hand’ to be invited to the ‘stage’ to speak alongside the moderators and guests. Users also have a public profile that contains their biography, photograph and relevant social media links.

In March, controversy erupted on the social network among Egyptian users after the individual identified by the UN as Ahmed Madkor was exposed by other users for allegedly fabricating his identity and credentials in order to mislead and deceive Clubhouse users.

“He would go into rooms, present himself as an Egyptian diplomat, sometimes as an Ambassador, sometimes as a UN worker, and talk to people in Egypt and around the world in that capacity,” said one Clubhouse user who preferred to remain anonymous in a comment to Egyptian Streets.

“People believed he was an Ambassador and that he did indeed hold a position with the UN and other bodies,” added the user, noting that this allowed Madkor to amass more than 8,000 followers on the application.

Egyptian Streets’ own reporters first came across Madkor shortly after he had joined Clubhouse on 26 February. At the time, his name appeared as “Amb. Ahmed Madkor” and his bio simply read “Politician – diplomatic – businessman”, accompanied with an Egyptian flag and a UN flag.

By 10 March, Madkor had gained more than 1,000 followers and had included a long list of credentials and roles in both English and Arabic (exact English extract below):

ambassador at the Organization of Arab Unity and International Cooperation (Head of the Diplomatic Relations Department).

Member of the Board of arab union of information technology& media transfer center.

Director of the government relations department in afdal platform.

Member of the Counter-Terrorism and Extremism Committee of the United Nations Organization for a Just and Comprehensive Peace(egypt).

Peace Ambassador for the International organization for Development and Human Rights.

[Appearing in Arabic text only: Assistant Secretary of Trade and Industry at Mostaqbal Watan, Giza]

Madkor continued to quickly gain followers, including members of parliament, media personalities and even activist Wael Ghonim. He started entering rooms and discussions about feminism, the Muslim Brotherhood, Egyptian-US ties and more, with others often referring to him as “His Excellency” and “Mr Ambassador”.

“He told us he is the Egyptian Ambassador in the USA,” said one Saudi Clubhouse user in a comment to Egyptian Streets.

“Because of that statement, I followed him. I thought he really is an Ambassador and would really think about the opinions he shared and value them”.

Madkor also shared the stage in Clubhouse rooms with various Members of Egyptian Parliament and the Egyptian Senate, often speaking about political issues and engagement with Egyptian youth. In at least one case, Madkor was the person who sent an invite and nominated an Egyptian parliamentarian to join Clubhouse (on Clubhouse, the person who invited a user to join the social network is shown on the user’s profile). That parliamentarian is a senior figure in Mostaqbal Watan, one of Egypt’s largest political parties, and shared the stage alongside Madkor in a talk started and moderated by Madkor.

It is unclear whether these parliamentarians and Senate members were aware of Madkor’s allegedly falsified credentials, but on a number of occasions, they would refer to him as “Mr Ambassador” and “His Excellency”.

However, Madkor’s presence on Clubhouse wasn’t limited to politics. He would also enter rooms about women’s rights, often dismissing the views expressed by Egyptian women as exaggerated.

“He joined rooms about sexual harassment and would attack us [women] as if we’re traitors, compromising Egypt’s national security,” said one Egyptian woman who encountered Madkor in a number of rooms.

“Unfortunately, some moderators would just let him speak and let him demean us because they thought he was representing the Egyptian State”.

As Madkor continued to gain popularity on Clubhouse, some individuals had raised their concerns, questioning his credentials and identity. In each case, Madkor would claim to have been granted the title of “Ambassador” by an “independent diplomatic institution” and that he works with, and holds a diplomatic passport issued by, the UN.

It wasn’t until 2 April that the extent of his allegedly fabricated identity was exposed.

Following a number of rooms a day earlier regarding Madkor’s alleged fabrications, which managed to collectively attract more than 2,000 listeners, Egyptian journalist Mohamed El-Garhy published a substantial report on Facebook and Twitter about Madkor’s history.

“It started by coincidence during my participation in a room on Clubhouse,” said El-Garhy in comments to Egyptian Streets when asked how he got involved in exposing Madkor.

“I found a piece of information [about Madkor] that led me to other more interesting information and so forth. My motives were professional and patriotic, to uncover complex corruption, as the case is not just about impersonation, but it also contains fraudulent activity as well as a threat to national security that could cause a diplomatic crisis, whether with other countries or the United Nations”.

El-Garhy’s report on 2 April, which was shared to his 440,000+ followers on Twitter and 72,000+ on Facebook, alleged that Madkor worked for “fictitious organizations” and that one such organization had previously been raided by Egyptian security members for issuing fake certificates, fake diplomatic passports and for allowing members to present themselves as diplomats.

The Egyptian journalist also revealed that Leader Light, which Madkor claims to have founded, had been dissolved according to official records.

However, these statements do not explain Madkor’s relationship with senior members of Mostaqbal Watan and the fact that Madkor had nominated at least one of them to join Clubhouse. 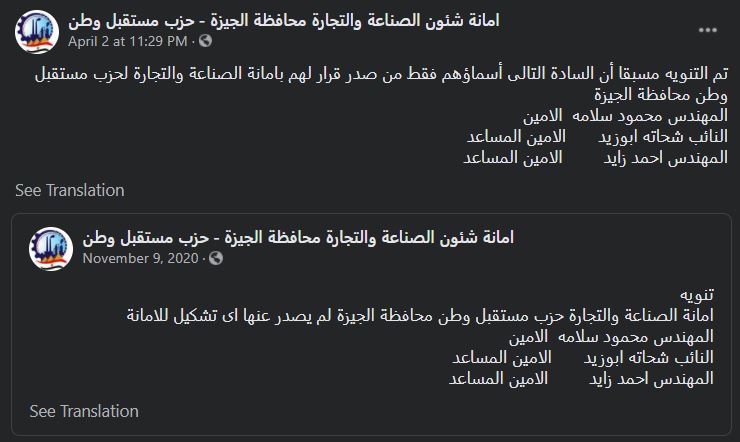 Despite the evidence presented by El-Garhy, Madkor continued to defend himself and even had large numbers of supporters on Clubhouse claiming that he had been a “victim” and that those exposing him were simply trying to tarnish the image of Egypt.

However, on 5 April, El-Garhy released a second bombshell report alleging that Madkor had illegally purchased diplomatic vehicles with diplomatic licence plates from foreign diplomats that had since left the country, has a criminal record and is wanted for imprisonment for issuing cheques without sufficient funds and had previously been arrested and released on bail for threatening a man with a gun.

Since the release of the report, Madkor has struggled to find support on Clubhouse, with users from Egypt and across the Arab world sharing how they were allegedly duped by the man.

In particular, Clubhouse users in Egypt have expressed their concerns regarding Madkor’s alleged purchase and use of diplomatic vehicles, which could pose a national security concern given that diplomatic vehicles are often afforded privileges such as fewer security checks.

“The most dangerous thing [that can happen] is if these cars are used for terrorist or criminal acts without being searched,” said El-Garhy to Egyptian Streets when asked what surprised him the most about the evidence he had uncovered.

“The second important matter is this fraudster’s continued position and appearance on Clubhouse without his arrest or disappearance, and his insistence that he is still working for the United Nations despite its issuance of an official statement that [Madkor] does not represent it in any capacity. This is something unbelievable!”

“In regards to the statement released by the United Nations, I have read it and sent it to the manager of the office I work with and he said he will look into the matter with the United Nations,” said Madkor, as heard by an Egyptian Streets reporter, before he was booted from the room by the moderators.

“I would be lying if I said I knew the answer. The matter is confusing to me as I had revealed [other] corruption stories similar to this story before, but as soon as they were published, the [individuals involved] disappeared and would not appear again,” said El-Garhy when asked why he believes Madkor continues to keep up his act.

“[Madkor] was active politically and commercially, which is inconsistent with diplomatic norms and he escaped from his [work] sponsor in Saudi Arabia where he worked at a lighting store until 2018. But, he still clings to his false stories about his work as an Ambassador without any evidence. I think the case needs to be studied and analysed by professors of psychology and specialists in the mental health and behaviour field, because what is happening, in terms of [Madkor’s] denial and insistence, is unnatural!”

Madkor’s latest denial echo earlier comments he made on Clubhouse, where he threatened to sue El-Garhy and others for tarnishing his image and spreading lies about him. In those earlier comments, in addition to insisting he worked with the UN, Madkor often said he had the support of Shaher Noureddin, the President of the Organization of Arab Unity and International Cooperation which Madkor says he works at as the Head of the Diplomatic Relations Department.

A video released by the Ministry of Interior in December 2019 said that Noureddin had “admitted to his criminal activities” and added that “he does not have any official diplomatic status in any international organization”. 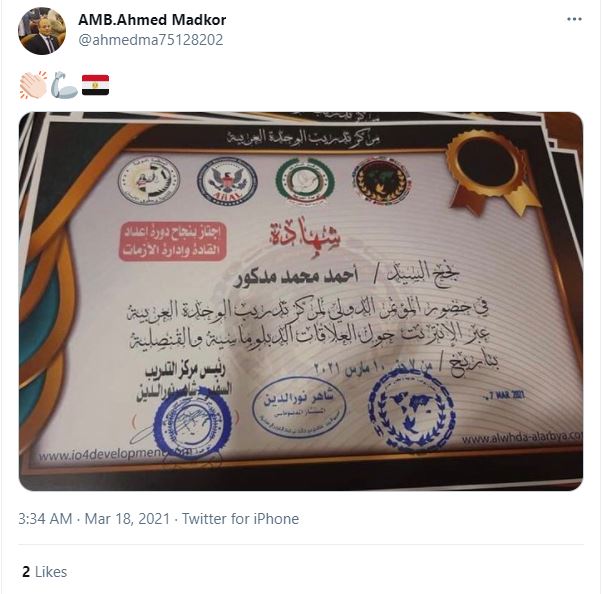 Relevant authorities have reportedly been informed of Madkor’s actions, including the Egyptian Ministry of Foreign Affairs and the Egyptian Public Prosecution.

Public servants of the Egyptian Ministry of Foreign Affairs have also been seen liking and commenting on El-Garhy’s reports, with one such person sharing a statement clarifying that only members of the Egyptian Foreign Ministry can present themselves using the title “Ambassador”.

It remains to be seen whether any legal action will be taken against Madkor and any others found to be acting in violation of Egyptian and international laws, but with the UN’s statement on Friday, pressure has been added on Egyptian authorities to act.