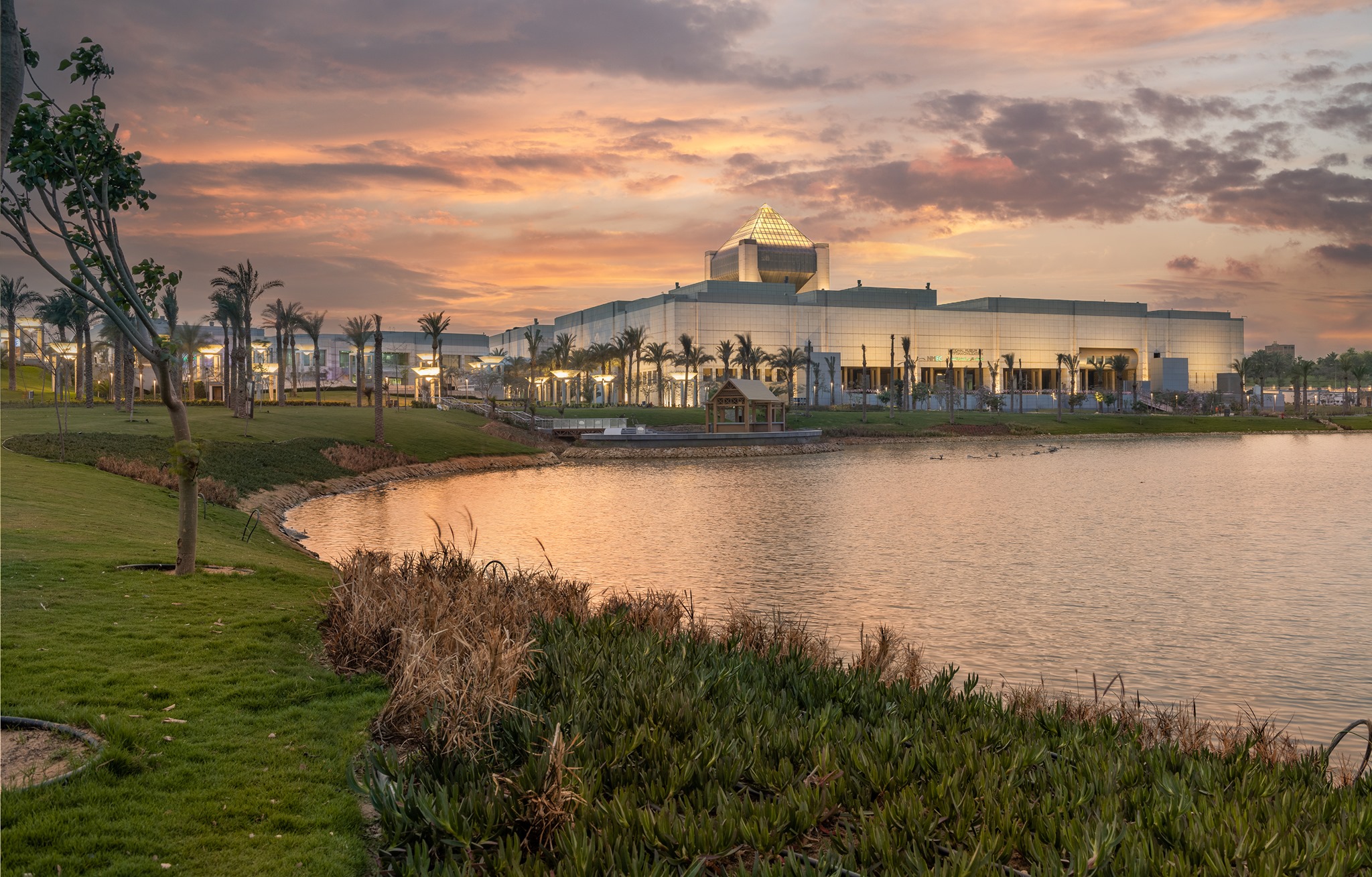 “We’re different, we’re unique, we’re special, and I bet you, if you come and you don’t like it, I, as the head of this authority, will give you your money back!” exclaims Dr. Ahmed Ghoneim, Head of the Authority of the National Museum for Egyptian Civilization (NMEC), when asked about the newly-inaugurated museum in Al Fustat, Cairo.

When the NMEC was inaugurated with the arrival of the royal mummies in the Golden Parade held in April 2021, it became apparent that it was more than just another museum in Egypt. Starting with the predynastic period into the pharaonic, followed by the Graeco-Roman, Coptic, and Islamic periods, up until modern day Egypt, the museum encompasses the array of different time spans and ‘civilizations’ that contributed to Egypt’s rich history.

In addition to a tour of the Main Hall and the Royal Mummies Hall, Egyptian Streets sat for an interview with Dr. Ghoneim to discuss what makes the museum special, COVID-19’s impact on it, the artifacts on display, and much more.

What makes the NMEC special compared to the many other museums in Egypt?

There are four aspects that make the NMEC different from all other museums in Egypt, and – I would say – in the Middle East and North Africa (MENA) region.

Firstly, the museum comprises all the civilizations that passed through Egypt starting 35,000 years ago; going through the different families of the pharaonic era, and then through the Greek and Roman eras, the Coptic and Islamic eras, and then the contemporary period.

The NMEC takes the visitor on a journey through [all the] civilizations that passed by Egypt in one room, in one hour. It doesn’t just display pieces; there’s a story behind the displays, which might be a number of pieces or objects put together to tell you a story about motherhood, cooking, medicine, or music, and how [a piece in a certain era] is related to other eras that are displayed. There is something unique in this regard; normally when you go to any museum [in Egypt], it is focused on the Pharaonic era or the Coptic or Islamic [eras], so to have them all in one place and see the stories behind them makes it unique.

The second aspect that makes it different is the mummies. Since the mummies were [previously] in the Egyptian Museum in Tahrir square, people wonder what’s new about having them here. Here, they are displayed in a way that’s completely different from the way they were displayed before. [When entering the Royal Mummies’ Hall], the whole mood, the lighting, and even the decorations give off the feeling that you’re entering a tomb.

The third aspect is the use of technology. [With younger generations], whenever they were told that they’re going to a museum, they would usually go [for a school trip] and feel like it’s an obligatory activity. However, we speak the same language that the whole world speaks now, which is technology.

We have interactive and interdisciplinary [tech-driven] ways to deal with the visitor. There are videos next to the displayed objects which tell the story of why or how an artifact was used as well as its material, and there are interactive screens where you can easily access more information about it.

There are some QR codes that you’ll find when you go to the Mummies Hall, which you can scan to access information about the 20 queens and kings that we have here.

Number four, which is the most important, is that we are far more than a museum. We’re called a museum by law, but we see ourselves as a cultural hub. We see anything related to civilization, culture, and heritage as our role to promote.

Apart from the Golden Parade, what other efforts are you doing to attract people to the museum or promote it in general?

We intend to [position NMEC as] a journey that you experience in a whole day; it’s not just a museum.

We have a Roman theater, where we hosted harpist Manal Mohy Eddin just before Eid. She was playing Egyptian music in a nice atmosphere, with the museum in the background. There is a harp displayed inside the museum, so that was the message we were trying to send [by hiring a harpist]. We also hosted the El Leila El Kebeera show (an Egyptian puppet operetta written by Salah Jahin) three times; we’re not intending to sell tickets right now, we’re just hosting it for promotion.

And finally, we have what we call a scientific research center such as up-to-date labs and some apparatus that you can find only in the Louvre in Paris and Abu Dhabi as well as restoration centers.

The establishment is more of a complex combining entertainment, historical, and cultural elements and antiquities in one place.

Who do you consider your target audience?

Before I came here, the whole idea of a museum was that it would always target tourists. Now, because of the lockdown and because of the period we’re living in, I thought that would be a wrong strategy to start with. You can always use virtual tours, but that’s not the same feeling.

I started thinking that the right clients for this place are not foreigners at this stage, at least in the first stage; the right clients and visitors are Egyptians. You might wonder: ‘Which Egyptians are we talking about? We have different social categories, financial abilities, and cultural backgrounds, so who are you targeting?’

I’m targeting the whole population, and you can see this when you visit. You’ll see people from all over Egypt; people from different governorates coming just for one day, elderly people, and even the very young generations, so that’s [the answer regarding] the museum itself.

When it comes to cultural [development], the [establishment] allows us to have different cultural events targeting different [demographics]. A light show for a musician and El Leila El Kebeera would target different tastes, for example.

We’re trying to be a cultural hub for all Egyptians. Now comes the question that you’ll ask about who can afford to come here. The museum ticket is not expensive for Egyptians, and we have a lot of exemptions. When it comes to cultural activities, we take this into account; some take place for commercial reasons, but we are not a profit-making organization. We are an economic authority, but we have a societal role we have to play.

You mentioned COVID-19 and how you changed your strategy because of it. Can you tell us more about how it affected the museum?

Let’s start with the Golden Parade and the opening of this museum. A lot of people were saying ‘Why are you having an opening at the time when the whole word is locked down? Who’s going to come to you, who are you promoting to?’

The lockdown actually had a significant positive effect for us because everyone was staying at home. It was held on a Saturday night so [people in] the US and Canada are able to watch. More than 60 broadcasting channels were able to broadcast it. Now comes the thought: ‘but they’re not coming; they just watched it.’, However, it remained in their memory; so whenever the lockdown is over, these people will come.

Simultaneously, we started organizing some demand-driven virtual tours [for organizations], but we take all the necessary [precautions] to ensure our copyrights [are protected]; we don’t want our museum to be available for everyone all the time [at the click of a button]. We’re trying different strategies; it’s [our way of] trying to cope with the situation.

What’s the significance of the museum’s location in Al Fustat?

The location in itself is an attracting point. At the beginning, it was a negative point because the area was not renovated and reaching it was a bit difficult. But now, with the effort made by the Egyptian government to renovate the whole area, it has affected us positively. The NMEC became at the center of Al Fustat, the first Islamic capital of Egypt, and the government is intending to renovate the whole area, not only the museum. So this is benefiting us and you can see this all around; [renovation] is happening and most of the slums are being removed.

Reader’s note: Built by Amr Ibn Al As, the general who led the Muslim conquest of Egypt between 639 and 646 AD, Al Fustat was the first capital of Egypt under Islamic rule. It is located in Old Cairo.

How many artifacts are in storage and how many are on display?

We have almost 50,000 pieces, and we can take up to 70,000 or 80,000. The ones that are displayed are 1,600 pieces in the main hall. We have other halls that we will open, one of which will depend more on multimedia and overseeing the whole of Cairo.

We will also open a temporary exhibition, ongoing for six months, and then it can be replaced by another exhibition. Hopefully, those are going to open within six months.

How is the decision to put something on display made?

There is a special committee that undertakes the decision; it’s not an individual decision.

Can you talk us through the challenges of moving artifacts here from other museums, particularly the mummies?

With mummies, in general there are no big problems because we are part of the Ministry of Tourism and Antiquities, so we are all one family. Exchanging artifacts is a normal occurrence. The problems are more related to bureaucracy because the Ministry of Interior has to be involved whenever a piece is transferred. Additionally, some of the pieces are extremely heavy, you need to make sure that the crane is able to move them and that the floor is able to carry them; there are more logistical challenges there.

The concern [with moving the mummies] was in the transportation phase; the only two big challenges were [road] bumps and [loading the mummies] into the cars, which is why they were placed in nitrogen capsules [to ensure their safe arrival].

What’s your favorite artifact or historical period in the museum?

A number of pieces. Among them is [the mummy of] Akhenaton, another is the first [prosthetic limb] fabricated during the Pharaonic era. Those are the two pieces that are very dear to my heart, I would say.

The part [of the exhibition] that showcases the Coptic, Jewish, and Islamic [eras]. For me, that’s Egypt, Egypt is not only Coptic, it’s not only Islamic, and the Jewish element is there as well; this has a message for the whole world.