“My biggest wish is for the city to be rebuilt again and I can come back to live here,” says Haj Muhammed, one of the former residents in Umm Al Huwaytat. “Even though it is now left completely destroyed and abandoned, I still come here to bring back old memories.”

Walking around broken and dilapidated houses, the air we breathed carried a weight of emotions; of sadness, laughter, passions, thoughts, memories, and existence. The mountains rewarded us with sunsets of extraordinary blues and pinks; rekindling the spirit in our hearts and making us gasp at the splendour.

Taking us on a journey to an unknown and hidden past, Haj Muhammed spoke of the history of the city of Umm Al Huwaytat – now known as the Ghost City – and Safaga, which is located south of Hurghada and was a merchant port for many years, and is famous for its scuba diving activities and therapeutic presence. 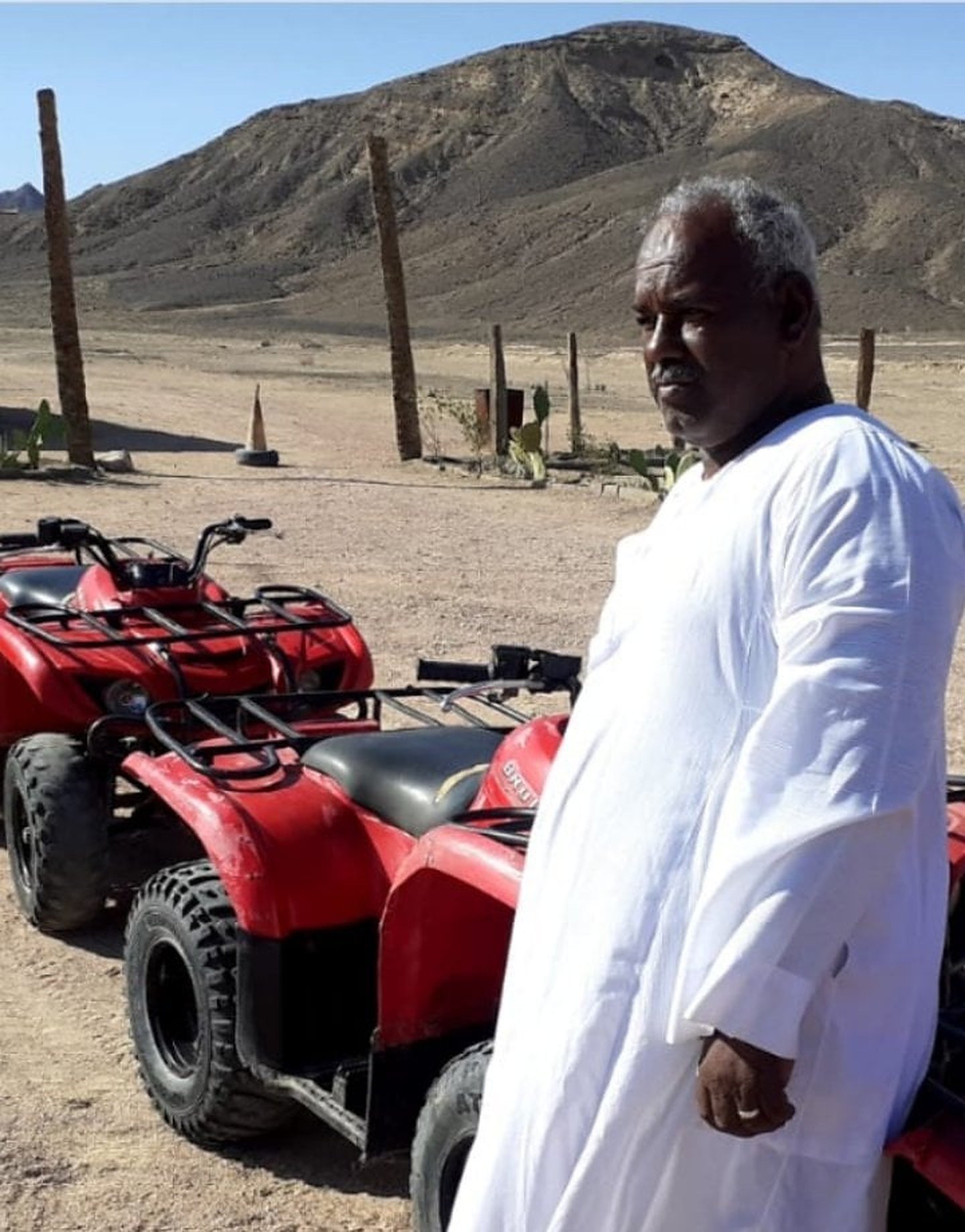 “The second you step into the city, you are completely engulfed by the place, and you no longer remember where you came from or where you should go. It is known to be one of the most healing, spiritual and therapeutic places in the world,” Haj Muhammed tells us. “I was once a tour guide for a German group, and they stayed here to meditate until 1 am, even past the trip’s time, because they were fascinated by how spiritual the place is.”

Though he lived his entire childhood in Umm Al Huwaytat, the city’s history is wrapped up in mystery and tragedy. Umm Al Huwaytat was founded in 1898, a decade following the Orabi nationalist revolution that took place from 1879 to 1882 against the British colonialists in Egypt.

Referring to him as “Mr Andy”, Haj Muhammed told us how the entire city was the creation of one Englishman.

“Mr Andy was a geologist who came here when there was no one at all, and yet he discovered raw materials in the desert and established a very high proportion of phosphate, which was an important mineral in the fertilizer industry. Safaga was not found even on the map back then or even existed, and so he created the city to ship the raw materials from Umm Al Huwaytat to Safaga, then to the port for shipment to England,” he said.

“He introduced new values and brought a new way of life that as Egyptians we never knew at the time. The first thing he did when he began building the city was establish a school. But it wasn’t like any other school, it was completely modern at the time. There were scientific labs and gardens, which helped the kids learn in a truly inspiring environment,” Haj Muhammed said.

“We were raised on values and a culture that respected knowledge and learning, and it started with the families themselves that pushed the kids to learn. Fast forward to this day, the city produced notable scientists and professors, such as Dr. Abd El-Moniem Ismail at Assiut University, and Dr. Ahmed Ibrahim in the United Kingdom, and this is all because of the values that were nurtured in all of us in this city.”

We entered one of the schools in the city, which was completely destroyed, but still had remains of old drawings on the walls, blackboards, and worn out books and lab cylinders.

“Look at this,” Haj Muhammed said as he pointed to a broken flower pot. “This was the first thing the child saw as he entered the school, the two flowers as he walked up the stairs. Can you imagine what kind of difference and impact it was on the child? We all came from the desert, from nothing, and then we came here to see beautiful greenery…this is how smart urban design inspired the children to come and learn.”

After 1956, the English residents were exiled and Mr Andy left the country, which brought the mining and the city under Egyptian leadership, and the Safaga Phosphate Company was responsible for execution.

However, the tragedy happened in 1996, when a flood caused heavy damage and destroyed the mines and resources. The extent of damage led to the company’s shutdown, and the city was completely neglected and abandoned since then, where it was looted several times by a number of gangs.

Later in the day, we had dinner as we watched the sunset in the heart of the desert. Looking at the mountains and the stars and the sunset was a journey for the soul back home; reminding us of the infinitely healing characteristics of nature. As I lay back and gathered my thoughts on the ghost city, I felt an odd sense of responsibility to bring it back to life for Haj Muhammed, and to make him feel like he’s at home again in his father’s house.

I felt enraged that the city was treated as though it belonged to no human, no family, or no community; that in any second or day or time, our property that we hold so dearly can be stolen and taken away from us…that nothing can belong to us.

I place my hope in tourism that is centered on people’s stories to help connect people with the Ghost City and Haj Muhammed, and revive the history, the memories, and the city itself. Human experience is essentially a story, and just as we travel to discover Egypt’s forces of nature, we should also travel to discover its people; its humans that carry with them years of history and heritage that deserves to be protected and told.

To book a trip, check out Kokopelli World’s page.