Egypt’s Atlantis: the City of Heracleion

To veteran-sleuths and skeptics alike, Atlantis is a well-worn—arguably worn-out—name. Across centuries, it has come to embody humanity’s pull to seductive, elusive histories and the instinctual desire to digest the unknown whole. Atlantis was the promise of a city, tucked into a pocket of inaccessible reality; a city swallowed by the ocean, its stories untold and its gods forgotten.

To this day, Atlantis has not made itself known.

A lost Alexandria has.

To most scholars, it remained a thing of legend; texts delineated an ancient city, mapped its canals and the theology that defined it. Wasting away under the Alexandrian currents, this city was unfound for the better half of three millennia; it was only after decades of screening Egypt’s Abu Qir Bay that French archeologist Franck Goddio and his team witnessed a divine sight: a massive structure, a face in the depths.

Unbeknownst to them at the time, they had made one of humanity’s most alluring finds to date; about 3.5 kilometers off the coast of Alexandria, was an underwater metropolis with upwards of sixty four ships and seven-hundred anchors. Between the gold, the gods, the colossal statues standing sixteen feet tall and the temple of Amun-Gereb, Goddio had finally found what he’d been searching for.

A real Atlantis: they had found the city of Heracleion. 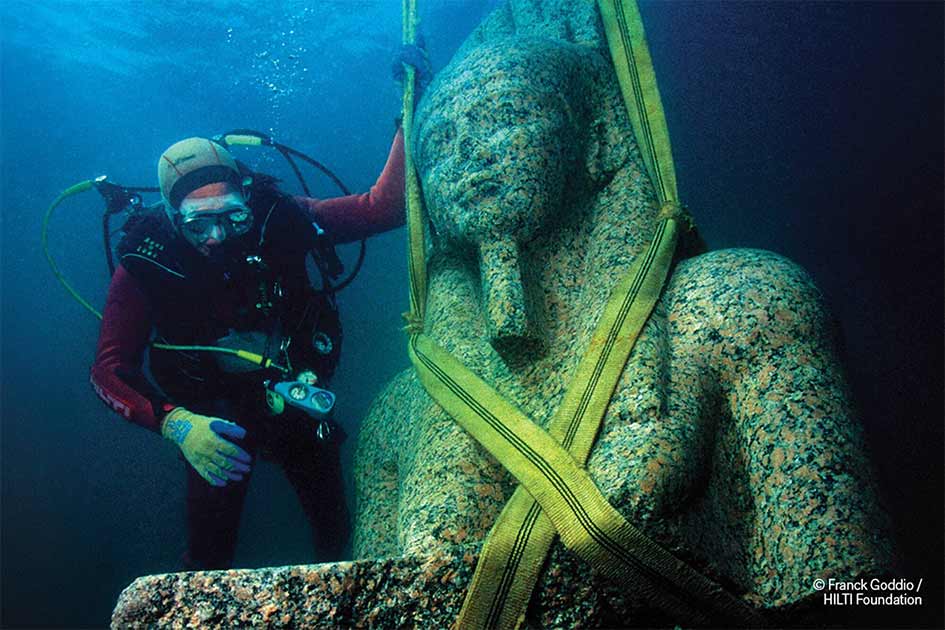 Idyllic and untouched, the city’s remains were a composite of granite and diorite artifacts; much like Pompeii, though far less morbid in its reality, Heracleion is a window into ancient existence some 2,300 years ago. Defined as one of the great ports of the ancient world, the harbor of Thonis-Heracleion delegated all trade in Egypt.

Although the name Heracleion was adopted upon Grecian-Macedonian conquest of Egypt, the city initially went by only Thonis and spanned a substantial period of history prior to Western interest in the area.

From animal sarcophagi to grand shrines, there was a wealth of knowledge present at the site. While many still remain in place, given Abu Qir’s new status as an “underwater museum,” many artifacts have been brought to the surface, now displayed in the Graeco-Roman and Submerged Monuments Suite in Alexandria’s National Museum.

Scholarship is rife with theories as to why the city came to be underwater. The most banal, accepted theory is that of flooding. At one point or another, Heracleion was overcome with rain and rising tides, and thus found itself struggling against the sea. Many believe that this is the sole factor, and perhaps Alexandria’s coastal erosion, brought the city to its metaphorical knees.

However, there is little actually proven about Heracleion’s descent into sea-foam; no definitive answer has been given on why the city sank and why it’s taken so long to uncover it.

Though uncertainty, perhaps, is part of the allure.