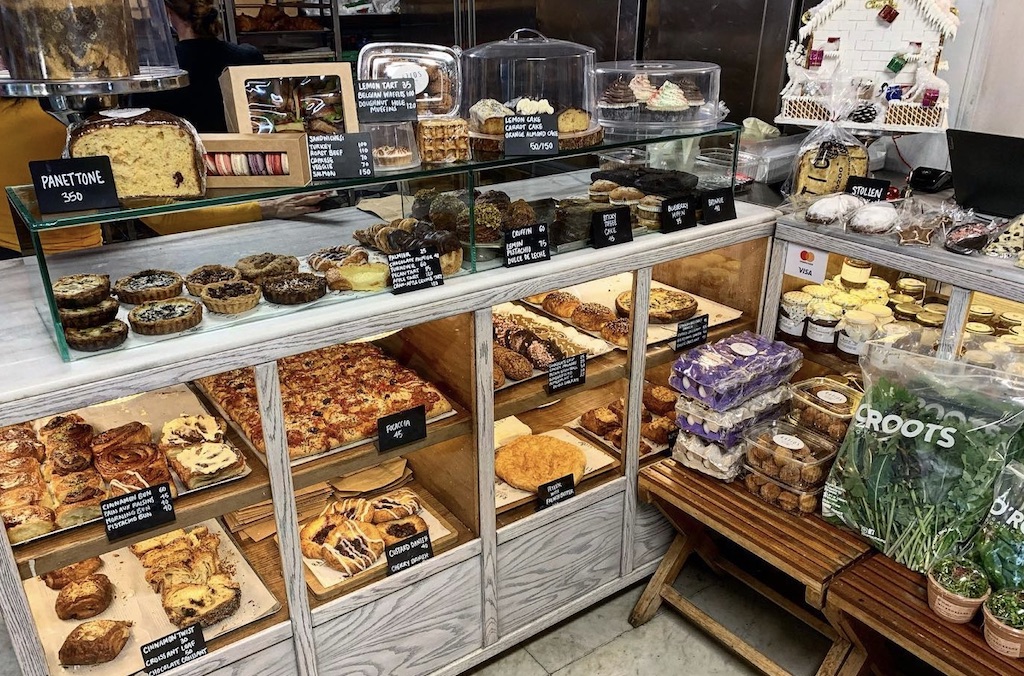 Delectable smells come tipoteing from the oven door, and there is contagious comfort at the sight, smell, and taste of bakeries: brief moments of tangible – and edible – happiness.

Tucked away in a cozy street on road 11 in Maadi, Ratios is a micro bakery that specializes in all things baked: from pastries – sweet and savory creations – to sourdough bread, pizza, sandwiches, and more.

A resident of Maadi myself, I don’t have to travel far from across the capital, like many do, to snatch freshly baked goods. I’m not a morning person myself, but Ratios’ early opening and closing hours get me out of bed earlier than most things do (excluding my full-time job).

It opens its doors everyday – except for Sundays – at 7:30 a.m and closes at 2 p.m. The trick, I noticed, is to go as early as possible, because by noon, the shelves run empty from the high demand.

In early 2021, Ratios opened its doors to the public, and has been a local favorite ever since.

Ratios was initially launched around 2018 as a small, personal endeavor, selling bread only to friends and through word-of-mouth in the Maadi community. The bakery is a family-owned business, Samer Samir is the head baker and co-founder of Ratios, and his wife Jackie Adam is the mastermind behind the sweet and savory recipes.

The couple drew their inspiration from around the world, where Samer began baking sourdough as a hobby after he traveled and sampled artisanal and old world-style bread in Europe and North America. Jackie’s recipes, on the other hand, are inspired by her New England roots.

There is no obvious sign, so it might take new visitors a lap or two around the place until they find it. Upon entering, Ratios exudes a welcoming and inviting aura – a homey like presence. All baked goods are displayed in what feels like a kitchen-like interior, and after selecting, people can enjoy their food in their outside open area.

When the trop de choix tue le choix (too much choice kills the choice) occurs, visitors are also guided by staff members regarding recommendations.

On the many occasions I went to Ratios, there were a few treats that struck me as possibly some of the best baked goods I have tasted in Egypt.

I normally don’t wake up with a sweet tooth, so I generally need to eat something savory in the morning. Accordingly, on one visit,I opted for the Spinach + Mushroom Quiche (EGP 60; USD 3), a creamy egg custard filled with sautéed mushrooms and spinach in a flaky pastry crust. If I didn’t want to save room for dessert, I would have probably ordered another one. If you’re keen on sharing with the family, they also provide the option of ordering the large-sized quiche (EGP 220; USD 11) to enjoy at home.

As a major enthusiast of Fika, a Swedish tradition of coffee and amazingly delicious sweet treats, I went for a slice of the Chocolate Croissant Loaf (EGP 60; USD 3), a braided croissant loaf with a beautiful golden crust, rolled in sugar. You can also order the whole loaf one day in advance. I paired it with a black coffee from their stand outdoors: a combo of perfection in my book.

I also tried their Cruffin (EGP 60; USD 3), a croissant baked in the shape of a muffin, either eaten plain or filled with their homemade cream fillings which range from Dulce de Leche, Lemon, and Pistachio.

On my way out, family in mind, I picked up a whole wheat sourdough loaf (EGP 100; USD 5), which you can also ask for sliced, and a box of Donut Hole Muffins (EGP 130; USD 7), a box of mini soft and buttery muffins with a hint of nutmeg, rolled in cinnamon sugar.

Although Ratios offers a wide array of treats, its early opening and closing hours evidently limit its visitors. However, Ratios has been allotting certain days in the week for delivery – both in and outside of Maadi.

The outdoor area in Ratios is quite small, which is sometimes an inconvenience because people end up taking their food to go. A larger seating area at Ratios would be ideal – especially during the cooler weathers in Egypt since they do not offer indoor seating.

The bakery does not have any other branches – which we would love to see – they did open a small branch in North Coats’s Almaza Bay for the summer.

Overall, in terms of pricing, taste, and friendliness, Ratios offers a perfect balance of all. Their diverse selection of offerings that are hearty and full of favorites: the bakery lives up to the hype as a crowd favorite.