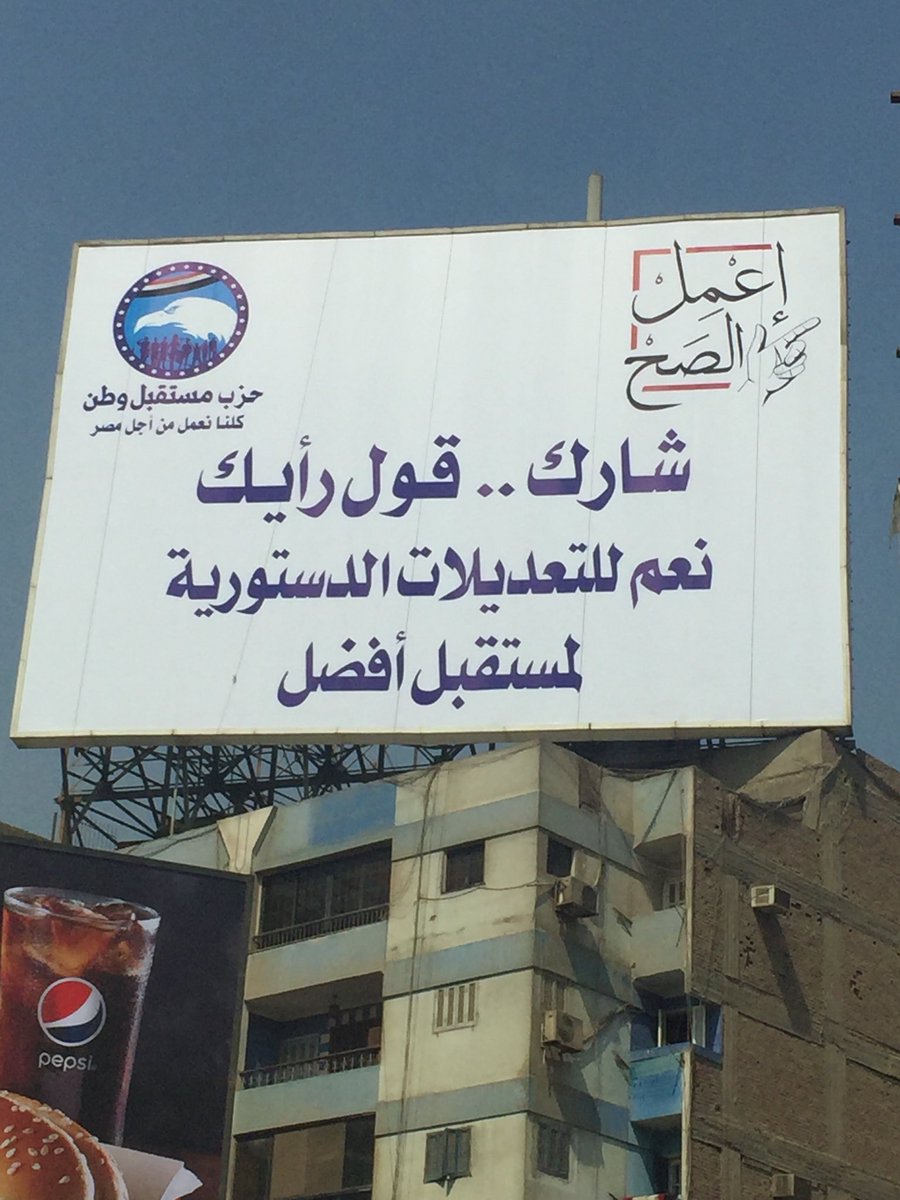 Big banners and posters supporting the constitutional amendments have been put up across Egypt before the parliament takes its official vote on April 14 and the national referendum that is yet to be announced.

The amendments include extending the presidential term from four to six years in Article 140 of the constitution, which could allow President Sisi to stay in power until 2034, and a quota specifying at least 25 percent female representation in parliament as well as an  “appropriate representation” of the youth, farmers, workers and Copts.

The amendments also give the president new authorities over appointing members of the judiciary and increase the army’s role in “safeguarding the constitution and the ideals of democracy, and maintaining a civil state.”

There is suspicion regarding the funding of these posters, yet it is most likely by members of the House of Representatives in the parliament who support the amendments and pro-state political parties, such as the Nation’s Future Party (NFP). 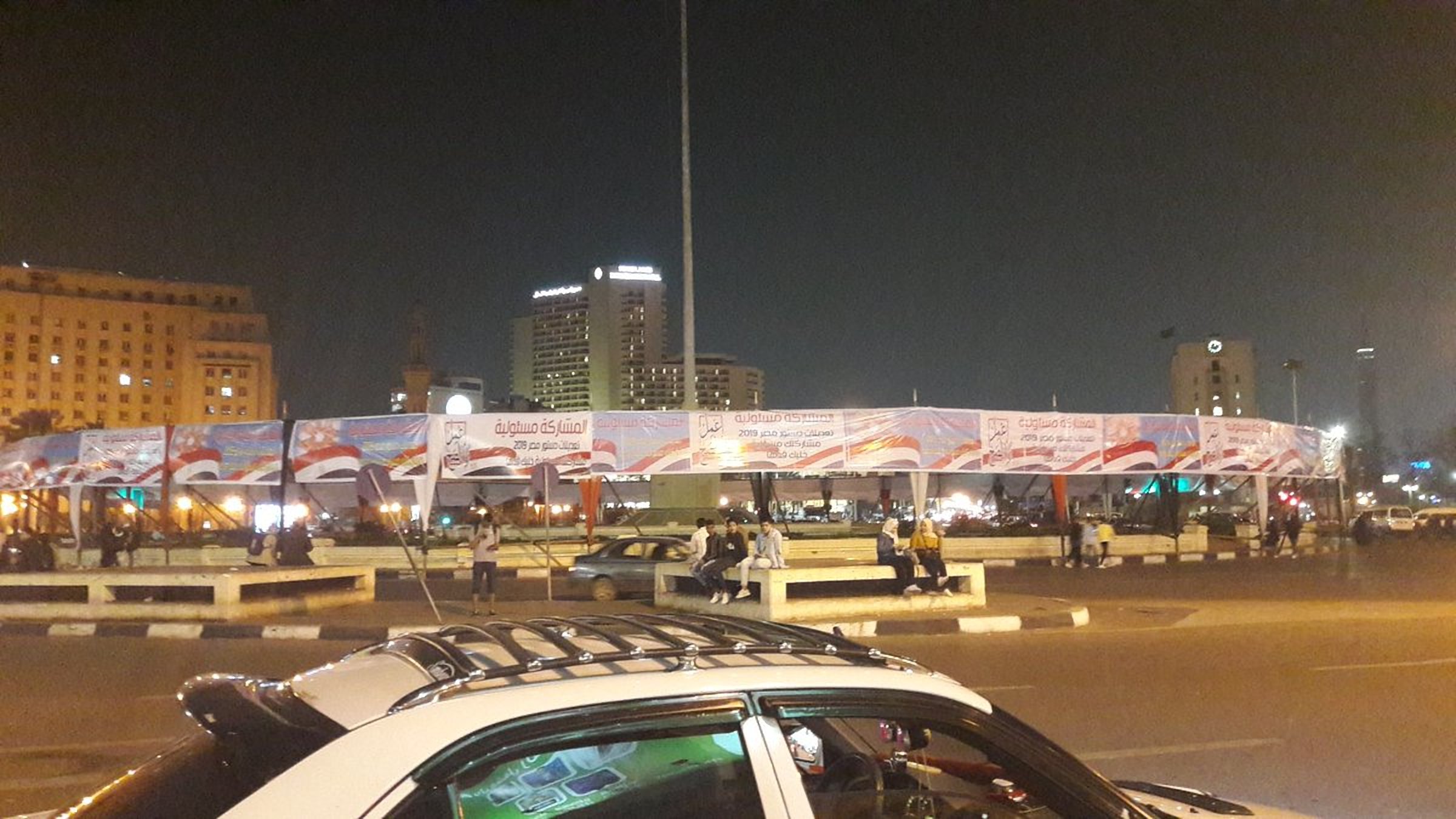 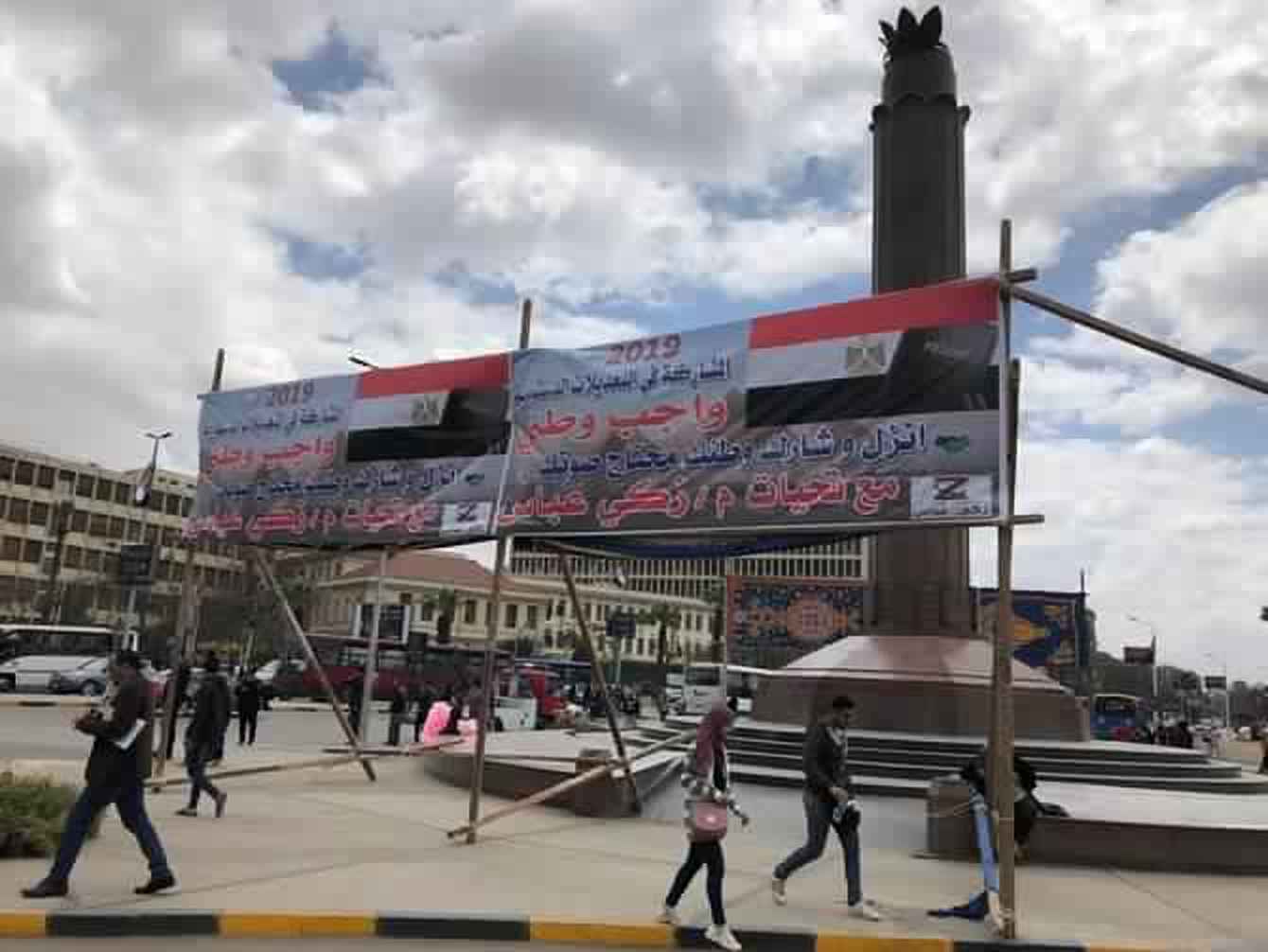 Around 485 members of the parliament who support the amendments have already held hundreds of seminars in various governorates in Egypt, in which they explained the need to participate and vote for the constitutional amendments.

Meanwhile, the parliament is still preparing the ground for the final constitution vote on 14 April, after organizing several hearing sessions throughout last month.

After the hearing sessions were concluded, the Legislative and Constitutional Affairs Committee met this week to finalise a draft of the amendments.

The amendments must first be approved by two-thirds of the members of the House, then it proceeds to a national referendum to be fully enacted into law.

Who is for the amendments?

The parliament took a provisional vote on 14 February, which saw an overwhelming majority (485 out of 596) approve the constitutional amendments.

Parliament speaker Ali Abdel-Aal defended the proposed changes, arguing they will reinforce stability and move Egypt forward on the road to political reform and democratisation.

“When we compiled the first draft of the current 2014 constitution we were under heavy pressure. We had been given one month, and we were doing our job at a time of curfew and terrorist threats,” he said.

“Haven’t we seen many states, some of them members of the UN Security Council, amend their constitutions to increase the presidential term? We also want to have a strong president who can deliver stability and development. And it is up to President Al-Sisi to decide whether he wants to run.”

The Egyptian Federation of Investors held a conference entitled “Constitutional Amendments, Stability for Investment”, which stated that the amendments will ensure more stability and a better investment climate, adding that Sisi’s rule saw greater economic achievements and gains for investors.

Mohamed Rifaat, who works for Amirty for Investment, told Egyptian Streets that as an investor, the current government introduced more flexibility in the laws and created a stable environment that encouraged more investment.

The Egyptian Cultural Club and the Coptic Association in the United States also held a seminar in New Jersey on Saturday for the Egyptian community to discuss  and support the constitutional amendments.

“We are talking here about a real representation of Egyptian women in various fields,” Azir added.

Who is against the amendments?

However, a number of leftist and secular parties as well as several human rights organisations have expressed their objections to the constitutional amendments.

The Egyptian Social Democratic Party, the Karama (Dignity) Party, the Conservatives Party, the Tagammu Party and the Reform and Development Party all denounced the amendments during the hearing sessions on 27 and 28 March.

Mohamed Anwar Al-Sadat, head of the Reform and Development Party, said the amendments “serve the interests of one person”, and described the debate surrounding the amendments as “pre-packaged”.

“The media has been effectively prevented from reporting the dialogue. The only figures allowed to appear on television are those who support the amendments. There has not been a single opposition voice in the national media.”

“The current amendments are an attack on the principle of the rotation of power. They are there to allow one figure to stay in power. They also place the president of the republic as head of the Higher Council for Judges, undermining any separation of powers,” Mohamed Farid Zahran, head of the Egyptian Social Democratic Party, said.

Eight Egyptian human rights NGOs have also rejected calls to amend the constitution, and called on “free Egyptian voices to push on against Al-Sisi’s commitment to the provisions of the 2014 constitution and to leave office as soon as his second and final term ends in June 2022”.

The organisations added that running for presidency for only two terms “is – almost – the only gain won by the democratic movement on 25 January 2011,” and that the amendments represent a real threat to the political and social stability of the country.

Nazra for Feminist Studies also wrote a research paper titled “The Constitutional Amendments Do Not Establish A Democracy that Supports Women in Politics,” expressing its concern for the democratic transition in Egypt.

“Separating the proposed amendments to Article 102 from the rest of the constitutional amendments and centralizing only raising women’s quotas may not truly empower women,” the paper stated.

“The myopic focus on women’s quotas irrespective of the larger democratic atmosphere governing it may exclude many women, rather than boost their representation and empower them.”

“Symbolic” rights for women cannot replace their active participation as important social actors playing a role in a true pluralist democracy, rooted in a firm belief in women’s diversity and voices and the values of pluralism, equality and freedom for both women and men.”

Following the panel, the two actors were expelled from The Egyptian Actors Union and were accused of “high treason”, as the two actors unilaterally spoke to “external powers” to back the “agendas of conspirators” aiming to undermine Egypt’s security and stability.

A number of youth who were part of the Jan 25th 2011 revolution also expressed opposition.

“I personally believe that supporting it is equal to betraying the revolution and its martyrs,” one source who preferred to stay autonomous told Egyptian Streets, “I also do not think it is completely democratic, I remember that around 20 people were detained for starting a campaign called “لا و النبي يا عبده” against the constitutional amendments.”

Nubian Activists Receive Conditional Fines Up to LE50,000
Egypt's Economic Growth Rate Soars to 5.5%, the Highest Rate in a Decade

Egypt’s Economic Growth Rate Soars to 5.5%, the Highest Rate in a Decade
Nubian Activists Receive Conditional Fines Up to LE50,000