Months after the deposition of Sudan’s former president, Omar Al-bashir, who faces multiple trials in relation to his 30-year rule, has been sentenced to two years in prison for corruption and money-laundering by a Sudanese court.

The ousted ruler, who is 75, will however serve his two-year sentence at a ‘correctional’ facility as Sudanese laws dictate that civilians over the age of 70 not serve prison sentences.

However, with a looming trial regarding the 1989 coup which landed him in power, it is most likely that Al-Bashir will remain in high-security prison Kobar, where he has been detained until all of his sentences are served.

Moreover, since 2009, the deposed figure is still indicted by the International Criminal Court (ICC) in The Hague for supposedly directing a campaign of pillage, mass killing and rape in Sudan’s Darfur region, becoming the first sitting president to receive the indictment.

According to the BBC, one of Al-Bashir’s lawyers indicated that an appeal would be sought against the Sudanese court’s verdict.

In April, after months of civil unrest and anti-Bashir protests over an ailing economy and corruption, Sudan’s Minister of Defense, Awad Mohamed Ahmed Ibn Auf, announced the ousting of president Al-bashir.

The news made headlines internationally as Al-Bashir’s ouster marked the end of a three-decade long dictatorship and the beginning of a politically ambiguous future.

To fill in the political vacuum and to oversee the transition, Sudan’s Transitional Military Council (TMC) swiftly announced a three-year transitional period despite protesters’ insistence on civilian rule which culminated in June’s  “million man” march against TMC.

The protests, followed avidly on social media, were particularly praised in terms of female participation. 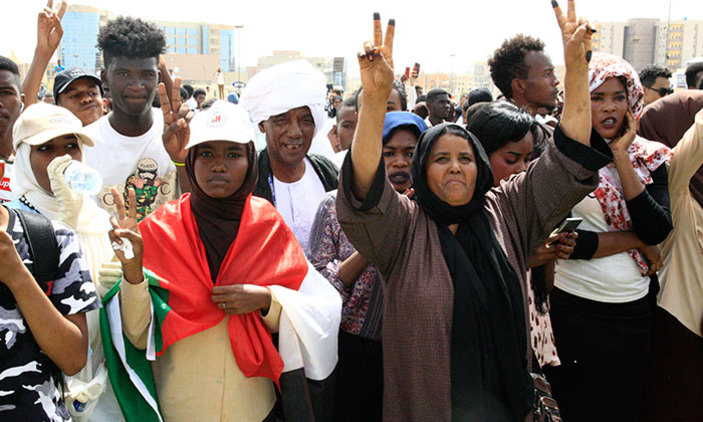 In September, Sudan’s first cabinet, marking a new regime, was sworn in and marked the country’s transition to civilian rule.

Sudan’s economy has been struggling for over two decades after the US placed a 20-year embargo on the country for allegedly sponsoring terrorism. The trade sanctions were recently lifted in October 2017, however, the US government has kept the country on its ‘state sponsor of terrorism’ blacklist.

In support to the southern country with which it has strong relations, Egypt’s Ministry of Foreign Affairs has called for it to be removed the given status since 1993.