The Youth Committee of the Doctors Syndicate announced the death of Noura Kamel on Friday, one of the victims as a result of the Minya microbus accident, bringing the number of deaths to 5 and the injury of 16 others.

The doctors were traveling from Minya to attend mandatory training at the Ministry of Health in Cairo for the women’s health initiative.

The Youth Committee of the General Union of Doctors said in a statement on Facebook, “We will not neglect the right of our colleagues whose lives were wasted due to oppression and abuse from the Ministry of Health.”

The General Union of Doctors, and the heads of the sub-syndicates of doctors in the governorates are meeting today to discuss the urgent problems facing doctors, particularly focusing on the microbus accident in Minya and its repercussions, Al Shorouk reports.

The incident sparked public anger on social media, with many denouncing the ministry’s poor management and lack of road safety, as well as the struggle for worker’s rights.

In a Facebook post by the page, ‘Egypt Doctors‘, it called for “holding Ministry of Health accountable and the officials who threatened the doctors if they did not attend the training.”

It also ridiculed the decision by the minister to grant the families of the deceased a pilgrimage to Mecca, noting that many of the victims were Christians.

Screenshots of Whatsapp messages sent by officials were spread online, showing the doctors being threatened of transfer from the Ministry of Health if they did not attend the training.

Another screenshot showed a doctor saying that they were just notified of the training a day before, giving them little time to organize proper transport. 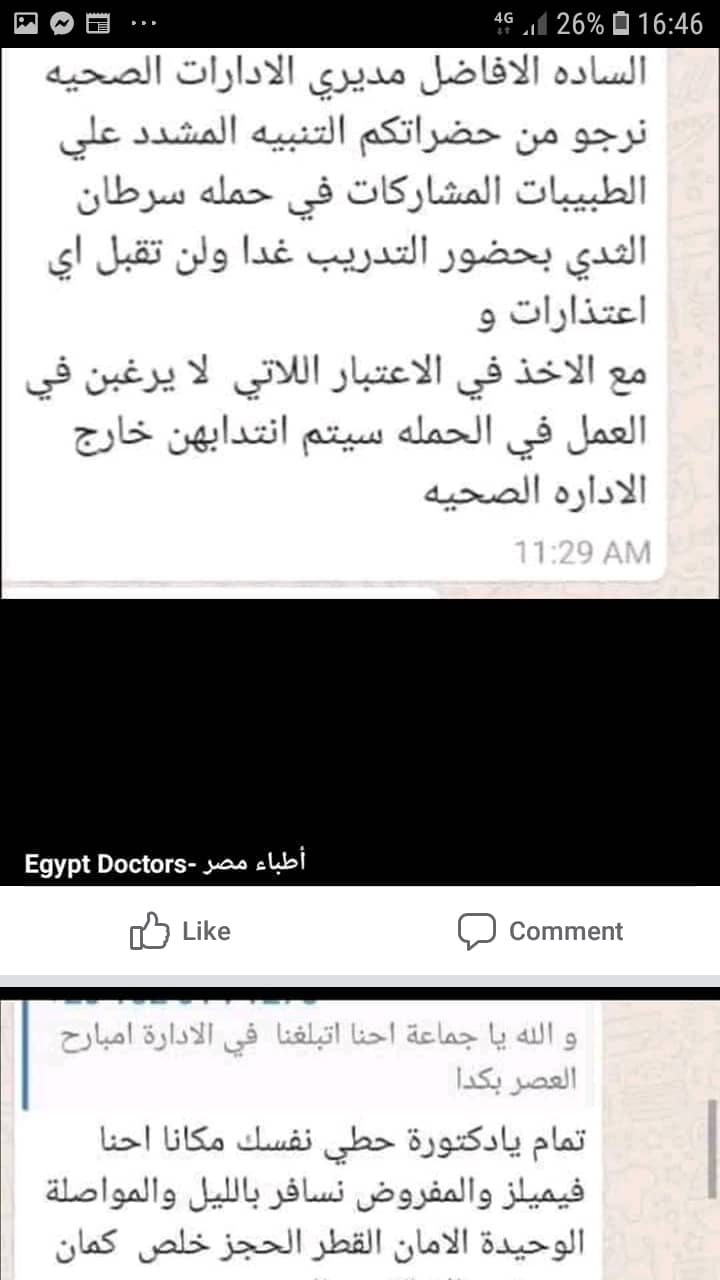 Recently, the International Labour Organization created the new convention on Violence and Harassment, which includes a broad definition of violence that “refers to a range of unacceptable behaviours and practices, or threats thereof, whether a single occurrence or repeated, that aim at, result in, or are likely to result in physical, psychological, sexual or economic harm, and includes gender-based violence and harassment.”

It also broadens the definition of ‘workplace safety’ to the ‘world of work’, which includes: during work-related trips, travel, training, events or social activities, employer-provided accommodation; and when commuting to and from work.