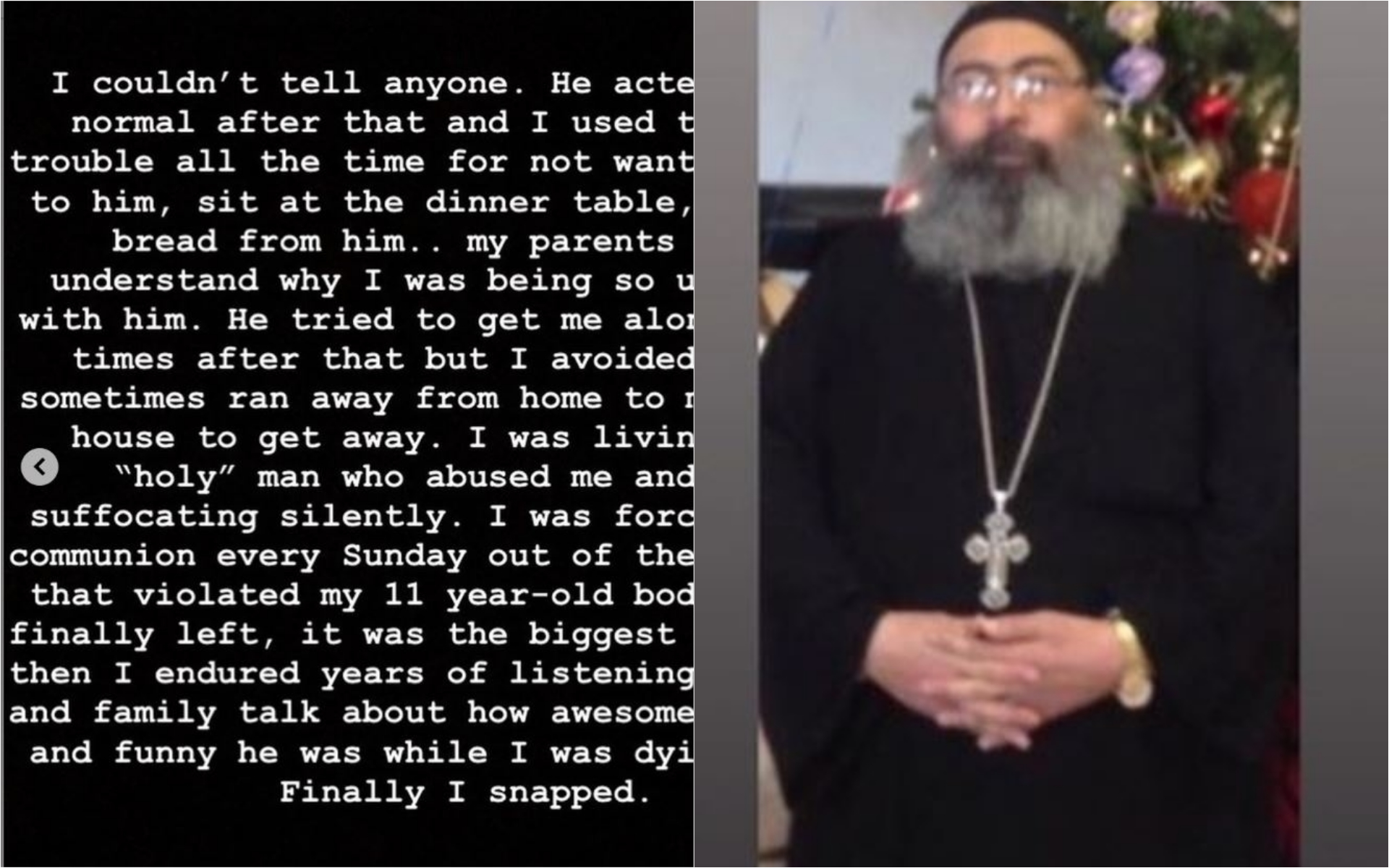 Egypt’s Coptic Orthodox Church’s spokesperson announced on Saturday evening that Pope Tawadros II has decided to defrock priest Rewiess Aziz Khalil, a priest of the Diocese of Minya and Abu Qurqas who had been residing in North America, following allegations of sexual abuse and paedophilia.

The first statement, published on Facebook, was released by the Diocese of Minya and Abu Qurqas, announcing that Reweiss Aziz Khalil had been stripped of his title and returned him to his pre-ordination name Yousef Aziz Khalil.

A separate letter by Pope Tawadros II, Papal Decree 6/20, posted in English on the Church’s spokesperson’s Facebook page, recognised earlier claims by victims of Aziz Khalil that he had previously been defrocked and also announced his defrocking.

“After reviewing the records of the recent investigation related to Reweiss Aziz Khalil, a priest of the Diocese of Menia and Abu Qurkas, who presently resides outside of Egypt, and after taking into consideration the prior decrees defrocking him for his repeated infringements that are unacceptable to the Priesthood and its ministry, we have decided, in addition to our previous decree dated Feb 26, 2014 defrocking him from all ministry in the Coptic Orthodox Church, effective immediately, he is hereby laicized and must return to his former pre-ordination name of Yousef Aziz Khalil. He is hereby stripped of his priestly rank,” read the letter signed by Pope Tawadros II.

“By this decree, we notify all civic authorities in Egypt and in the United States of America to revoke any recognition of Yousef Aziz Khalil as a priest of the Coptic Orthodox Church.” 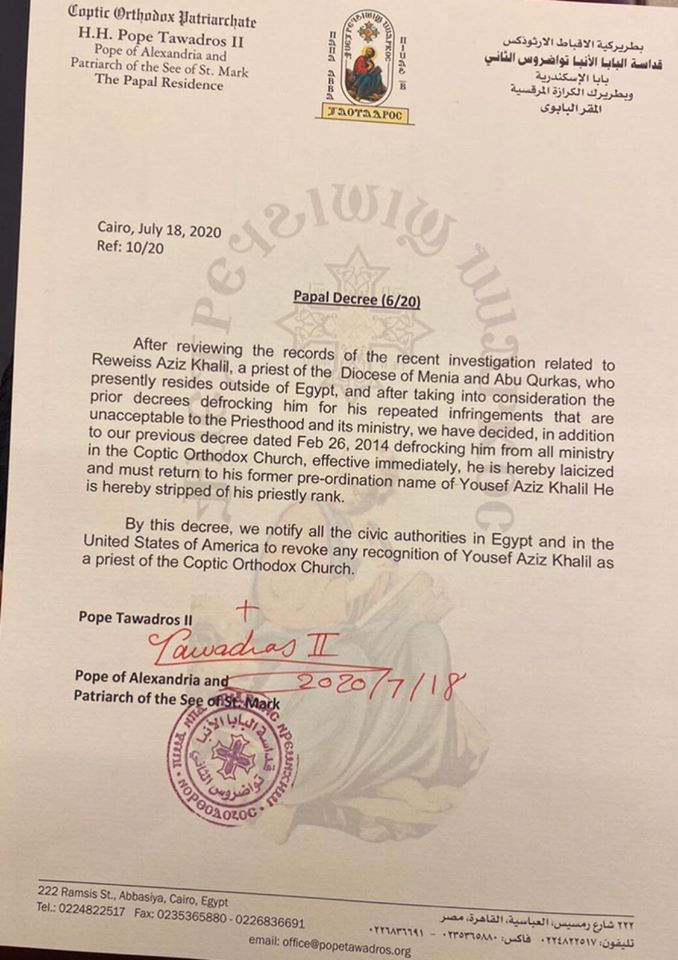 It remains unclear whether Aziz Khalil will face any legal punishment – whether in Egypt or the United States of America – for his alleged crimes and whether the Coptic Orthodox Church will pursue such legal action. It is also unclear how Aziz Khalil continued practising despite being defrocked in 2014 by the Pope.

Writing on Instagram, Sally said she was first abused when she was just 11-years-old:

[TRIGGER WARNING: Text in italics is graphic and contains details of sexual abuse.]

“When I was 11 years old (1997) a Coptic priest from Egypt named Reweiss Aziz Khalil came to Orlando, FL to serve temporarily in St. Mary & Archangel Michael’s church. He often stayed with my family when he was in town. One day Reweiss convinced my mom that I should start confession at a young age so I could get used to it. She trusted him and agreed. I was dreading it but was taught to obey.

He took me to my bedroom and shut the door. He told me to sit on my bed and he sat to the right of me. I was wearing khaki shorts and a white tank top with an American flag on it. He sat very close to me and had his arms around me. I could feel something wasn’t right about this, but I felt trapped.

He started asking me if I have sexual desires for boys and told me sexually disturbing things that I didn’t quite understand at such a young age. He put both of his hands under my shirt and then under my bra. His hands remained there for the for the majority of the time. He attempted to go below the waist but by that point my body was frozen in shock with my arms firmly across my waistline to block him from going into my shorts.

I remember feeling numb and staring at my butterfly clock on the wall and watching time go by slowly as he became more aggressive. He forcefully kissed me all over my face and in my mouth with his tongue. He forced me down, laid on top of me and did what he had to do (while he kept his black tunic on).

When he was finished, he got up and said he was finished. He cleaned himself up and went to open my bedroom door, then turned around and said “remember, we never tell anybody what happens in confession”, and waited for me to nod. Then he let me out of my room and into my new reality. My first kiss was with a priest.”

Sally added that she had first reported Aziz Khalil when she was 16-years-old but that no action was taken.

Aziz Khalil is the latest person to be exposed in recent weeks on social media over allegations of sexual abuse. The wave of exposure of sexual predators was triggered after a man, Ahmed Bassam Zaki, was accused of rape, sexual assault and sexual harassment of more than 50 Egyptian and foreign women. Since Zaki was exposed, a number of other men have been accused of various sexual crimes in Egypt.

Following Zaki’s arrest, Egypt’s Prime Minister Mostafa Madbouly approved a legislative amendment in the criminal code to protect the identities of victims of harassment, rape and assault during court cases. The amendment enables prosecutors to conceal the data of victims coming forward with their reports in order to protect them from possible retribution from perpetrators or external parties.

The decision was praised by many, including the National Council of Women, with hopes that it will encourage more victims of sexual crimes to expose sexual predators.

Any victims of sexual crimes willing to come forward or seeking legal advice can contact the National Council for Women at 15115 or text/Whatsapp +201007525600.