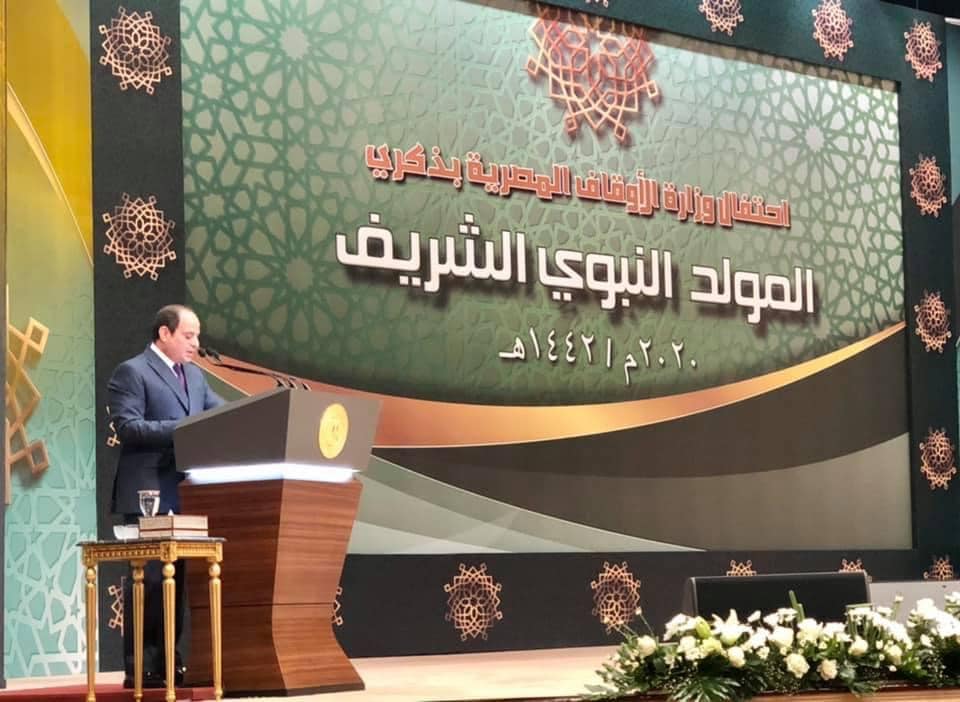 Egyptian President Abdel Fattah Al-Sisi weighed in on Wednesday on the discussion surrounding freedom of expression, following a wave of anger at comments made by French President Emmanuel Macron in relation to cartoons depicting the Prophet Muhammad seen as blasphemous by Muslims.

During a speech marking Moulid El-Nabi (the birthday of the Prophet), Egypt’s Sisi called for respect of the 1.5 billion Muslims around the world and their beliefs while also condemning all forms of violence and extremism.

“We have the right for our feelings not to be hurt and for our values not to be hurt,” said Sisi during his speech, adding that messages “offending the prophets and messengers [of God]” are “disparaging” and that such actions “should stop when it comes to offending the feelings of more than 1.5 billion people”.

“Of the 1.5 billion or more, how many are extremists? One percent? One percent equals 15 million. This is not [the reality] at all,” said Sisi, adding that he categorically rejects any violent or terrorist acts and that the actions of a small minority does not justify offending people’s feelings.

“Freedoms are not absolute”

The Egyptian President also said that freedom of belief and mutual respect is important and that each person is free to believe in what they want to believe in.

“Whoever does not believe, it is their own business…Even people, who, say they hold other beliefs [in Egypt]…We accepted and respected it,” said Sisi, noting that it is also important to abide by the values and principles of other societies.

“What if others do not respect your values and your principles? I think that generosity and good manners ultimately prevail….the message of Islam that we have received…[is a message of] freedom of faith, choice, belief and opinion”.

Though President Sisi stressed the importance of freedoms of faith and expression, he noted that freedoms are “not absolute” and “should stop where they limit other people’s freedoms”.

Meanwhile, Egypt’s Grand Imam of Al-Azhar, the world’s most prominent source of Sunni learning, called on the international community to draft international legislation that would criminalise acts of hate and discrimination against Muslims.

Grand Imam Sheikh Ahmed Al-Tayeb was more vocal than President Sisi in relation to cartoons depicting the Prophet Muhammad, noting that such cartoons “are an explicit act of hostility” and a violation of morals, customs and international law.

At the same time, the Grand Imam urged Muslims to remain peaceful and only act in legal and with rationality when resisting hate speech, urging Muslims around the world to positively integrate into the societies they live in.

During the government event held to celebrate Mould El-Nabi, the Grand Imam also announced an international platform to inform people and correct perceptions about Islam and the Prophet Muhammad.

What is the anger all about?

Earlier this month, French President Macron said that “Islam is a religion that is experiencing a crisis across the world”, referencing terrorist organisations, extremist ideology and radical political Islam.

Macron’s comments came less than a month before 47-year-old French teacher Samuel Paty was murdered and beheaded by Abdoullakh Abouyedovich Anzorov, an 18-year-old Russian-born refugee of Chechen descent. The motive is alleged to be Paty’s display of a five-year-old Charlie Hebdo cartoon depicting the Prophet Muhammad during a class on freedom of expression. The murder was condemned by the Egyptian government and Egyptian religious figures, including Grand Mufti Shawki Allam who said the “crime is rejected by Islam and this act cannot be justified”.

Following Paty’s murder, Macron again condemned extremism and radicalism while also stressing that France would not “renounce the caricatures [of the Prophet]”.

Across the Muslim world, there have been calls for the boycott of France and French brands in response to the French President’s comments.

According to the Guardian, 430 Kuwaiti travel agents have reportedly suspended reservations for flights to France. Meanwhile, French cultural week at Qatar University has been postponed and food distribution groups in Qatar have removed French products from their stores. In Morocco, the country’s Foreign Ministry condemned the republication of French cartoons depicting the Prophet, fuelling popular boycotts of French products in Morocco.