In a press conference on Saturday, 27 March, head of the Suez Canal Authority (SCA) Osama Rabie stated that the Ever Given, the large container ship blocking the Suez Canal and halting over 12 percent of international trade at a fragile moment of the global economy, has moved slightly, but it is not clear whether it will refloat.

So far, 14 tugboats have aided in the moving of the container, and around 20,000 cubic meters of sand have been dredged from beneath the ship. The refloating of the boat, however, is not a simple process as one wrong move could irreversibly damage the ship, according to the Dutch firm Boskalis. The rescue operation could last anywhere from days to weeks.

The head of Boskalis, whose daughter company Smit Salvage has been hired by the ship’s Japanese owning company, Shoei Kisen, to help in moving the ship, announced that in the coming days, heavier tugboats with a combined capacity of 400 tons would arrive to the scene.

According to Rabie, strong winds and limited visibility from a recent sandstorm may have contributed to the accident, however, he affirmed that they cannot be the sole cause, and that similar weather conditions have not previous caused similar accidents, including with ships moving in the same convoy as the Ever Given.

A press release from the Ever Given’s management company, Bernhard Schulte Shipmanagement, stated that “all crew are safe and accounted for.” They further added that no pollution, cargo damage or injury had been reported, and an investigation had already ruled out mechanical or engine failure as causing the incident.

However, Rabie stated that the investigation would only start after the ship has been dislodged, firmly refusing to be drawn into any speculation about the causes.

The incident has already caused widespread shipping and trade disruption, with hundreds of cargo ships reportedly blocked from both sides. The canal is a heavily relied-upon route; an average of 50 ships passed through the canal per day in 2019 according to government statistics. The estimated value of the goods blocked from moving by the jam is USD 9.6 billion a day, and Rabie estimated Egypt’s daily losses at USD 14 million every day. 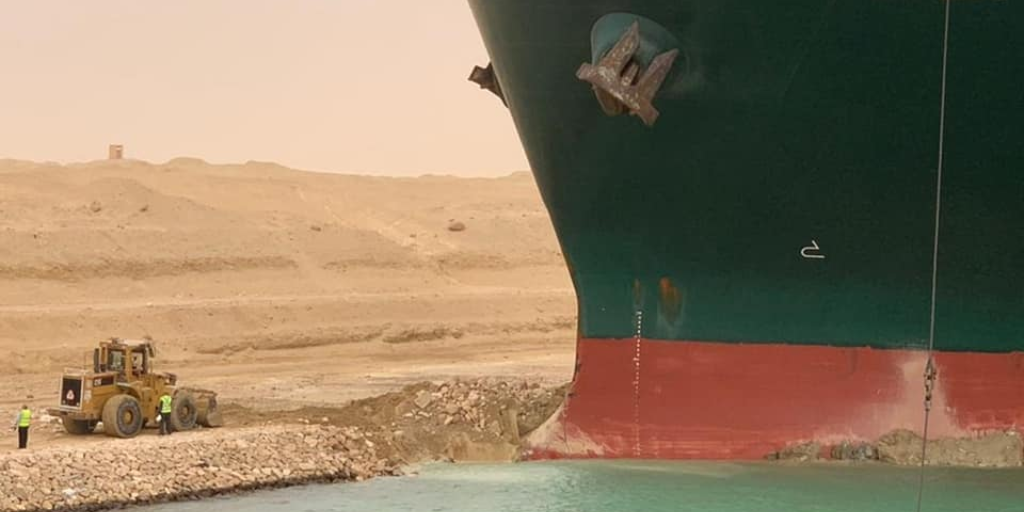 The Suez Canal is one of the world’s most important waterways. The existence of man made canals connecting the Mediterranean Sea to the Red Sea can be traced back to 1310 BC, but construction of the modern canal was completed in 1869. Nowadays, the canal oversees around eight percent of global maritime trade annually, and tolls paid by passing vessels are a vital income source for the Egyptian government.

The block has not only become a worldwide concern, but also an internet sensation, with many internet users closely following every move of the ship’s rescue operation. US President Joe Biden stated that the US is closely following the incident and will be assessing the kind of help it can provide.