Chicken with teen shooki (prickly pear) sauce and chicken with harankash (gooseberry) sauce are just some of the creations birthed by Chef Mohamed Elkaneshy that led him to become a symbol of culinary innovation in Alexandria.

Elkaneshy owns Khubz Sag, a Somouha-based restaurant that offers a variety of unique sandwiches and dishes established in 2020. However, the path leading to him running his current establishment was one riddled with challenges and hurdles.

A Story of Perseverance

“One day you will thank yourself for not giving up,” reads the sign right under his griddle.

At a glance, it may seem like an ordinary motivational quote placed for aesthetic reasons, but in 38-year-old Elkaneshy’s case, it is an important reminder not to let external forces break his spirit.

After spending years working as a chef outside of Egypt in countries like Saudi Arabia and Kuwait, eight years ago his heart longed for his hometown of Alexandria; he decided to return and try to establish his own restaurant.

Armed with only EGP 1,000 (around USD 64) upon his return, a friend allowed him to use his restaurant space, a small eatery in Schutz, Alexandria, on a friendly basis. His funds had dropped to exactly EGP 250 (around USD 16), and he used some of the money to buy supplies to bake his own bread to make cheese sandwiches. His sandwiches soon won the approval of friends and family, encouraging him to buy a used grill and add chicken sandwiches to his menu.

“People on the street would smell the cooking and come to buy my sandwiches, so it encouraged me to get creative,” he recalls.

He decided to experiment with different sauces made with dill, lemon, peppermint, and other flavors he deemed interesting, including coffee and strawberries. His friends would call his creations ‘akk (weird) until they would try the fusion of flavors, and transition to calling him a genius.

When Facebook page Engezni, which specializes in reviewing obscure eateries around Egypt, took notice of his work, things took a “180-degree turn [in a positive direction],” according to Elkaneshy.

“I did everything by myself, even the cleaning and delivery orders. When I’d go out for a delivery order, I’d put a chair in front of the restaurant door with a note saying that I’d be right back. I often worked until four o’clock in the morning,” he explains.

His hard work paid off, with patrons often patiently waiting for three hours to get their food, and still coming back. Motivated by a passion to grow, Elkaneshy then returned his friend’s shop, and teamed up with friends to open up a shop in Kafr Abdu along with a Ramadan tent on Stanley Beach in Alexandria in 2015. The paperwork for the tent kept getting delayed due to bureaucratic procedures, until the tent finally opened – only to get shut down by officials a short ten days later.

Two months after that, the Kafr Abdu shop also got shut down amidst a campaign to shut down establishments in the neighborhood, and Elkaneshy was left feeling frustrated with no prospects.

When he stumbled upon an individual searching for investment opportunities two years later, he seized the new opportunity and bought a food truck powered by solar panels that he was paying for in installments. The truck wasn’t fully licensed yet, and he had grown frustrated and demotivated by how all his attempts to make a living weren’t succeeding.

Knowing this wasn’t a sustainable solution in the long run, Elkaneshy attended an event titled ‘Entrepreneurship and Small- and Medium-Sized Projects: Between Youth’s Dreams and Realities’ organized by the Egyptian Center for Economic Studies. He prepared and delivered a presentation about his food truck and the challenges he’d been facing. After seeing his presentation, the event organizers supported him in the process of approaching the appropriate officials for a license, and he managed to take significant steps towards becoming fully licensed, pending some minor technicalities that were slowed down due to bureaucratic procedures.

However, even after these strides, misfortune struck once again: officials confiscated his truck, along with many others in the area, for incomplete licensing and demanded a hefty fine of EGP 10,000 (around USD 637) – money Elkaneshy did not have.

He was told to pay the fine and shut his business down. Feeling defeated, he reluctantly agreed. It is still parked and unused until today.

“I didn’t know what to do; I wasn’t sure if I should just travel [abroad], but I didn’t want all my efforts to have been in vain. People who’d tried my food would come up to me and say: ‘We know you’ll be back,’ so I thought, Kheir Inshallah, I had to try again,” he recalls.

A Glimmer of Hope 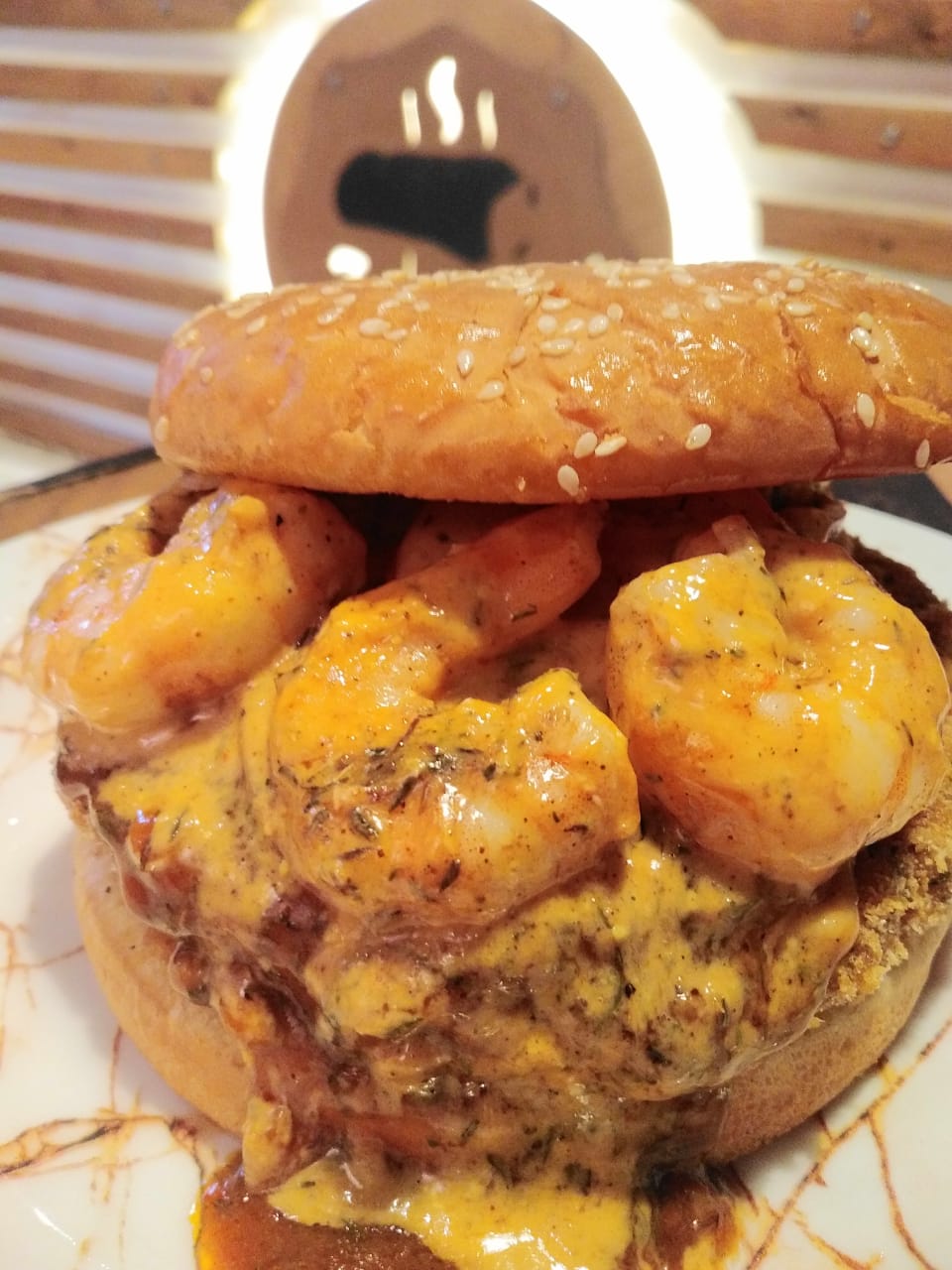 In 2020, he found a small, closed-up shop in Somouha and contacted the owner to rent it. When the paperwork was finalized, he began the long journey of setting up the décor and fixing it, so that it could be ready for operating. In the process, he borrowed money from friends once more, hoping that this attempt would be different.

Once the shop was running, his loyal clientele happily followed him, until COVID-19 hit; his business, along with many others in Egypt and worldwide, suffered.

Elkaneshy is thankful that his business, despite slowing down, still survived. Throughout the curfew days, he would go down to his shop accompanied by only one other employee to try and get as much work done as possible. He is currently working on opening a new branch in Gleem, Alexandria.

“Rabbena karamny (God was generous with me),” he says gratefully, “When you work hard, God sees your effort and doesn’t let it go to waste.”

Like its owner, Khubz Sag is characterized by its unique and joyful nature. Every Tuesday, Elkaneshy innovates a new dish by brainstorming new and creative fusions. During our interview, the dish of the week was shrimp in avocado sauce served on a bed of mashed potatoes.

Thursdays are also a significant day on the Khubz Sag calendar, during which Elkaneshy offers his patrons a special treat where he serves a completely new item of his choice.

“It could be salmon, it could be chicken, it could be anything, and I tell my customers that they can choose what to pay depending on how much they liked the food; they can pay ten pounds (USD 0.64) or 100 pounds (USD 6); I don’t mind, I do it because I like experimenting,” he explains.

Elkaneshy’s story of perseverance does shed light on how challenging it is for entrepreneurs in Egypt to make their dreams a reality, but it also shows how important it is not to give up on one’s dreams, no matter how bleak things may seem. There is, indeed, a light – or in this case, a delicious shrimp sandwich – at the end of the tunnel.