In Arabic, the word qahwa translates simply to ‘coffee’. Said in the Egyptian dialect, however, the word ahwa gains a whole new meaning.

An ahwa is a typical Egyptian coffee house, where ironically, the most popular drink is sweet, black tea. Never in short supply, these informal establishments can sometimes be found crammed by the handful in the narrowest of alleyways, and they are nearly always packed.

The Egyptian ahwa is nothing like the air-conditioned café chains lining the insides of malls and selling lattes to the upper middle class – they are a world of their own. And while some Egyptian ahawy (the plural of ahwa) bear plaques identifying them as the preferred haunts of political activists and literary heroes, others are as quotidian as can be, a place for the idle of body and mind.

And even those are cultural staples. 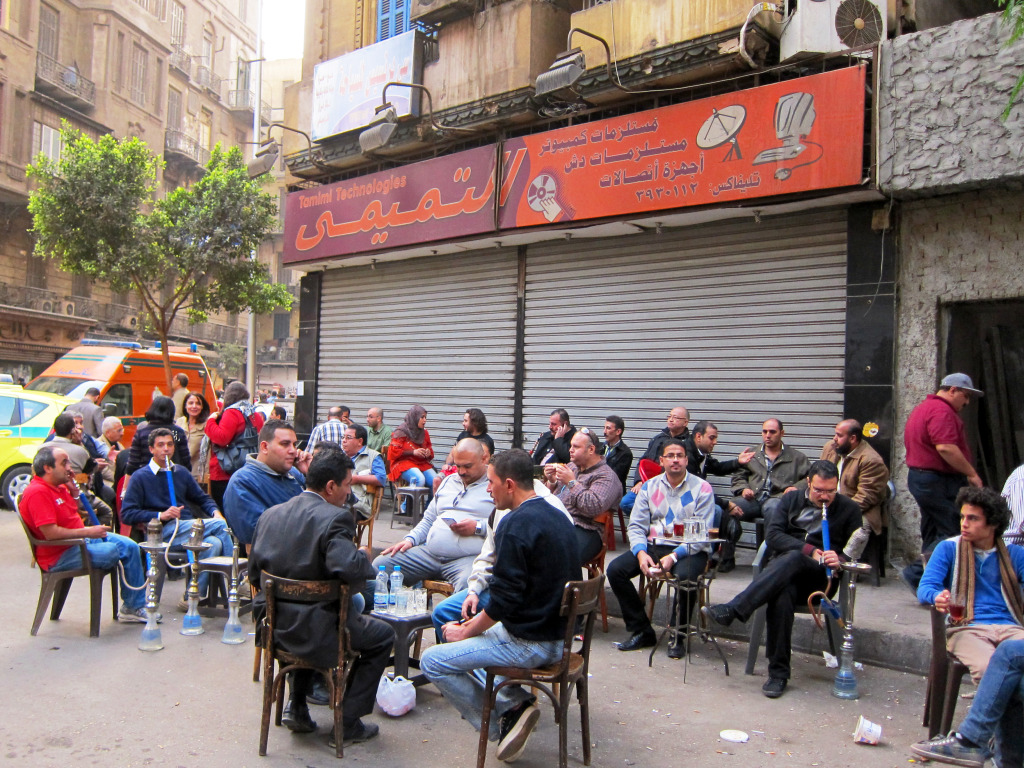 “A traditional Cairene ahwa is like a microcosm of the city: crowded, boisterous, and sensuous to the point of overload; a ramshackle gestalt formed from the swarm of plastic tables and chairs spilling onto the street, the ebb and flow of conversation and laughter, the swirl of fragrant shisha smoke, and the slap-clack-curse of backgammon games,” reads an article published by AFAR Magazine.

An entire vocabulary has formed around ahawy. The phrase shay koshary, for example, refers to boiled water poured directly onto loose tea in the patron’s drinking glass, while shay miza means tea with milk. The word talqima, on the other hand, refers to the level of sweetness of the tea. In Turkish coffee, too, there are names for each level of sweetness, ranging from sada, sometimes also referred to as sketto, which is entirely without sugar, to ziada, which is the sweetest.

Shisha is another essential player at a typical Egyptian ahwa, and it, too, has its own set of terms surrounding it. Hagar is a full serving of a shisha, while me’assel is the flavoured, molasses-infused tobacco used to power these water pipes.

There are two key differences between the clientele of cafés and the clientele of ahawy: Firstly, the items on offer are at a price point that make ahawy accessible to a wider variety of people, allowing the poor and working class a leisurely space to socialise at a cost they can bear. Secondly, unlike the more Westernized cafés, ahawy are rarely frequented by women. In fact, an article published in 2016 by Al-Iqtisadi refers to them as “the Egyptian man’s second wife”.

Though perhaps ‘mistress’ better describes it: Ahawy often feature in jokes as the place men go to hide from responsibilities their wives remind them of. They are frequently referenced as the truth behind lies told to hide idleness and willful unemployment. Aa’ed ‘al ahwa (sitting at the ahwa) is sometimes even used as a euphemism for being out of a job.

Despite this questionable reputation, ahawy are still a symbol of neighbourliness and community throughout Egypt. Being a dime a dozen, each ahwa has its own set of regulars that are usually on first-name terms with the ahwagy (the server or owner). In popular culture they are often portrayed as the place to go for humour, wisdom, and comfort, a place to share in everything from an Umm Kalthoum listening session to an Ahly versus Zamalek football match.

Rarely more than a set of rickety tables and chairs overflowing from the sidewalk, ahawy are the ultimate leisurely haunt for the everyday Egyptian man.