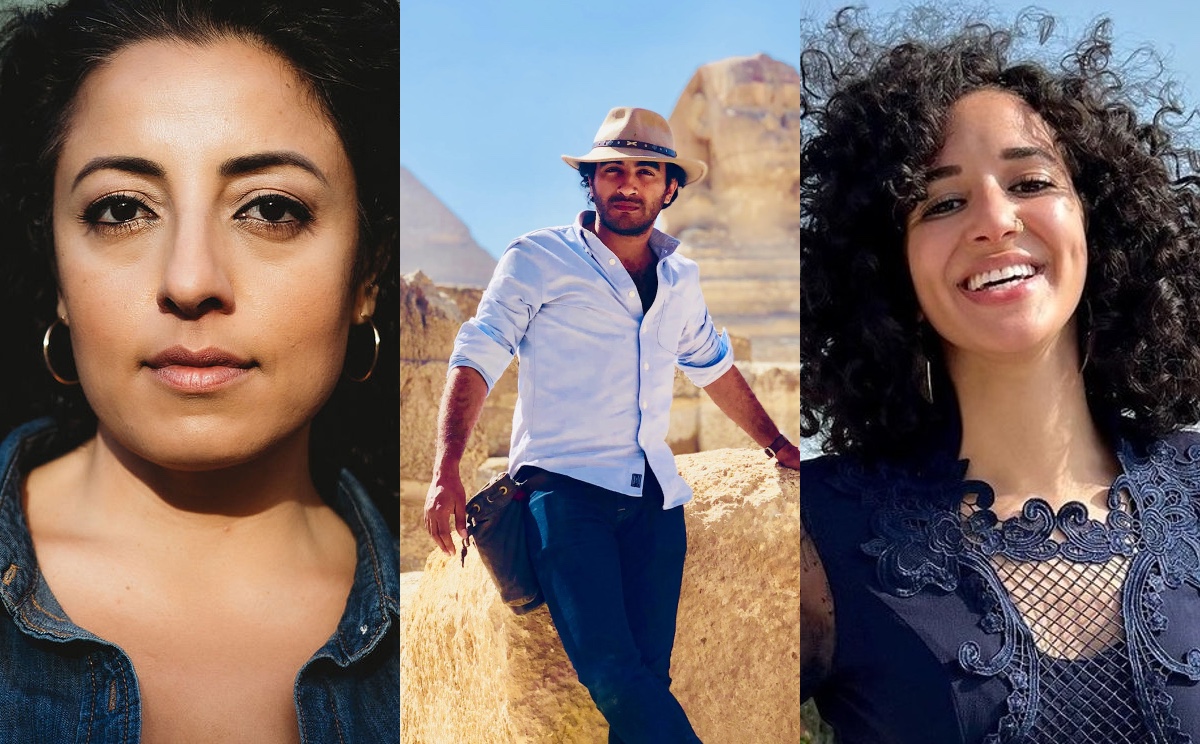 Ever since Disney Plus’s Moon Knight offered what they perceived as an accurate image of their country, both modern and historical, thousands of Egyptians brought discussions of culturally sensitive media representations to the forefront of everyday conversations. Mohamed Diab, the series’ lead director and executive producer, had helmed the project and intentionally championed the involvement of Egyptian creatives like actress Mai Calamawy and composer Hesham Nazih.

Inspired by this new wave of representation of Egypt in Western media, an event titled ‘Walk Like an Egyptian: Media and Myth in Contemporary US Representations’ took place at the Tahrir Oriental Hall of the American University in Cairo (AUC) on Tuesday, 28 July, 2022.

The central theme of the event was the representation of Egypt in popular and mainstream media, criticizing the more archaic works of the past with Orientalist undertones and encouraging ones and creatives that truly act as a substantive mirror of reality.

Generally, representations of the Middle East that immediately come to mind include ‘Desert Nights’ (1929), ‘Thief of Bagdad’ (1940), Elizabeth Taylor’s ever-controversial ‘Cleopatra’ (1963), and the more recent ‘Gods of Egypt’ (2016), which are all widely considered to be offensive.

The host, visiting Fulbright scholar Thomas Simsarian Dolan, who was temporarily a part of the AUC History Department, was well-informed on the topic of Arab and Egyptian representation in United States media. He solely moderated the three panels of the evening: ‘Egypt on Screen’, ‘Writing New Media’, and ‘Making Moon Knight’.

Audiences were listening closely as speakers partook in conversations of identity, exploring what it means to be part-Egyptian. The undeniable attentiveness expanded as panelists focused less on the constantly repeated mantras of more representation and dialed more sober contemplations on the speakers’ own perception of their identity and how that translates into what Dolan calls “a more nuanced representation.”

Panel 1: Comedy, Questionable Hobbies, and the World of Mai’s Vault

The first panel, which aimed to tackle how actors represent Egypt either intentionally or unintentionally, originally included Mai Abdelal, known more widely as the comedic social media content creator Mai’s Vault, and Amin El Gamal, chairman of the MENA Committee of the Screen Actors Guild – American Federation of Television and Radio Artists, who was unfortunately unable to attend.

Before “falling into content creation,” Abdelal and her mother, ‘Mama Wafaa’, were not keen on the realm of comedy. In fact, they had what Abdelal refers to as a “business hobby” where they bought Egyptian-inspired hieroglyphic jewelry and sold it in the US.

As their silly banter and day-to-day interactions on social media gained more traction, Abdelal discovered that social media content creation, which centers largely around everyday life, made her happy and showed her that comedy is a way of self-representation, of creating something of significance for her community, and a medium for delivering a message.

“I love creating comedy content because it’s so natural to who I am, and when you deliver a message and make people laugh while you’re doing it, they receive this message so much more,” she beamed.

Abdelal describes the various challenges and barriers to entry she faces as an Egyptian social media influencer, striving to break into more cinematic comedy fields. “Getting people to take [her] seriously” for mainstream jobs, due to the relative newness of social media, her minority status in the United States, or simply being a woman are core issues Abdelal continues to face.

The second panel tackled the shift in the mediums of representation to new media forms like graphic novels – such as the Ms. Marvel 2019 comic book reboot by Saladin Ahmed – and varying Audible (Amazon audiobook application) series, featured Malaka Gharib and Denmo Ibrahim.

Gharib is a journalist, cartoonist, and graphic novelist born to an Egyptian father and a Filipina mother. Her graphic memoir ‘I Was Their American Dream’ (2019) won the 2020 Arab American Book Award. On the other hand, Ibrahim is an American playwright of Egyptian descent as well as a children’s book author, and actor. Her theater work includes ‘Baba’ (2014), ‘Dream Thief’ (2020), and ‘The Day Naguib Mahfouz Was Stabbed In The Neck And Almost Died a.k.a. The Selkie Play’ (2020).

This panel seemed to have been the most intriguing to the audience, with Gharib and Ibrahim diving into how understanding their identities, “the hyphenated experience” of being part Egyptian and part American, and thus how their form of representation is fluid, “a work in progress” formed by “trying to be a full person with a complex past,” as Ibrahim described it.

For her, the salience of coming of age and growing up in the States was overshadowed by the efforts to fit in and the subsequent gravitation towards the American identity. Slowly, with questions of identity emerging, Ibrahim started to acknowledge that her generation, born and raised in America, can be held in sharp contrast to their immigrant parents. It was thus essential for her to unpack her current realities independently as an American alongside exploring her Egyptian family’s history in order to thoroughly understand her dual identity.

The journey of identity is not smooth sailing, especially taking into account institutional obstacles in the US such as the absence of an Arab or North African option in the US Census, which both speakers say “erases” Middle Eastern identity.

Gharib, whose Egyptian father aspired to Americanism, was the first of her family to go through “the struggles of being a second generation American.” Her early ideas of America were white, which she claims now as utterly false. At 16, however, assimilating into white culture was crucial to be considered one.

Living primarily only among caucasians, Gharib’s earlier memories did not include any brown friends; she had subconsciously whitewashed herself. Only at 29 years old did she question her need to alter her self-image and resorted to food to reintroduce herself and flesh out her identity.

“Why do I have to do any of these things [assimilate into white culture]? I would just like to be the culture that I am, and I actually had to go back to my roots and would relearn the fundamental things about my culture. One way was to start taking Arabic classes. I started cooking more Filipino and Egyptian food at home. I started making friends with Filipino and Egyptian people.”

Ibrahim, when answering Dolan’s question about whether they feel like they have multiple or mixed identities and if they can parse the Egyptian from the American, answers that “As I get older, there is a sense that identity is in conversation with the world. […] Especially through creative work, identity becomes much more of a fluid conversation.” She begins.

“Even as you’re asking which part of me is american […], it’s the way I think. Which part of me is Egyptian, I think there is this part of legacy, where I come from, and what’s passed down,” she continued. “Beginning to inquire what it means to be Egyptian-American, it became very clear to me in my early 20’s [that] there is this longing to explore what came before me, so that identity feels like this very fluid conversation that comes through […] in creative work.”

Brought together through their work on Moon Knight were the speakers of the last panel, cultural consultant Rhonda Ragad and Egyptologist Ramy Romany.

Ragab, whose job entails correcting harmful stereotypes and ensuring inoffensive, positive portrayals of minorities, sees her mix of Egyptian-Americanness as a product of her parents pushing her to embrace her identity. Something which she believes led her to her current career path of cultural consultancy for major studios and media conglomerates.

Her secret to gaining footing in the industry and engaging with these clients is that “you should only do things you are curious about…” and learn to “have the heavy conversations and say what needs to be said.”

On identity in general, Romany mentions the importance of embracing one’s own. Yet, to him, creatives should not limit themselves to stories related only to their identity. “Only linking an actor to Egypt or Middle Eastern culture is part of the problem, not the solution,” said Romany. Hard work and a great attitude to him is far more indispensable for success.

Of Moon Knight, the two sang the praises of the inclusive environment.

“I instantly noticed how involved and how intentionally all the writers at Disney wanted us there. It wasn’t a check the box type meeting or consulting that I would generally do. They were really involved and wanted to make Moon Knight full on as close to real as possible,” Romany recounted.

“They sat there and listened to Rhonda’s stories and mine about Egypt and ancient Egypt, and started extracting from that all the historical script of Moon Knight. There was a massive push to make it not as much about the comics, but more about factual history and culture of Egypt.”

Ending the panel, Romany also gave a memorable statement on the perceived dominance of non-Egyptian Egyptologists and lack of Egyptian ones in the field — a point of view he did not share, citing Zahi Hawass, former Minister of State for Antiquities Affairs, as his “godfather” and referring earlier to his old professor, current Egyptian Minister of Tourism and Antiquities, Khaled Al-Enany.

Representation is a topic set to remain at the forefront of conversations about media for the time being, with more and more actors, creators, and studios seeking out minority actors even for non-minority roles.

Given that most of the panelists were Egyptian-American, save for Egyptologist Ramy Romany, the majority of the event’s dialogues centered around that particular background, acting as a limitation of the viewpoints offered in the events.

Nonetheless, with the aid of dedicated consultants like Ragab, directors and Egyptologists like Romany, actors like Abdelal, and self-critical creators like Gharib and Ibrahim, the task should not be burdensome but freeing. It would open up realms of possibilities for creativity and exploration not yet imagined.