The Influence of Talk Shows on Egyptian Society: Harmless or Alarming?

Shereif Barakat
The Influence of Talk Shows on Egyptian Society: Harmless or Alarming? 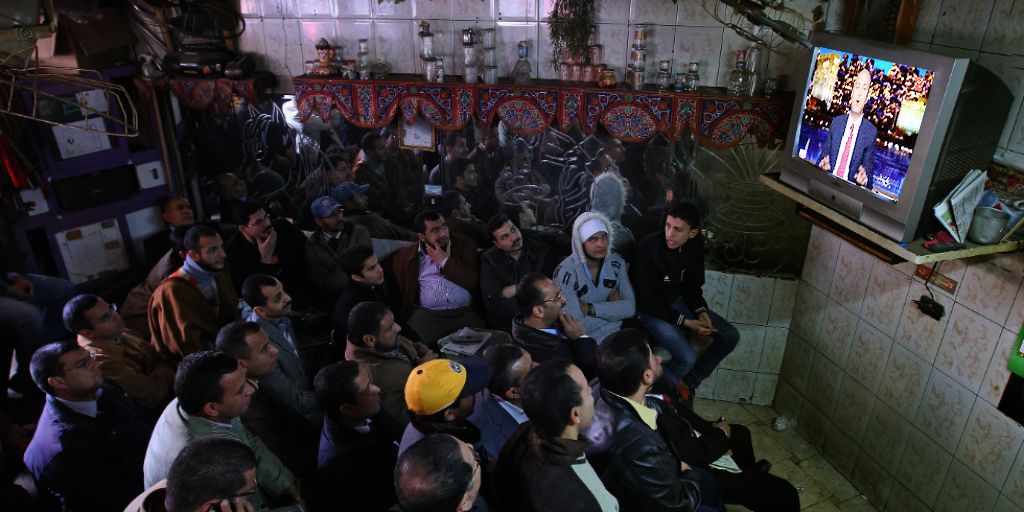 When Egyptian talk show host Yasmine Ezz dedicated an entire monologue to remind her female viewers that wives’ primary purpose is to always comfort and support their husbands, it sparked a nationwide social media debate on gender roles and patriarchal tropes.

Whether viewers agreed, disagreed, or mocked the segment, it was evident that talk show hosts’ opinions generated online traffic and stir debates.

Studies that delve deeper into societal talk show viewing indicate that the discourse that comes out of talk show segments could even shape Egyptians’ opinions.

“Online media expanded the opportunities for political discourse on Egyptian television at critical moments in national politics, suggesting a breaching of the satellite-Internet divide,” writes Naomi Sakr, a professor of media policy.

The psychological effects of television viewing on human behavior and beliefs is a long-running field of research – from a 1970 study on the effects of Sesame Street on children’s literacy and behaviors to a recent study on the trivialization of political opinions for adolescents through talk show segments.

With the advent of social media, which allows for online public spheres to discuss popular talk show segments, Egypt’s talk show programs have managed to reach a wider, more digital audience – a media revolution recognized by members of government.

In today’s space of interconnected media channels, the opinions of talk show hosts stir controversy and influence a vast number of Egyptians. More significantly, the discourse presented in talk shows, at times, showcases an increasing disconnect between the hosts and the viewers.

This begs the question: what is Egypt’s government doing to prevent potential negative influences on society by talk show hosts?

In 2019, Egypt’s Supreme Council for Media Regulation, the country’s authoritative body for mainstream media, issued 21 rules to talk shows to prevent the programs’ potential influences on society. A few of these rules include focusing on current events, coordinating with state news platforms, and upholding a positive image of Egypt.

Amin’s comments were treated as hate speech by Egyptians, with the talk show host receiving further criticism from parliamentarian Osama Al-Hawari, who himself is an Upper Egyptian.

“It’s absolutely unacceptable for any person, place, or entity to disrespect, discriminate, or offend [Upper Egyptians],” proclaimed Al-Hawari during a live interview in 2021.

Reham Saeed, another talk show host, was also banned from broadcasting in 2019 due to a segment that fat-shamed women. This was not Saeed’s first suspension, having previously sparked controversy in 2015 for leaking a domestic abuse victim’s personal photos to the public in what was a highly-publicized case.

Saeed would later interview the victim, asking her questions that suggested that she was to blame for her own domestic abuse case.

“Don’t you think your clothing was somewhat inappropriate for a place like a mall? Maybe your clothes gave the man the impression that you’re not a ‘good girl,’” asked Saeed.

Ironically, Saeed’s photo leak inspired Amin himself to call out Egypt’s talk show hosts, claiming that the field has been degrading for some years.

“This case showcases the chaos and unprofessionalism of Egypt’s media current climate […] with each story we stray further and further from media ethics, as every talk show host acts as a kingpin who can’t be answered to,” declared Amin.

Still, Egypt’s talk show programs continue to generate widespread backlash and debates. Certain talk show hosts, such as Amr Adeeb and Yasmine Ezz, do not face repercussions for their problematic comments and segments, further suggesting that there is a potential disconnect between the talk show hosts’ dialogue and the viewers.

Adeeb, one of Egypt’s most popular television personalities, and host of the Al-Hekaya (The Story) talk show, made this disconnect evident during a speech in which he called upon citizens to change eating habits due to Egypt’s increasing commodity prices during the beginning of the Ukraine-Russia war.

“Some people say they only eat organic eggs; this is not the time for [organic] eggs. Eat it with pastrami and it will taste the same [as regular eggs],” said Adeeb on 7 March 2022.

Adeeb, whose talk show amasses over a billion total views on YouTube, later suggested that Egyptians should consider baking bread at home to cut costs.

His comments would spark severe social media backlash, with viewers highlighting his disconnect from the struggles of Egypt’s poor and working class during the country’s recent economic struggles.

Egypt’s media environment experiences a new story practically every day – some good, some frustrating, and some tragic. Even with the growth in social media usage, talk show hosts remain at the forefront of those news stories, responsible for keeping Egyptians informed.

Yet recent talk show segments, more specifically the controversial opinions being promoted, beg the question of whether current talk shows influence rather than inform.

The Sounds of Africa’s Climate Crisis: Guardians of the River
Where Egyptian Women Can Get Free Breast Cancer Screening

Where Egyptian Women Can Get Free Breast Cancer Screening
The Sounds of Africa’s Climate Crisis: Guardians of the River