Egypt’s Favorite F Word Is Fear: The Art of Shying Away from Mental Health Awareness 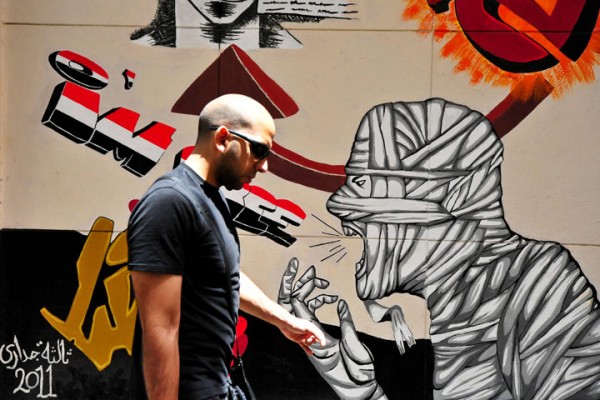 Shrouded in a murky atmosphere of negligence, mental illnesses walk hand in hand with a word Egyptians are quite intimate with: stigma. In fact, Egyptians are extremely terrorized by psychological sicknesses to the extent that AlAbbasiya’s Mental Health Hospital served as the perfect setting to one of Egypt’s best-selling horror novels, Alfil Alazraq (The Blue Elephant) by Ahmed Mourad.

The roots of the stigmatization are embedded so deeply into our society that digging them out is almost a utopian dream. We may binge watch 13 Reasons Why and use the phrase “enta etganent? (Have you gone mad?)” on a daily basis, but we are in no way educated enough about mental health issues and their dangers.

Frankly, it seems like illnesses such as schizophrenia and Post Traumatic Stress Disorder (PTSD) are mostly utilized to create layered, captivating fictional characters that are worthy of an audience’s attention. But with the fictionalization of our minds’ vulnerabilities, are we subconsciously forgetting that mental illnesses aren’t fictional at all? And why is the term mentally ill associated with an irrational fear amongst numerous Egyptians?

With ignorance prevailing in Egyptian society, the fear and negligence spread out to form a vicious cycle of stigmatization.

Doctors are advised against becoming psychiatrists, with absurd echoing ideas such as: a mental illness doctor will inevitably become mentally ill himself. Those who actually choose to pursue the career in a public clinic or hospital to aid the poverty-stricken victims end up with a ridiculously huge number of patients per day, due to the scarcity of medical professionals, proving that the tabooed topic does not only affect its victims, but expands to torment those who try to help them as well. Patients are often disregarded and seen as being overreacting, seeking attention or acting spoiled.

Most patients – especially from  lower economic standing – who are diagnosed with mental illnesses receive late diagnosis, usually after years of visiting a myriad of self-proclaimed exorcists commercializing mental illnesses. Public hospitals offering mental health services to the underprivileged are both unbelievably few and extremely overcrowded.

On a sweltering day in mid-June, Mostafa, a frail 12-year-old from Fayoum diagnosed with schizophrenia, sits across a renowned psychiatrist at Ain Shams University’s specialized clinic for mental illnesses, with his eyes fixed on the floor. In the small, almost suffocating room, he has just seven minutes to do a follow up with his psychiatrist, who has to sit with almost 70 other patients every day.

Across the hall, a 37-year-old man named Ahmed, diagnosed with both bipolar disorder and schizophrenia, should have been booking sessions once every two weeks with his psychiatrist, but instead he visits once every couple of months because he lives four  hours away in another district, El Minya, which does not have any local psychiatric facilities.

These are merely two examples of the thousands of people who suffer on a daily basis due to the lack of proper care and attention this issue receives in Egypt.

The Middle East Monitor reported that Menan Abdel Maqsoud, the head of Psychological Health and Addiction Therapy at the Ministry of Health stated that “3 percent of Egyptians have anxiety and mood disorders” which roughly makes for 2,9 million Egyptians assuming that the latter are living inside of Egypt which has a total of almost 97 million inhabitants according to CAPMAS.

In a country where even suggesting that one needs to go to a therapist or a psychiatrist for professional help is perceived negatively, there is still much lacking in terms of raising awareness about mental health illnesses. Moreover, everyday Arabic doesn’t take on the variety of linguistic terms for mental health illnesses like in English, thus people are by and large unfamiliar with the plethora of mental afflictions that could be plaguing them.

Denying the existence of mental illnesses and not offering the proper facilities and faculty to treat them does not solve a problem, but rather creates one.

The stigma surrounding mental health in Egypt mainly arises from stereotypes and misconceptions, therefore the importance of raising awareness cannot be stressed enough. Psychological pain is a torment many underestimate.

It has to be acknowledged that throughout the last several years, Egypt has seen improvements in the general attitude towards it; however, campaigns and awareness-raising programs are mostly allocated at the middle and upper classes (where a session with a therapist can cost between EGP 250 to EGP 1500), with the unprivileged class being largely ignored.

With over 30 percent of the population living below the poverty line, we simply must work harder at dedicating enough resources to addressing the issue and helping out those who are silently in distress.