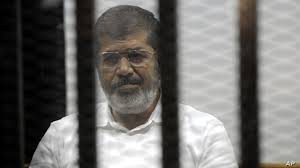 Egypt’s former president Mohamed Morsi, who was toppled by the military in 2013, died of a heart attack at the age of 67 after a court session on Monday.

Egyptian state TV reported that he fainted after a session where he was being trialed for espionage. He was later transferred to an unknown hospital.

Egypt’s prosecutor-general Nabil Sadek issued a statement revealing that Morsi was allowed to speak during his trial per the defendant’s request before walking back to his trial cage and collapsing.

According to the statement, “Morsi spoke for five minutes before the court adjourned the hearing and moved the defendants back to the trial cage.”

“After returning to the trial cage, Morsi fell unconscious and was immediately transferred to the hospital. The initial medical examination of Morsi showed that he had no pulse, no indications of breathing and his eyes were open and unresponsive to light or stimuli,” the statement clarified.

“Morsi was dead when he arrived at the hospital at 4:15 pm with no signs of any injuries on his body.”

Morsi, who was deposed on July 2013 after mass protests against his government, had won Egypt’s first free democratic elections following the toppling of his predecessor Hosni Mubarak in 2011.

*This is a breaking news story and is still developing