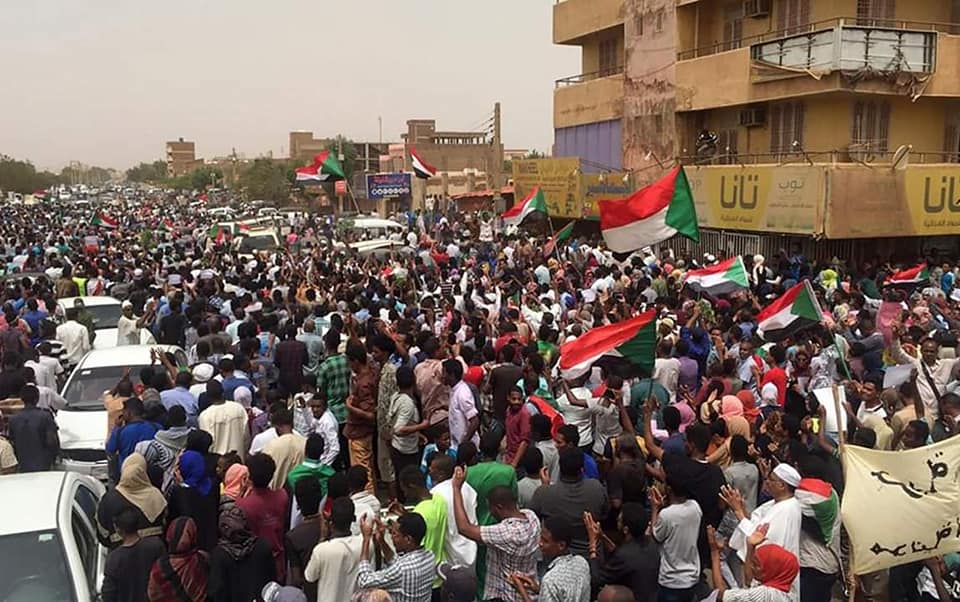 Today, Sudanese protesters are marching a “million man” march towards the presidential palace to stand against the currently ruling Transitional Military Council (TMC) demanding them to hand over power to the civilians.

According to the BBC, Sudan’s security forces attacked civilians with tear gas in an attempt to disperse the march.  As of now, one protester has been killed. The forces have also closed down Al Manshia Bridge, that connecting Khartoum with its sister city Omdurman, to make sure protesters remain scattered.

This is the first mass demonstration since the military crackdown that took place in 3 June killing at least 128 protesters.

Sudan is under an internet blackout in an attempt to prevent civilians from sharing what is happening inside the country on social media.

However, since the massacre “#BlueforSudan” has taken over the internet and evolved to a movement with dozens of celebrities and influencers changing their profile picture to blue to raise awareness to the events in the country.

Today, the “one million-man march” trended on Twitter in several countries across the Middle East including Egypt and UAE.

In 30 June 1989, the ousted Sudanese president Omar El Bashir was sworn in to power  in a coup. 30 years later he was toppled after 4 months of protests and a mass sit-in.

“We are here for the martyrs of the [June 3] sit-in. We want a civilian state that guarantees our freedom. We want to get rid of military dictatorship,” a 23-year-old protester named only as Zeinab told AFP news agency.

On Saturday, the Janjaweed, also known as the Rapid Security Forces (RSF), dispersed the news conference done by the protest organizers, Sudanese Professionals Association (SPA). After the crackdown,  discussions between the Transitional Military Council (TMC) and the opposition have subsided.

The protests were triggered by recent economic hardships leaving civilians hopeless. Prices of bread have doubled to three pound per piece of bread. The limited supply of petrol has queued citizens for hours at gas stations across the country and empty ATMs have left people cashless. The highest price for 1 USD equals SDG 72 in the black market as of April 2019, up from around SDG 20 in last January 2018.

Sudan’s economy has been struggling for over two decades after the US placed a 20-year embargo on the country for allegedly sponsoring terrorism. The trade sanctions were recently lifted in October 2017.

The country’s economy further plunged after South Sudan seceded becoming the world’s youngest independent country in 2011. Oil exports was Sudan’s main source of foreign currency, yet after the divide, most oil fields are now located in the independent state of South Sudan costing Sudan three quarters of its oil outputs.

Although the demonstrations began as a youth movement, gradually they have gained the support of professionals including doctors, professors and the middle-classed segment of society.

The protests in Sudan, compared with the unfurling and contemporaneous events in Algeria, have sparked Egyptians to reflect over the current political situation in the country as well as the future of Sudanese-Egyptians relations.