In a statement shared by Iranian state media outlets, the military admitted that a “human error” had resulted in the passenger plane being shot down.

The statement said that the plane had been misidentified for a hostile target after it flew near a sensitive site controlled by Iran’s Revolutionary Guards, adding that those responsible would be held accountable.

“The Islamic Republic of Iran deeply regrets this disastrous mistake. My thoughts and prayers go to all the mourning families. I offer my sincerest condolences,” said President Rouhani. 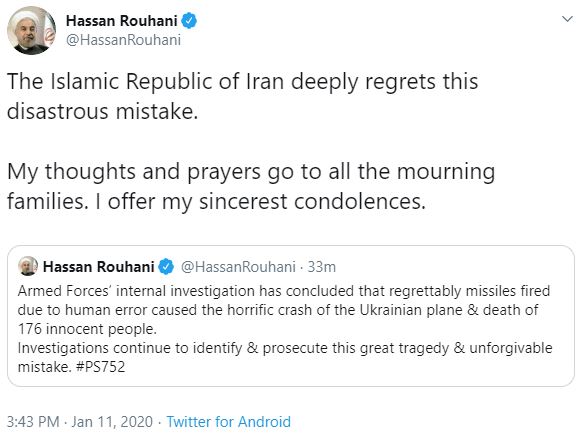 Meanwhile, Iran’s Foreign Minister Javad Zarif offered his apologies and condolences and said that it was a “sad day”.

“A sad day. Preliminary conclusions of internal investigation by Armed Forces: Human error at time of crisis caused by US adventurism led to disaster. Our profound regrets, apologies and condolences to our people, to the families of all victims, and to other affected nations,” said Zarif on Twitter. 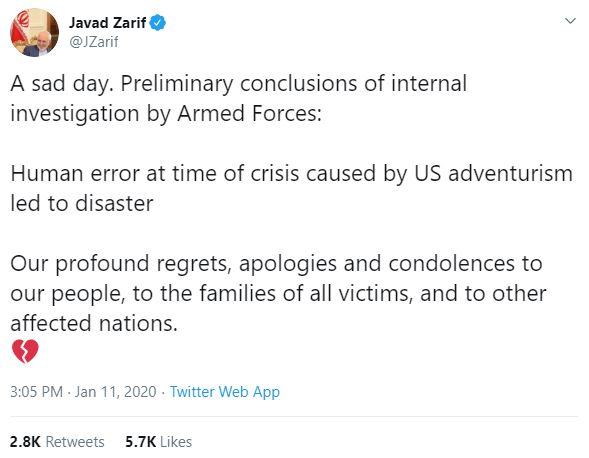 Iran’s statement comes after a number of Western countries had said intelligence showed evidence the passenger plane was shot down.

“This reinforces the need for a thorough investigation,” said the Canadian Prime Minister, asserting that Canada, which lost 63 Canadians in the plane crash, deserves answers.

Flight PS752, a Boeing 737, had been bound for Kiev from Tehran when it crashed on 8 January 2020. The plane crashed minutes after take off from the Imam Khomeini airport in Tehran with 176 people and crew on board, reported Iran’s Tasnim News Agency.

The crash came hours after escalating tensions between Iran and the United States of America as a result of the killing of Iranian General Qasem Soleimani.

In the early hours of 8 January 2020, Iran announced it had launched missiles at two air basis in Iraq that house United States and Coalition troops. The Iranian attack increased fears of an outbreak of war between Iran and the United States.