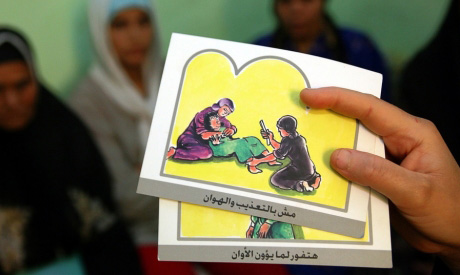 According to Egypt Today, an Upper Egyptian man who had reported his wife for taking their daughters to undergo female genital circumcision turned out to be the one who had taken them as per official investigations.

Social media reports circulated online where it was told that the 49-year-old man, Nour El-Din, a laborer who lives with his family in Qena, supposedly reported his wife for taking their daughters to be circumcised. However, the 12 year-old and 10-year old daughters have come forward to admit that it was father who had taken them to an outpatient clinic, with their mother’s knowledge.

As per Egypt Today, the man and his wife had been having domestic problems for four years, were living separately; the man was also not paying his children’s expenses. Accordingly, the wife took the man to court where he was ordered to pay LE 30,000 and sentenced to a conditional month in jail in the event that he failed to pay the fine.

In retaliation, the man accused his wife of taking the children to an FGM practitioner.

It is not clear what happens to accomplices who know of the upcoming process, but do not try to halter it.

Divorce has been a growing phenomenon in Egypt with more resources and laws being implemented in order to aide divorcees as the act is still perceived as taboo or unfavorable among certain segments of Egypt’s conservative society.

Many Egyptian marriages are rife with physical and verbal violence as well as marital rape which is not recognized as a crime by Egyptian law.

In 2017, President Abdel Fattah Sisi called for a reform to the law regulating divorces. Although met by resistance from Al-Azhar, he stated that the new law should require both the husband and wife to be involved in the divorce process.